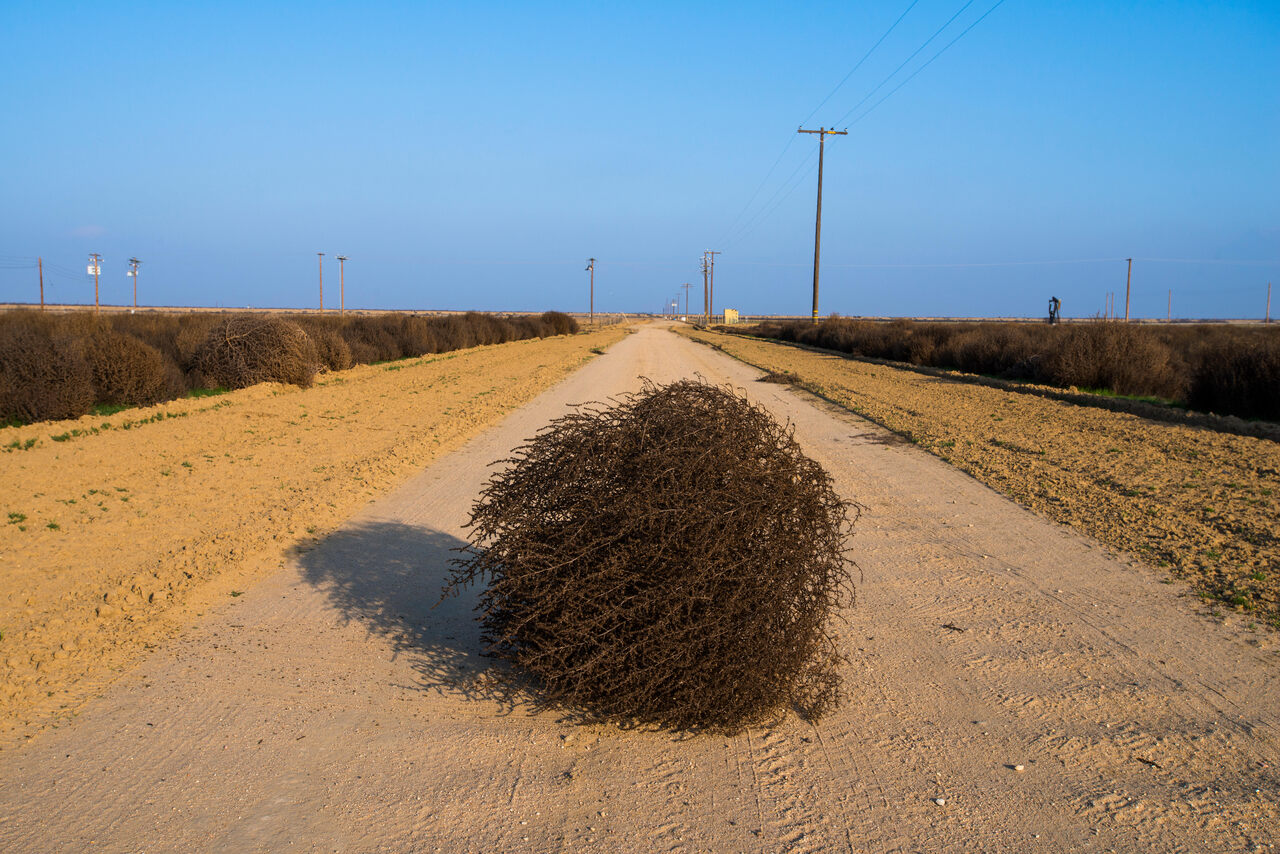 A tumbleweed making its way across Lost Hills, California, in 2013. National Geographic Image Collection/Alamy Stock Photo
In This Story
Place

Albuquerque found the perfect use for tumbleweeds at Christmastime.
Place

Every Christmas one Arizona city makes the most of its dry climate by creating an arid desert tannenbaum.

Shana Welles stands five feet eight inches tall. Not a remarkable height for a human, like Welles, but downright soaring for a tumbleweed. Welles is an evolutionary ecologist studying plants, and occasionally, out in California’s Central Valley, she’ll find the rare tumbleweed that goes head-to-head with her. The weeds have a long history of going a bit rogue—and as Welles and a collaborator report in a recent paper in AoB Plants, a newer tumbleweed on the scene, Salsola ryanii, may be especially poised for a growth spurt.

To the blissfully uninitiated, “tumbleweed” might evoke a desiccated plant blowing through a dusty ghost town, ricocheting off cacti to the tune of a low, whistling soundtrack. Long before it gusts along as a ball of branches, though, tumbleweed is green—“a good, true, medium green,” Welles says—and feisty. In Central California, the annual, invasive plants are everywhere: “If you’re driving down the road and know what to look for, they’re really obvious,” Welles says. The iconic somersaulting comes at the very end of a tumbleweed’s life, when a part of it breaks off and bumps away, sowing seeds all the while.

Several species fall under the “tumbleweed” umbrella, and they landed in the U.S. from Asia and elsewhere in the late 19th century. When she was pursuing her PhD work at the University of California, Riverside, Welles—now a postdoctoral fellow at Chapman University—zeroed in on Salsola ryanii in particular. S. ryanii intrigued her because it’s an allopolyploid: a hybrid species that has complete sets of chromosomes from both of its progenitors, Salsola australis and Salsola tragus (also known as Kali tragus), all of which are commonly called Russian thistle.

Allopolyploids aren’t so unusual in the plant world—some wheat and strawberry species are allopolyploids, too—but, Welles explains, those arose long ago. S. ryanii, on the other hand, formed fairly recently, Welles says—probably in the last century, which is barely a blink in evolutionary time. She and her co-author, Norman Ellstrand, a plant geneticist and Welles’s advisor at UC Riverside, figured that studying it now, while it’s still a relative newcomer, would give them good insight into whether allopolyploidy gives the plant an edge.

To see whether S. ryanii’s lineage makes it particularly formidable, Welles and Ellstrand planted the three species next to each other in a test garden and compared the whole crew over two years. They measured mass and volume, and gauged seed count by looking at a single branch on each plant and extrapolating from there. S. ryanii trounced the others across the board; in the first year, it had twice the mass of its forebears. (To prevent the “vigorous” seeds from spreading, the researchers offed the plants before that part detached and roamed away.)

S. ryanii may be tough, but it’s hard to say how many of the plants are getting ready to tumble. Back in 2012, Welles and Ellstrand conducted a survey across California and found that, while the plant’s range had expanded compared to previous counts, the species was still much less common than its progenitors. It’s tough to eyeball an estimate because, at a glance, they all look so similar. “Even people who are botanists but don’t work on this species would have trouble telling them apart,” Welles says. (When in doubt, she looks for molecular markers.) But it’s likely that as the range continues to expand, S. ryanii will be a force to reckon with. A single tumbleweed plant can hold upwards of 100,000 seeds, and S. ryanii’s forebears sowed theirs all over the place: S. tragus, for instance, has put down roots in almost every U.S. state.

Though Welles and Ellstrand didn’t dig into potential strategies to curb the spread of the wily weed, someone probably should. For generations, people in the Southwestern and Western United States have waffled between trying to make peace with tumbleweeds (for example, by stacking a whole heap of them into a glittery, makeshift Christmas tree or a grinning snowman) and trying to defeat them, as residents in California’s San Bernardino County did back in December 1977, when prolific tumbleweeds nearly smothered a trailer park. Crews hauled away five truckloads of the roving plants, which had barricaded doors and sparked “literally hundreds of calls” from complaining residents, Jim Rodgers, hazard abatement officer for the Central Valley Fire Prevention District, told The Sun-Telegram newspaper at the time. Drifting tumbleweeds can also plug up drainage ditches and worsen fires, Science reported. For organisms that only live for a year, tumbleweeds sure pack a lot in. “They’re kind of an amazing plant,” Welles says. “Even though they’re awful.”

This ‘Cryptically Carnivorous’ Plant Has Been Hiding in Plain Sight, Waiting for Flesh

The western false asphodel has an appetite for insects, but it’s not a great time to be a meat-eating plant.
science

Deep in a Jamaican cave, scientists are getting to the bottom of that question.
Video • AO Docs

6:55
Want to see fewer ads? Become a Member.
From Around the Web
Travel With Atlas Obscura
Are you a curious traveler?
Join local experts in 50+ destinations for a once-in-a-lifetime journey.
View Our Trips
Thanks for sharing!