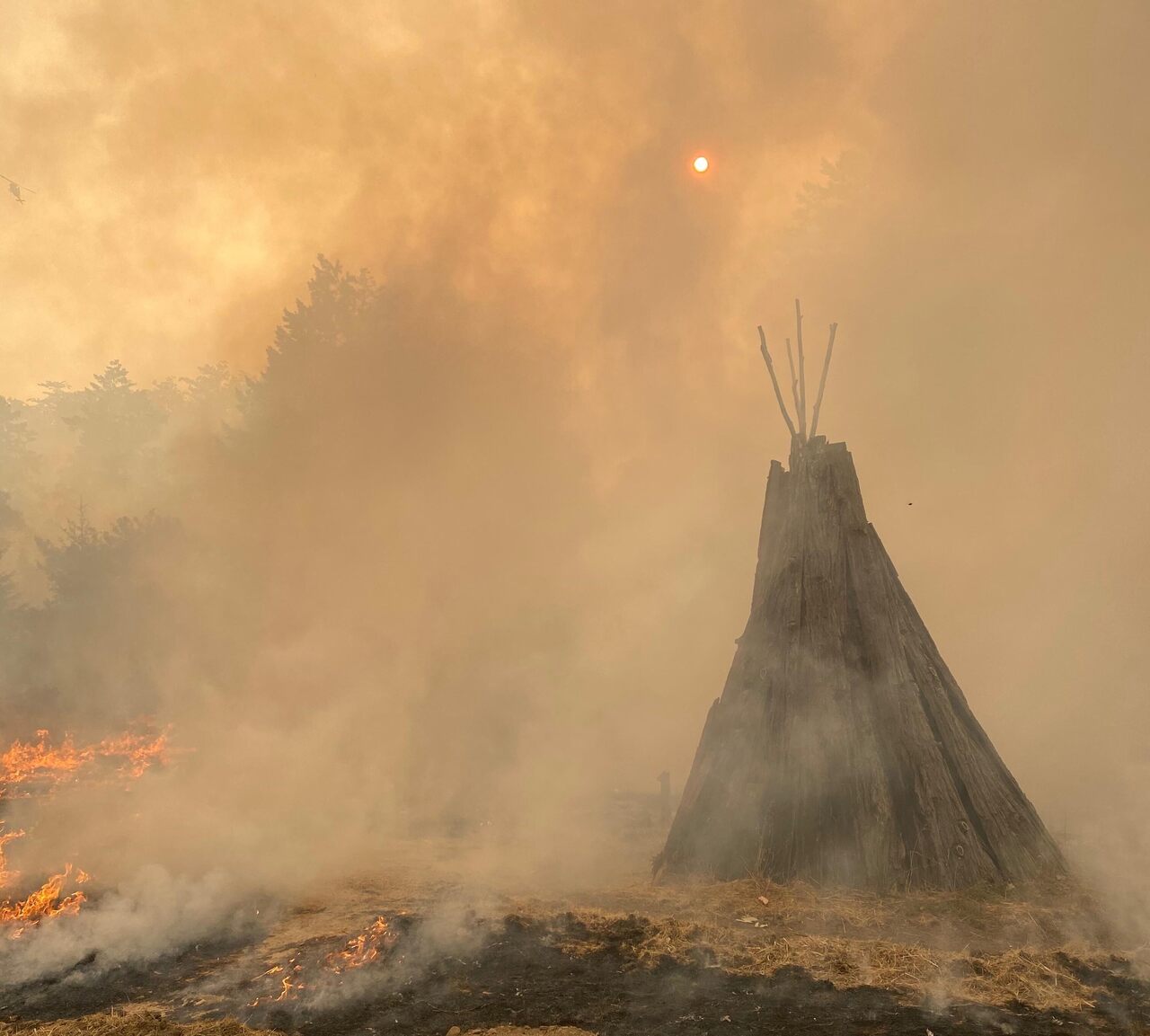 There's smoke, but no wildfire. Public Domain
In This Story
Destination Guide

The ground was orange, and the sky was, too. Flame licked through the grass; the little fist of the sun, a gray cloud, and a jagged top of an evergreen were just barely visible through the smoke. The sloped sides of kotcas—triangular dwellings sometimes made of redwood—were visible in silhouette.

These structures are part of Kule Loklo, a recreated Coast Miwok village that sits inside the Point Reyes National Seashore. Since a lightning strike on August 18, the Woodward Fire has burned its way through portions of Point Reyes, about 30 miles north of San Francisco on the California coast. (As of September 4, the fire has covered 4,704 acres and is 71 percent contained.) But these particular flames weren’t part of the wildfire: They were a controlled burn meant to stave off damage from it.

The exhibit went up several decades ago, a collaboration between the National Park Service, the Miwok Archeological Preserve of Marin, and volunteers, says Carlo Arreglo, a park ranger at Port Reyes National Seashore who leads volunteer work days and education programs at Kule Loklo. No village is known to have stood here, but the site had “everything that an exhibit of a village would need,” Arreglo says. “Space, trees, and access to water.” It’s flanked by a rolling meadow and oak trees, and the reconstructed village wouldn’t muddle the archaeological record for future researchers.

Though the village only dates back to the late 20th-century, it is considered an important cultural resource in the park. Over the years, it has contained a recreated sweathouse and a roundhouse made with such materials as redwood, Douglas fir, and willow, in addition to the recreated dwellings. “Many visitors don’t really realize that the Coast Miwok have been stewards of the North Bay for thousands of years and that they are still an important part of the community,” says Arreglo. Today, some of their descendants are members of the nationally recognized Federated Indians of Graton Rancheria, and sometimes participate in public events at Kule Loklo. They also permit other Native communities to use the site for dances.

These types of careful fires are meant to burn any fuels—grasses, shrubs, anything that could go up in flames—in a slow, deliberate way, before a wildfire comes barreling through. The practice, known as a “backfire” or a “burn out,” ensured that “the firefighters were managing the fire on their own terms,” says Arreglo. (He normally lives in the park, but was evacuated to a hotel along with his family.) Firefighters hand-ignited grasses, he goes on, reducing them from several feet high to just a few inches. Those singed, stubby blades don’t leave much fuel for a bigger, less-wrangled blaze. The preemptive flames stopped at what is known as a handline—swaths cleared of everything but bare soil, to prevent fire from passing through. The whole practice “is a very common suppression strategy to prevent wildfire from burning protected resources, like cultural structures such as these,” says Mike Granger, an operations section chief on one of the Woodward Fire’s Northern Rockies Incident Management Teams. Water was on hand in case crews needed to douse the landscape; the stands and thickets of native grasses and scrub will return after ample rain.

Across the country and the world, as waters rise and fearsome fires become more frequent, communities and cultural resource managers must determine how to safeguard historic structures and interpretive centers. Sometimes, this looks like outrunning erosion by hauling lighthouses and other coastal structures inland, and farther from encroaching water. With archaeological sites or recreated communities, that becomes tricky—and in fire zones, doubly so.

“The majority of cultural resources the park manages are non-portable and their specific location is a critical aspect of their significance,” Arreglo says. “So, relocation is typically viewed as a last resort.” Any hypothetical discussion about moving Kule Loklo would need to be a collaboration between the National Park Service and the Native community—and even if it did appeal, it might be hard to find a suitable new home. “Where would you locate it?” asks Greg Sarris, chairman of the Federated Indians of Graton Rancheria. “That becomes a funny question. Where in our aboriginal territory is fire not an issue?”

Sarris says that if a fire threatened a cultural resource on land within the tribe’s jurisdiction, he would prioritize human safety over preserving it. “You can’t go out there and say, ‘I’m not going to let these firefighters tear up this ground because they’re going to wreck our sacred grounds,’ and then let the fire get out of control,” Sarris says. “If it comes to saving lives or buildings or structures and we have something in the way, we’re not going to say, ‘Stop fighting a fire.’ We’re all in this together.” But in the event of a fire, he goes on, “we would hope if there were time and the chain of command were followed, the park could notify us that we had artifacts or sacred places in danger and would consult with us about what we could do.”

Beyond thinking about how to save specific sites, Sarris believes people should be asking how to leverage traditional ecological knowledge to combat fires. “Let’s clear out the brush, let’s trim the trees, let’s start doing controlled burning,” he says. “The real question here going forward is, ‘How are we going to be stewards of the land?’”

“Tribes have local, place-based cultures and their cultural survival depends on the land."
fires

A state-spanning network of volunteers powers the program.
beer

Many associate beer and spirits with disease and colonialism.
Video • PinDrop

Archaeologists in New Mexico are studying past wildfires through tree rings and pottery sherds.
Read more
Thanks for sharing!