Meet Florida's Most Adorable Rodent and the Superfans Determined to Save It - Atlas Obscura
Want to see fewer ads? Become a Member. 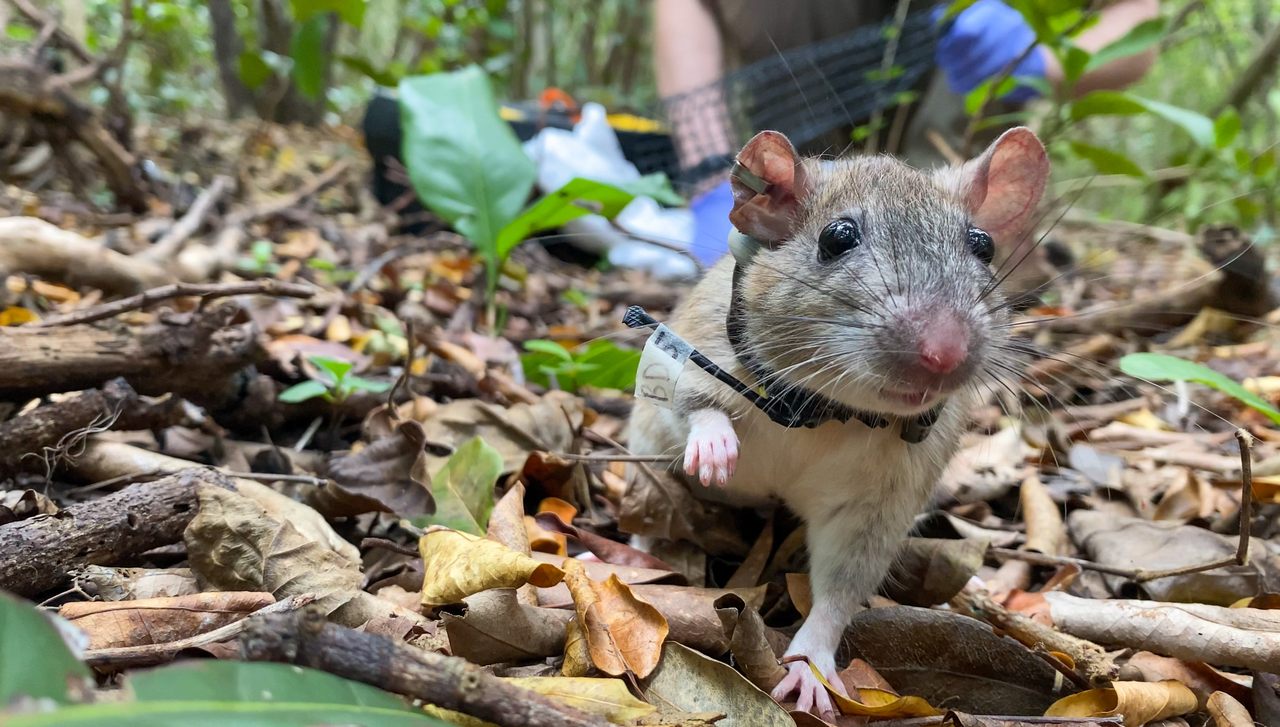 The Key Largo woodrat, which lives only on the northern tip of its namesake Florida island, is one of the world's rarest—and most adorable—rodents. Mike Cove
In This Story
Destination Guide

Wildlife biologist Mike Cove envisioned a romantic career studying big cats in exotic locations. He ended up championing a rat. But not just any rat: one that engineers an entire ecosystem, builds elaborate, six-foot-tall nests in the thick forests of the Florida Keys, and is the leading character in an ongoing drama full of unexpected dangers and bittersweet triumphs, with an unlikely supporting cast of retirees gone rogue.

Diligent groomers with large eyes, sweeping whiskers, and adorably furry tails, Key Largo woodrats are one of the rarest and most endangered rodents in the world, thanks to habitat loss, invasive predators, and climate change. They are also, Cove says, tragically misunderstood.

“Whenever I tell someone I study woodrats, all they hear is the rat part,” says Cove. “But woodrats are so distantly related to black rats it’s like calling a tiger a hyena. We should have named them giant wood mice. People could get behind a giant mouse.”

At about a foot long, including their tails, Key Largo woodrats (Neotoma floridana smalli) are more than twice the length of your average field mouse, with a whopping 10 times the mass. Their nests are also supersized: They collect thousands of sticks to create structures that can stand six feet tall and four feet wide. These massive homes even have their own interior design, with separate chambers for nurseries, latrines, and seed caches.

The nests create insulated microclimate habitats for insects, lizards, amphibians, and many other species which live in and around the structures—and provide a ready source of food for birds, native snakes, and other predators. When the nests eventually break down, they nourish the forest floor like a giant compost pile. During a decade of studying the woodrats, Cove has shown this cycle makes them a keystone species, integral for the health of the entire ecosystem.

His research has also found some potential implications for human health: A dozen new species of bacteria, discovered after Cove swabbed the inside of a woodrat nest, may prove useful for developing new antibiotics. “So much of what we talk about in conservation is like, we should save the Amazon because the next cure for cancer is hidden there in some species of plant,” Cove says. “But here is something like that in Key Largo.”

Key Largo woodrats are found only on the northern tip of their namesake island, the northernmost in the Florida Keys archipelago. Their territory of about four square miles falls mostly within the Crocodile Lake National Wildlife Refuge. More than a century ago, woodrat stick nests were a dominant feature throughout the area, but much of the habitat was cleared out for pineapple plantations, and later residential and commercial development. Despite gaining protection as an endangered species in 1984, woodrat numbers continued to fall. By 2004, there were only 100 or so left, and not a single stick nest to be found.

That same year, retiree and Key Largo resident Ralph DeGayner and his brother Clay found their calling through a most unexpected series of events. A comment made by the refuge manager at the time led to the brothers setting out in search of the rare rodent.

“The refuge manager told Ralph that he would never see a woodrat,” says Jackie DeGayner, Ralph’s wife. “Boy, was he wrong.”

The brothers’ initial forays into the forest came up empty. But as they learned the landscape, they began noticing meager stick nests under discarded boats, old cars, and other garbage. The junk seemed to be encouraging nesting, so the brothers dragged in more of it, including gutted jet skis. Eventually, they refined their technique, installing plastic culverts covered with chunks of limestone, all on their own. Over time they would build more than 1,000 of these supplemental nests.

The DeGayners’ efforts captured the attention of zoologists at Disney’s Animal Kingdom theme park, who established a captive breeding program, hoping to stabilize the population. Alas, there was no fairytale ending. Of the 40 captive-bred rats released into the wild, at least 33 of them died. The brothers found dozens of tracking collars buried with entrails, which, if nothing else, solved the mystery of what was pushing them to extinction: feral cats. Bobcats, native to the area, haven’t been seen on Key Largo since the 1990s. In their absence, the feral cat population had exploded.

So Clay and Ralph DeGayner started trapping cats, sometimes dozens in a single month, and taking them to shelters. The brothers’ pleas for government support of a broader program went unanswered. The Croc Lake refuge itself was not a high priority for Washington, so when the former manager retired, the position went unfilled for years. The brothers continued their woodrat crusade—Cove says that, by the time he showed up in 2012, they were unofficially running the show.

“They were basically rogue volunteers that had keys to the office and were trapping cats and building nests,” says Cove. “I think the folks with the U.S. Fish and Wildlife Service were nervous. They were like, this is insane, someone should go up there and tell them to stop.”

That someone turned out to be Cove, who was sent to Croc Lake “to see if it was good or bad that these two retired hot tub salesmen from Flint, Michigan, were out putting junk in the forest.” Cove quickly discovered that what the DeGayners were doing was good. Really good.

“Because of their efforts, the Key Largo woodrat is still around for future generations to learn about and enjoy,” says current Croc Lake manager Jeremy Dixon who, like Cove, has great affection and admiration for the determined brothers.

Cove’s research backed up the brothers’ observations that feral cats were posing the most immediate threat to the woodrats. His work also showed that woodrats had stopped building their palatial nests because dragging the heavy sticks through the forest was like a dinner bell to the cats. With that data, USFWS supported a management plan that involved trapping hundreds of free-roaming cats. The animals were taken to shelters to be returned to their owners, adopted out, or, if medically necessary, euthanized. The logical, reasonable approach sparked a public outcry.

“They received more comments than about reintroducing wolves to Yellowstone,” says Cove. “Everyone was freaking out. People just lost it.”

The DeGayners and other volunteers were even threatened by angry citizens. “We were accused of killing Fluffy, which we didn’t,” says Clay DeGayner. “Cat lovers are emotional and don’t understand how miserable a feral cat’s existence can be. It’s very difficult to educate them, too.”

The effort to win people over continues today, mostly through a concerted outreach effort by Dixon. The refuge is now working somewhat amicably with cat supporters, including the Ocean Reef Club, a swanky gated community that borders the refuge.

Ocean Reef now runs Florida’s largest trap-neuter-release cat colony, and also maintains more than 50 feeding stations; they microchip every cat and sequester problem wanderers in a permanent enclosure (think giant catio). But hundreds of cats still hunt in the forest, and science has shown that feeding them doesn’t reduce their appetite for killing wildlife. The high public profile of the resort’s colony has also led to irresponsible pet owners dumping their cats in the area, adding to the problem.

Still, even a small reduction in the cat population helped the woodrats. They began piling thousands of sticks on top of the supplemental nests, and even started building their own from scratch. Wild bird populations, including owls, also increased as the ecosystem came into balance. The DeGayner brothers savored the delight of finding nursing woodrat mothers in the nests they helped create. “They are pretty cute and gerbil-like,” says Clay DeGayner. “It is easy to get attached.”

The woodrats’ comeback even attracted the interest of conservation icon Jane Goodall, who spent a morning with the brothers, highlighting their tireless efforts and apparent success. “Key Largo was Woodrat Town again,” says Clay. “At least for a few years.”

By the time Cove published a paper in the journal Biological Conservation in 2019 about their recovery, the victory was already bittersweet. Invasive pythons, which had established a breeding population in the Everglades and were spreading south, had reached the Keys. The snakes had already eaten 99 percent of small mammals in the Everglades, including raccoons and opossums. The Key Largo woodrat didn’t stand a chance.

When asked about the stat that one-third of necropsied pythons in Key Largo now contain woodrats in their stomach contents, all the perpetually upbeat Cove can muster is, “Yeah, that’s a downer. That’s one that’s hard to…” He pauses with emotion, looking for the words. “Yeah, it’s the trend.”

Key Largo now has teams of volunteers and a specially trained dog searching for pythons—in addition to the woodrat, the endangered Key Largo cotton mouse and other small mammals are at risk. Pile on the sea level rise and hurricane intensification that climate change brings and the long-term survival of the Key Largo woodrat looks bleak. But Dixon remains hopeful, and is already working on ways to improve predator management and give Key Largo woodrats a fighting chance. “It will be challenging though,” he says. “The time to act decisively is now.”

Biruté Mary Galdikas has quietly fought on the frontlines of some of conservation’s biggest battles.
Video • Object of Intrigue