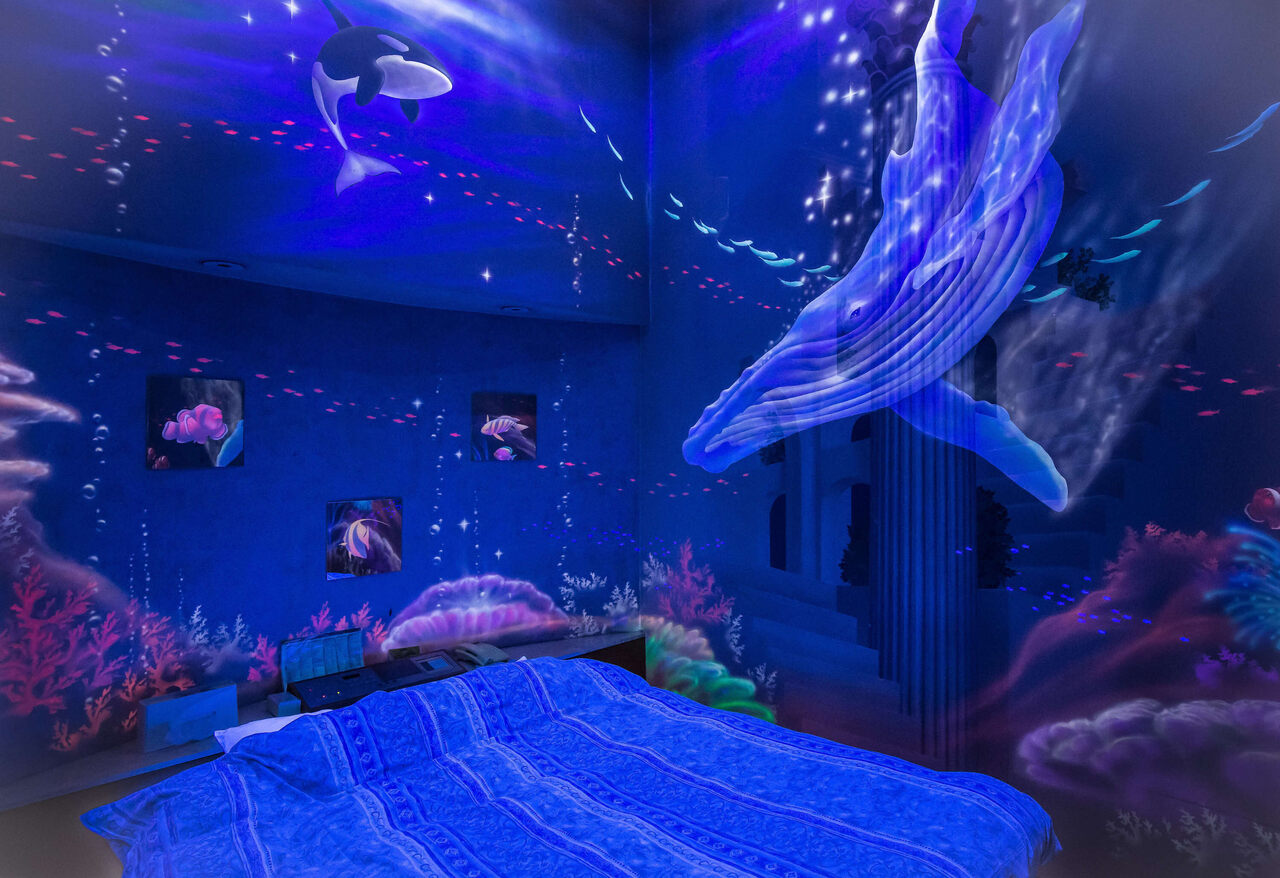 This room in a love hotel incorporates an underwater scene. Others have themes including the White House, doctor's offices, and railway cars. Photo by John Lander / LightRocket via Getty Images
In This Story
Destination Guide

On the seventh story of a Japanese tower block, an uncomfortable negotiation is underway. Behind a check-in desk, a hand extends through a heavy felt curtain and feels around for a credit card on the counter. Finding nothing, it quickly withdraws, and after a hidden, whispered kerfuffle, a receptionist emerges awkwardly into the windowless lobby.

This is a love hotel, a kind of Japanese institution that rents out rooms by the hour to couples who want to be intimate somewhere other than home. Love hotels promise absolute discretion and aim to eliminate face-to-face contact with receptionists. Traditionally guests are locked in their rooms for the duration of their stay and interact with staff only by a screen or telephone. But the international backpackers sweating at this particular check-in desk want to speak to someone in person. They look confused and irritable, no doubt having struggled to find the property’s concealed entrance, and perhaps put off by the dirty, tiled corridors leading in from the parking structure.

Behind them, a young Japanese couple quietly checks in without making eye contact, choosing a theme for their room on an automated screen. In recent years, love hotels have become places where cultures collide. While locals continue to visit them as they always have, international travelers are also booking them online without knowing quite what to expect.

Shishido-san, who runs a love hotel in northern Japan, explains that anonymity is crucial to the concept. “Japanese culture is a culture based on ‘shame’ and love hotels can be used with discretion and secrecy,” he explains in an email. “Japanese people tend to not be very publicly open about sex, so love hotels are necessary as a space to free their sexual desires.”

Love hotels boomed starting around the 1980s. There were an estimated 30,000 in the 2000s, their heyday. But around the turn of the millennium, love hotels started to decline, and have fallen on increasingly hard times. Japan’s population is aging, which means fewer young people who might want to visit love hotels.

Meanwhile, love hotels face political pressure to convert into tourist accommodations. The Tokyo Olympics—originally scheduled for 2020, but now postponed until next year—were the most recent justification for these efforts.

The global pandemic all but eradicated international travel in 2020. Japan closed its borders to most countries and suffered a staggering 99 percent drop in foreign visitors since April. Tourists may gradually return late this year, or in early 2021. And in an era of social distancing, the love hotel model could be unexpectedly well-suited to health-conscious travelers.

Three years ago, the Dutch hotel site booking.com partnered with 349 of Japan’s several thousand love hotels in a bid to offer a quirky Japanese experience to adventurous tourists. Love hotels offer “an experience for tourists who maybe want something a little bit different,” explains Jess Hallams, a tour development director at a Japan-based travel agency. She says her company’s partnership with love hotels has received a lot of attention online. “Japanese culture tends to be very reserved and polite, and this is a way to experience something else.”

Liam, a traveler from London who asked to be identified by a pseudonym, stayed at an inexpensive love hotel in Osaka in February. “Someone told me that it was an essential thing to do in visiting Japan,” he says. The room featured a super-king size bed, karaoke machine, jacuzzi, free condoms, complimentary cosmetics, a sex-toy vending machine, and mood lighting. “The reception seemed surprised that we wanted to speak to a member of staff,” he says.

Initially, the 31-year-old found plenty to do. “We ordered some cosplay and my friend dressed up as a maid and sang karaoke,” he says. “I purchased some panties from the in-room vending machine as a souvenir.” But after a day of sightseeing in the area, the novelty wore off. “The windowlessness of the room got to me. It started to feel kind of stuffy.”

The experiment of bringing love hotels to the foreign masses yielded mixed results before the pandemic, with reviews online ranging from glowing praise of the abundant amenities, decadent and themed rooms, and comparatively low prices, to outright disgust from reviewers scandalized by sex toys on the nightstand and condom dispensers in the alcoves. There were also complaints about shabby decor, cleanliness, and a lack of English-speaking staff.

Some Japanese guests, meanwhile, appeared to be bewildered by the changes made for tourists. One reviewer, who stayed at a love hotel in Osaka, wrote online: “It was really embarrassing to meet another customer at the front desk!”

Indeed, many love hotels have made major changes to the way they operate in order to function more like boutique hotels. Some have done away with a certain amount of discretion in order to offer a conventional check-in experience, and many have suspended the traditional practice of locking couples in their room until they call reception. (This would presumably hinder tourists who want to go sightseeing.)

As one of the best-rated love hotels on sites like booking.com, Hotel Love in Nagoya seems to have adapted particularly well. The manager, Kawashima-san, jokes in an email that the biggest issue was that Western guests would wear shoes in the rooms, damaging the floors. More seriously, he adds, there have been some difficulties with staff who are “unfamiliar” with the expectations of foreigners, and who don’t speak English. But this problem is shared by all types of Japanese hotels, he says. “Most guests leave happy and will return,” he says.

Shishido-san, whose love hotel is in Japan’s northern Sendai city, has also been adapting to the needs of international visitors. He says his staff have embraced the opportunity to learn about different cultures, and visitors gain access to a novel Japanese experience and very “Instagrammable” rooms.

With the arrival of COVID-19, Japanese travelers have returned to love hotels. Early reports suggest that some properties did particularly well amid the pandemic, as people likely used them to escape claustrophobic accommodations or cloying families.

As the country has adjusted to a new normal, domestic hotel bookings have risen to 70 percent of their pre-virus level—although a second wave could push this back down. A spokesman for the Japan National Tourism Organization says hotels across the country have implemented new safety measures, from “QR code menus, plastic screens at welcome desks, temperature checks and increased sanitation,” to holographic “no-touch” touchscreens. Love hotels are well-equipped to enact these new measures.

Liam remembers that back in February, he laughed at the “airlock room service.” Staff left the food, drinks, and costumes he ordered in an adjoining but enclosed entryway, rather than handing them to him directly. “At the time it felt silly,” he says, “but if I went back now, I think I’d feel differently.”

After several months locked down in the U.K., Liam says he’s become very aware of the need to protect himself from the virus, and also to protect restaurant servers, bar staff, and public transportation operators. “No contact can only be a good thing in the era of coronavirus,” he says. “Rather than love hotels becoming more like normal hotels, maybe the pandemic will change the direction of travel—instead, normal hotels will have to change to be like love hotels.”

All you need is a dream, investors with deep pockets, and concrete. A lot of concrete.
abandoned

The organizers posit that "derelict heritage" can be a path to rejuvenation.
shipwrecks

Without jumping in the frigid North Atlantic.
hospitals

When Doctors Thought ‘Wanderlust’ Was a Psychological Condition

For decades, "pathological tourists" ended up in asylums or worse.
Video • Wonder From Home

1:27
Want to see fewer ads? Become a Member.
From Around the Web
Atlas Obscura Trips
Artisans & Exiles: Exploring the Hidden Traditions of Japan’s Sado Island
View This Trip
Thanks for sharing!