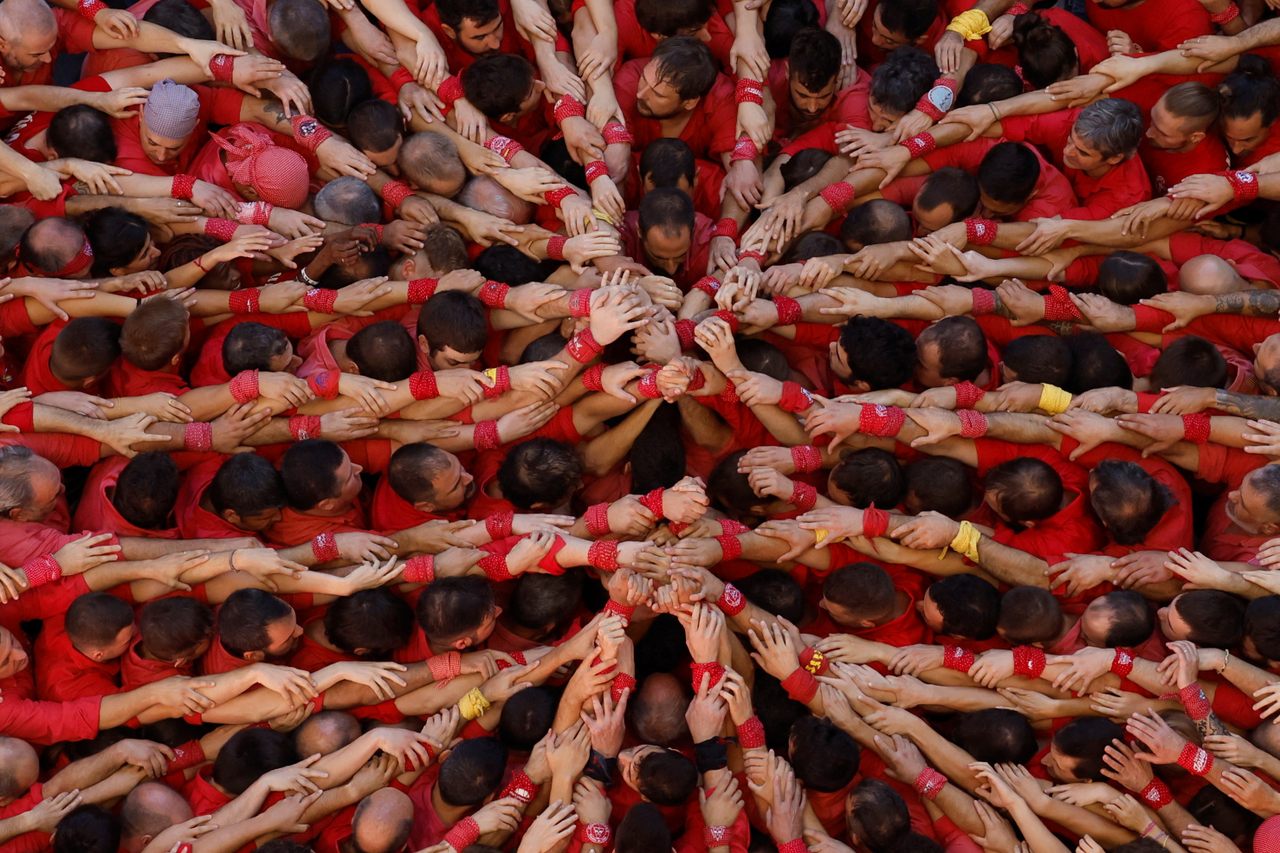 Members of Colla Joves Xiquets De Valls form the pinya, or foundation, of a human tower during a castell-building competition in Tarragona, Spain, earlier this month. Albert Gea/REUTERS
In This Story
Destination Guide

Sometimes, it takes a village to raise a mountain. In Catalonia, no festival is complete without castells, massive towers of humans that can reach jaw-dropping heights—the tallest on record had 10 levels.

Castells go back to the early 18th century, and likely grew out of much older gymnastic and human tower–building traditions throughout Spain, particularly Valencia, to Catalonia’s south. Unlike many of these ancient sports, which have all but disappeared over time, castells have actually been gaining in popularity for the last several decades. About a hundred colles, or teams, are active in the region.

At festivals and regional competitions, these teams battle not only to build the tallest castell, but to then dismantle it in a controlled fashion—without toppling. This human Jenga begins with the pinya. As shown in the image above—taken of the team Colla Joves Xiquets De Valls during a competition earlier this month in Tarragona—the pinya is essentially the strength of dozens of individuals woven together to form a foundation.

Once the pinya is in place, a smaller group of castellers create the tronc, the midsection of the tower, atop it. Additional layers are added, each level standing on the shoulders of the one beneath it. Children or smaller women typically make up the top tiers, or pom de dalt. A single enxaneta climbs to the tippy-top of this human pyramid, signals to the crowd and judges that the castell is complete, and then climbs down. The rest of the formation follows suit—in addition to the number of levels, castells are evaluated by the orderliness of the process, start to finish. Some castells are constructed with modular approach: Upper layers come together on the ground and are then lifted into the air by the next level of castellers forming below it.

Creating a human skyscraper requires precision, and every aspect of castell-building is carefully managed. Each position and level has a specific name, even within the seemingly mob-like pinya. The sashes castellers wear around their waists—used to support the back and also as hand- and footholds for teammates scrambling up or down the tower—vary in width based on the individual’s role. Even the rhythm of the traditional music played during construction serves to synchronize castellers’ movements. As a result of this careful attention to detail, serious injuries and fatalities are surprisingly rare—especially given that the towers are usually built in the middle of unforgiving concrete or brick town squares.

When the human towers of Catalonia were recognized in 2010 by UNESCO as Intangible Cultural Heritage, the organization noted that the knowledge required to create castells is “traditionally passed down from generation to generation.” But, perhaps more accurately, each new generation builds upon the pinya of the one that came before it.

Marbles is a serious game in Overton County, Tennessee.
games

The ancient sport of Pêl-Law hangs on, barely, at the last court of its kind. A campaign to revive a related game may help bring it back.
festivals

In Ghana, the New Year Starts With a Fancy Dress Masquerade

Once a colonial tradition, a creative festival has been elevated to new heights.
culture

“I see the collection as a tool for uncovering what is already there."
Video

12:31
Want to see fewer ads? Become a Member.
From Around the Web
Atlas Obscura Trips
Barcelona & Catalonia: A Feast for the Senses
View This Trip
Thanks for sharing!