The Fight to Resurrect the U.K.'s Underwater Meadows of Seagrass - Atlas Obscura
Want to see fewer ads? Become a Member. 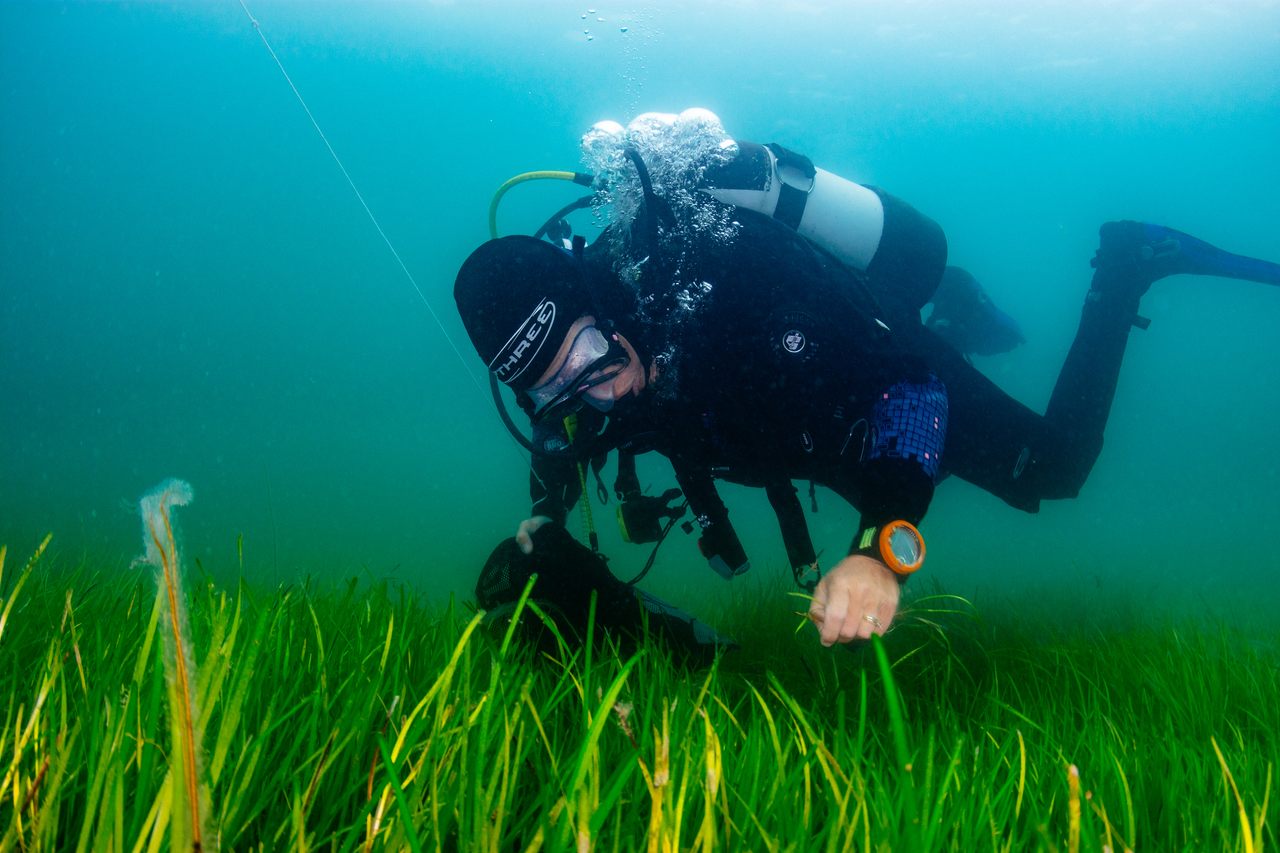 A volunteer scuba diver gathers seeds from the seabed in Porthdinllaen, Wales. Lewis Jefferies / WWF-UK
In This Story
Destination Guide

“We think this whole bay was once carpeted with seagrass,” says Evie Furness, waving across the sparkling, sunlit waters of Dale Bay in Pembrokeshire, Wales.

The underwater meadow is long-gone, though, a victim of past pollution and shipping. So from a boat half a mile from shore, Furness is feeding a long rope into the water, which carries a little hessian bag of seagrass seeds every few feet. “We’ve passed the 800,000-seed mark now,” she says.

The Seagrass Ocean Rescue project will ultimately place more than a dozen miles of rope and a million seeds on the shallow seafloor, where they will sprout through the bags and restore the habitat.

Seagrass meadows were once common around the U.K. coast, but more than 90 percent have been lost as a result of algae-boosting pollution, anchor damage, and port and marina building. The meadows, however, store carbon 35 times the rate of tropical rainforests and harbor up to 40 times as much marine life than seabeds without grass, facts that are driving the effort to bring them back.

“We face a growing climate emergency and a biodiversity emergency, and we have to make rapid steps to fight those,” says Richard Unsworth at Swansea University and lead biologist on the $460,000 project, which is supported by the World Wildlife Fund and Sky Ocean Rescue.

Seagrass covers just 0.2 percent of the ocean, but provides an estimated 10 percent of its carbon storage. It is in trouble around the world, and Unsworth hopes the first project of its kind in the U.K. may help boost take-up of this nature-based solution to the climate crisis.

Seagrass can grow to more than three feet long. Its flowers are pollinated by shrimp and other creatures, as well as water currents. The seeds are like small pine nuts, and many have been placed in their growbags by volunteer schoolchildren. The first green shoots should appear by October.

The huge past losses of seagrass means allowing nature to recolonize the bay in its own time is not an option. “It’s hard for people to understand how screwed the ocean is. It’s out of sight and out of mind,” says Unsworth. “The environment here has got stuck in an anoxic, algae-rich, muddy state. You have to intervene.”

The project is the culmination of eight years of laboratory and sea trials and extensive discussions with the local community. “This is perfect habitat, really sheltered, and it’s all coming together here,” he says.

The seeds were collected over 300 hours of diving at the few remaining seagrass meadows at the Llŷn peninsula in north Wales and on the coasts of Dorset, Devon, and Cornwall. “It’s like underwater blackberry picking,” says Unsworth, describing plucking the “spades” that contain the seeds. The seeds harvested at Llŷn were about 0.05 percent of the total, so the meadow there was not damaged.

Seagrass has a high turnover of leaves, and the dead ones fall into oxygen-poor sediments below, where they trap carbon. The meadows also slow currents, allowing other organic material to drift down and be trapped, potentially for thousands of years.

The meadows are also a rich habitat, providing shelter and food for juvenile cod, plaice, and other species. The 215,000 square feet being restored in Dale Bay could also support cuttlefish, pipefish, and seahorses, and 200 million invertebrates such as the snakelocks anemone, stalked jellyfish, and colorful snails.

Seagrass meadows around the world also provide nurseries for a fifth of the world’s biggest fishing species, including pollock, herring, and whiting, meaning their restoration can improve catches.

Unsworth says the process of gathering seeds and planting them could be made less expensive in future with mechanization. A large restoration project in Chesapeake Bay in the U.S. used underwater equipment akin to combine harvesters to collect seeds, and where the currents were favorable, they were able to simply scatter the seeds.

U.K. waters are cleaner now following European Union water directives in recent decades, Unsworth says: “We want thousands of hectares of seagrass restored and the opportunity exists in this country now. The Stour, Orwell, and Humber estuaries, for example. These places are ripe for it.” Next in the team’s sights are locations in North Wales, if funding can be obtained.

“Seagrass can store about half a [metric] ton of carbon per hectare per year, and more when it is mature,” he says. “It could be part of nature-based solutions [to climate change], and a significant part of it.”

Alec Taylor, WWF’s head of marine policy, says: “Seagrass restoration ticks so many boxes: climate, fisheries, water quality, biodiversity. But we will only get the benefits if we act now and at scale.”

One government action would be to make it easier to get permits for restoration. “Officials say it’s a wonderful idea, but when you apply for licensing you are treated as the criminal until you are proven innocent,” says Unsworth. “It’s almost like we are a problem, rather than a solution.”

Looking across Dale Bay, Unsworth concludes: “As a scientist, and as a father, I could spend the next 20 years writing awesome academic papers about seagrass decline, or spend the 20 years doing something about it. We have a responsibility as scientists to act, as well as report.”

The Scotty Creek facility was part of an unprecedented First Nations effort to study and save the Arctic. Then the fire came.
floods

The coastal community of Selsey welcomes the return of salt marshes where farms once stood.
science