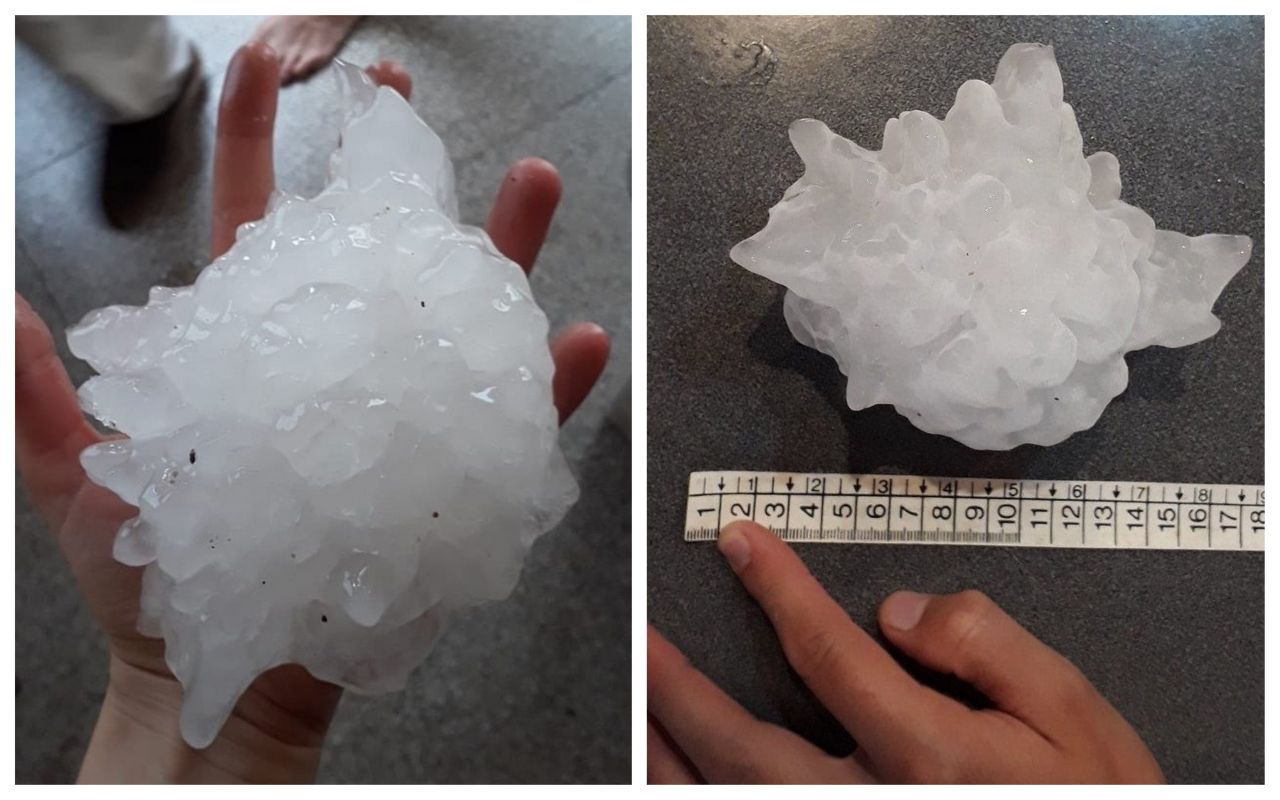 In February 2018, a storm pelted the Argentinian city of Villa Carlos Paz with hail. The icy balls were really, really big—sometimes bigger than a grown-up’s palm, bumpy as a rock, and hefty enough to imperil people and property. The largest of these might even best the biggest on record: an icy behemoth that tumbled down in Vivian, South Dakota, in June 2010, spanning eight inches and weighing more than a pound. In a new paper in the Bulletin of the American Meteorological Society, an international team of 10 researchers argues that some of the Argentinian hailstones were so off-the-charts humongous that they might need new, oversized terminology. A local teenager, Victoria Druetta, put on a motorcycle helmet to protect her head, retrieved a seven-inch specimen from her yard, measured it, and stored it in her family’s freezer. Another hailstone disappeared before researchers could measure it directly, but video footage helped them estimate its size at between 7.4 and 9.3 inches wide.

Hailstones are balls (or spikes, or flattish pancakes) of frozen precipitation that measure at least 0.2 inches across, according to the National Oceanic and Atmospheric Administration’s Severe Storms Laboratory. Several other types of smaller frozen precipitation are known as “ice pellets,” reports the National Snow & Ice Data Center, and may take the form of graupel (soft balls of water droplets clinging to a snow crystal and looking like Styrofoam) or sleet (essentially icy raindrops). In the sky, either of these can serve as an “embryo,” the little nucleus around which a hailstone can grow. The longer a fledgling hailstone stays lofted in a thunderstorm’s fierce updraft, the bigger it gets. Beyond that minimum 0.2-inch threshold, there are a few finer distinctions between hailstones, thrown around by researchers and sometimes forecasters at the National Weather Service. “Severe” hail has a maximum dimension of one inch or more, “significantly severe” stones are larger than two inches, and “giant” hail is bigger than four inches.

“Giant” sounds pretty big, but this crop of researchers didn’t think it seemed quite big enough. A hailstone of more than four inches is “certainly very large,” says Matthew Kumjian, a meteorologist at Penn State University and lead author of the paper. But, he adds, while stones of that size are rare, “they are not exceptional.” Hailstones bigger than four inches are reported 30 to 40 times a year in the United States alone, he says. Stones larger than six inches, though, are few and far between. Kumjian’s co-author, graduate student Rachel Gutierrez, combed through reports and found about 10 confirmed instances in the last 10 or 15 years, mostly in the U.S. (There were a handful of unconfirmed reports in Australia, Africa, and Asia, but photos or official measurements were missing.)

The researchers suspect that there are probably more of these spectacularly sized hailstones dropping down across the country, but they’re likely going unnoticed. When measuring hail, time is of the essence: Hailstones vanish fairly quickly, especially in hot or humid conditions, or if they shatter on impact; even large ones with cushioned falls might be overlooked. The most severe hailstorms in the United States are in the Great Plains, Kumjian says, where people are spread fairly far apart. To find a large hailstone, “you have to be in the right place at the right time,” he says. “Or the wrong place at the wrong time, depending on your perspective.”

In the 1970s and 80s, some researchers drove armored vehicles straight through storms, collected the hailstones in nets, and stashed them in freezers, Kumjian says. Contemporary researchers might pilot drones to after a storm to take aerial surveys of whatever plummeted from the sky. To measure hailstones’ size and mass, researchers typically just scoop them up by hand; if they want to hold on to them for further calculations, they may double-bag the hailstones in freezer bags, to decrease the chance of sublimation, or make a 3D laser scan. (It helps to coat the hailstone with a generous spritz of computer duster spray, an athlete’s foot remedy, or other aerosolized powder coating, to stall melt and help the machine read the bumps and grooves.) Kumjian has several replicas on his desk, and they’ll never turn into puddles.

Kumjian and his collaborators wanted a name to toast what he calls “extreme hailstones,” those rare ones that exceed six inches. Before deciding on a moniker for this most metal type of precipitation, the researchers noodled over a couple of options. “‘Gigantic’ was one of the considerations, but its dictionary definition was too similar to ‘giant,’” Kumjian says. (Gigantic means “exceeding the usual or expected,” while giant means “having an extremely large size, proportion, or power.”) “Ultragiant” seemed a little too clunky. The team settled on “gargantuan,” meaning “tremendous in size, volume, or degree.” It had gravitas—much like the hailstones themselves.

Kumjian doesn’t expect weather forecasters to start raising the alarm about “gargantuan” hail: Even when a supercell storm is on the horizon, rushing in with perfect conditions for hail, it’s hard to predict whether it will produce enormous pieces, or just tons of little ones. But he hopes the name will be accepted by other members of the research community—and that it will be sticky enough to lodge itself in people’s brains, and inspire the public to report specimens of gargantuan hail. If you do spot one, give a meteorologist a heads-up. That would be truly tremendous.

Why Is This Rippling Alaska Glacier a Research Hotbed?

Malaspina Glacier is the world's most accessible of its kind—but that's not the only reason scientists find it so cool.
science

“We want to continue triggering lightning. We’re in no way done with that.”
Video • PinDrop