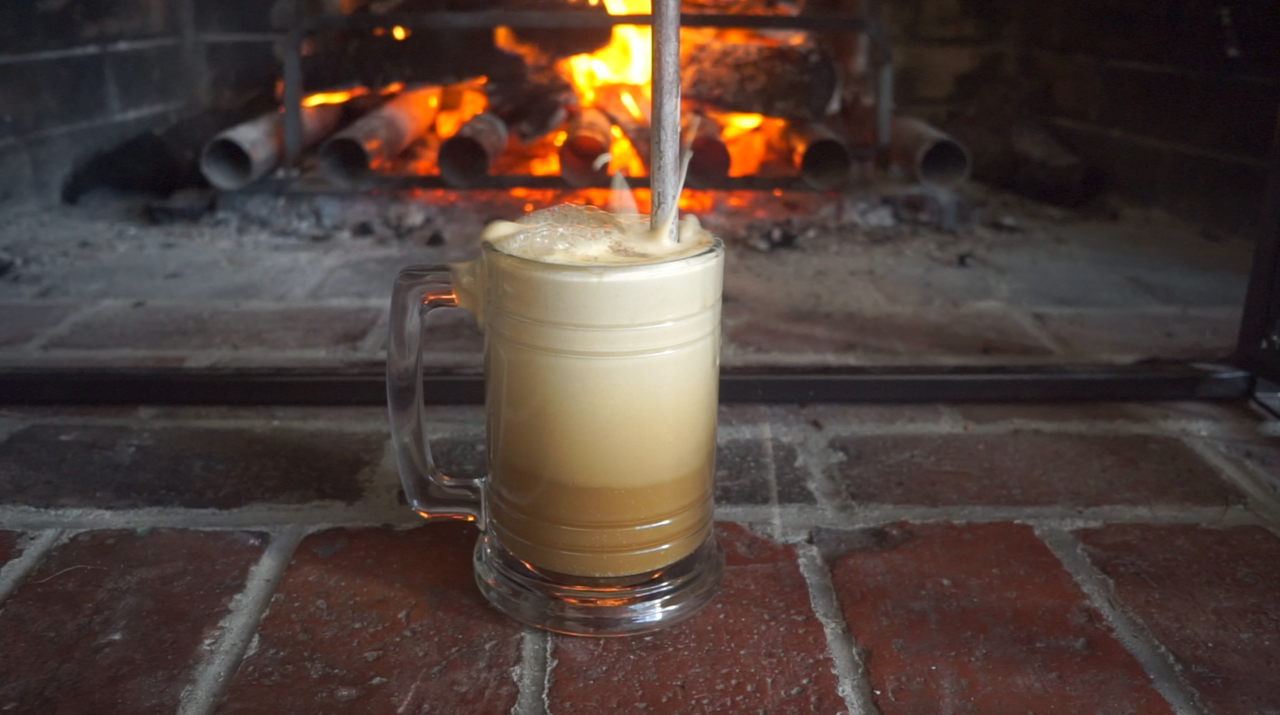 A touch of fire helped colonial Americans through many winters. LUKE FATER FOR GASTRO OBSCURA

“Europeans looked down their noses at post-colonial Americans for just about everything—our fashion sucked, our music sucked, and our paintings sucked,” says culinary historian Sarah Lohman. “So, we really didn’t give a shit if they thought we were drinking swill, too.” Indeed, many early American beverages boasted all the refinement of enterprising yet unsupervised children, perhaps none more so than the Hot Ale Flip, a tavern favorite of the 1700s. The recipe called for frothing rum-laced dark ale with egg and spices before torching everything into a creamy, bubbling frenzy with the help of a red-hot fire poker.

The Flip, as it was known colloquially, had roots in England, where it was widely besmirched as a “sailor’s drink.” In the rugged world of the early colonies, however, where class distinctions blurred, the Flip’s stigma evaporated as well: Everyone needed a drink now and then, and the Flip made great use of available resources. To survive a trans-Atlantic voyage in the 1600s, you had to be a bit of a sailor anyway; a little ash in your drink wouldn’t kill you.

According to Corin Hirsch, author of Forgotten Drinks of Colonial New England, the Flip was ubiquitous across the colonies by the mid-1700s. It was served far and wide, from high-society locales like New York City’s famed Fraunces Tavern (patronized by George Washington himself) to the lowly dives of Boston, where Flip-fueled bar brawls led to murder-by-fire-poker in at least one instance.

If Europeans looked down on the early United States, practices like the Ale Flip show a culture embracing its rough-around-the-edges identity. Thrusting a fire tool into an odd melange of boozy ingredients speaks to a scrappy resourcefulness, but, according to Lohman, a sort of indifferent ruggedness as well. “There was no accounting for taste, we just wanted something warm with calories in it,” she says. “And we didn’t care that Europe thought we were backwater—we were into that image.” She points to an 1842 Manhattan banquet held for a visiting British author named Charles Dickens, at which he and 3,000 of the day’s urbanites were served Roasted Bear.

“We weren’t even eating a ton of bear in America at the time,” says Lohman. “We just loved that wildness.”

To be sure, New York City produced something of the world’s first celebrity bartender, Orsamus Willard, whose name was known by every American in 1839 for his summertime Mint Juleps and wintertime Apple Toddies. In 1862, another New York bartender, “Professor” Jerry Thomas, produced what is widely considered the first cocktail book, a collection of previously orally passed recipes that is still referred to by modern bartenders. In the mid-1800s, “Europeans would come over and sneer at American culture,” says Lohman, “but this was the one thing they would grant us as a beautiful artform that we introduced to the world—cocktails.” Sure enough, travelers’ accounts of the 1800s resounded in adoration of early American mixology. “That was the thing you did when you were British and you visited early America,” says Lohman, “you went and had a drink.”

With the antiquation of hearths, the role of the fire-poker in drink-making fell by the wayside, though its presence echoes through every wondrous American cocktail bar—shuttered as they may be during the current pandemic. The Flip walked so the Julep could run; but that’s not to say the Flip can’t still walk. “What’s so funny about colonial-era drinks,” says Hirsch, “is that they sound so crude on paper and yet they can be so good. The fire poker adds this really delicious charred flavor to everything.” She’s careful not to ascribe early drinkers’ motives to taste, however. “Sometimes I wonder if they were just bored, trying to figure out how to make drinking more exciting.”

You can make your own poker-heated Flip at home using the below recipe. It’s a process that Lohman adapted from Paula Marcoux’s Cooking With Fire for her former blog, Four Pounds Flour. We’ve simplified it to suit the resource-strapped quarantine-kitchen. There is fire involved, so a steady hand helps here.

While an open fire may not be an option for everyone, a version for a stovetop Flip adapted from Forgotten Drinks of Colonial New England follows. Drink historically, drink responsibly.

For the drink
1 bottle (12 ounces) brown or amber ale at room temperature and preferably flat (open bottle, can, or growler and let it sit)
1 egg
2–3 tablespoons sugar syrup (above)
1 ounce dark or golden rum
grated nutmeg (to taste)

Combine all the syrup ingredients in a saucepan and bring to a boil without stirring. Remove from heat.

Combine the ale, egg, and syrup in a bowl and whisk until it’s slightly frothy. Add the rum. Transfer to a heat-safe mug or bowl wide enough to accommodate the top of the fire poker.

Heat a fire poker in coals until red-hot. Pull it out of the fire and plunge it into your mug or bowl. Remove it when the bubbling stops. If a little ash gets in there, scoop it out with a spoon. If the drink isn’t warm enough, repeat. Top with a bit of fresh, grated nutmeg.

Use two pint glasses or mugs. Pour the rum and sugar syrup into one, and beat an egg in the other until frothy.

Heat the beer in a saucepan until steaming (but not boiling).

Pour the beer into the glass with the rum and sugar syrup, then quickly pour that mixture into the cup with the egg in it. Mix further by pouring the contents back and forth (ideally over a sink) until they’ve blended into a smooth, creamy drink.

How to Make Ice-Cream Cocktails Like a True Wisconsinite

Turn your home into a supper club with these 6 recipes.
food

How Historical Societies Are Bringing Their Recipes to Pandemic Cooks

Food has become an important tool for connection.
food

This sweet Southern elixir comes from what may be the oldest grape vine in North America.
Sponsored by Johnston County Visitors Bureau
Gastro Obscura

"As a vanquisher of men its equal has never been found."
Want to see fewer ads? Become a Member.
Related

Despite James Hemings’s leading role in Jefferson’s kitchen, he’s credited with only a handful of recipes.
Read more
Thanks for sharing!