How the ‘Fast and Furious’ Set Designers Made SoCal the Focus - Atlas Obscura
Want to see fewer ads? Become a Member. 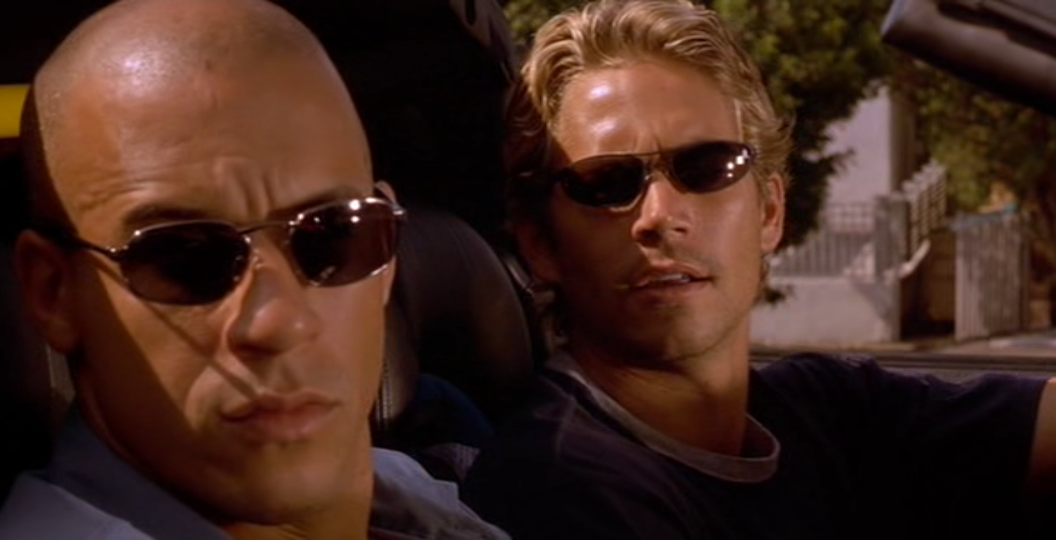 Vin Diesel and Paul Walker in The Fast and the Furious. All Photos: Courtesy Universal

Action films are often described as “rides”, and that description could not be more accurately applied to The Fast and the Furious. From the chrome-plated opening credits to the final vehicular barrel roll, humans take a backseat in this car fetish franchise, which is upfront about what’s on offer. The titles are enough to tell the audience they’re signing on for gleeful mayhem that doesn’t take itself too seriously. After 2001’s inaugural offering followed six more that read like word soup assembled from the first: 2 Fast 2 Furious (2003), The Fast and the Furious Tokyo Drift (2006), Fast & Furious (2009) and so on, right up to 2015’s Furious 7. (A new installment, Fast 8, arrives in 2017.)

The marquee players of The Fast and the Furious are the cars—and for anyone who doubts that, the creators of the film have said as much. As director Rob Cohen told a reporter, “The vehicles are really the co-stars of this movie.” Eddie Paul, who built the vehicles featured in the film, wrote in his book The Cars of the Fast and the Furious of the first and second films, “The cars are the main characters in both of these movies.”

But it’s not just any kind of cars. It’s Southern California car culture that fills the screen.

Can’t miss my room, it’s right past the car.

The human co-stars of the film are Vin Diesel as Dominic Toretto, the street-racing grocery-store owner with a tragic past and Paul Walker as Brian O’Conner the LAPD cop assigned with investigating Toretto’s group (nay, family) of adrenaline junkies in connection with a series of truck hijackings.

The film begins in a car, as O’Conner puts his slime green Mitsubishi Eclipse through its paces in the Dodger Stadium parking lot. Numerous scenes are spent in the cabs of flashy, neon-colored racers, tricked out with computer screens, nitrous oxide tanks, extraneous LED lights and ostentatious artwork. But even when viewers aren’t sitting in the cab or careening along the road with the drivers, it rarely feels like we’ve exited the car. The camera sweeps past rows of car parts to enter the cubby where O’Connor sleeps, surrounded—of course—by car posters. When a rival gang of street racers torment a mechanic, his tools become the weapons as a bad guy jams a pump into his mouth and fills his craw with oil.

In an interview with Cinema.com, costume designer Sanja Milkovic Hays said of the men’s outfits that she wanted them to “look like they just got out of bed and threw some clothes on,” and this is true to a certain extent—Toretto wears a button up with the sleeves ripped off, O’Conner’s typical look is a t-shirt—but there is also something highly calibrated about the men in the film. They are decorated with complicated tattoos, wear chunky necklaces, mesh tank tops and wrist cuffs. The male physique is carefully honed; to see characters with their shirts off is to know time and money has been lavished on their exterior.

They are the sportscars of the human world.

The Fast and the Furious is a snapshot of a certain kind of early ‘00s fashion, particularly when it comes to the outfits Sanja assembled for the women in the film, most of whom are as much set decoration as the cars that crowd the race scenes. (Some of these women are credited simply as “Hot Chick” on the film’s IMDB page.)

“A lot of the girls at these street races are trying to compete with their boyfriends’ cars,” Hays said. “And we have so much male energy in the movie that we needed to balance it. So we had a lot of fun dressing the women outrageously, from jeans to fishnet to leather.”

This is a world where midriffs are never covered, women dress as if they have chosen their daily outfits from a Halloween store, and are provocative in the way fashions that came of age in the 1990s are: There are chunky flip flops, filmy spaghetti strap tank tops and shiny materials galore. The extras were dressed to “match the ‘coolness’ of the car” according to Hays. (The idea of people-as-cars and cars-as-people would be brought to its logical conclusion by Pixar five years later.)

The two women who occasionally wear pants (Michelle Rodriguez as Letty and Jordana Brewster as Mia Toretto) are also the ones who get to drive.

As much as The Fast and the Furious is a love letter to car culture, it is also an ode to Los Angeles, the car-iest place on Earth. But this is not the glitzy Los Angeles of other big-budget films. (Although there, are, of course, sweeping shots of the glittering cityscape from on high—it’s basically illegal to shoot a film in LA without one.) The Fast and the Furious was shot in neighborhoods like Echo Park and Angelino Heights, where the scenery veers toward single-family homes and telephone wires, not high-rises and neon. Toretto runs a modest grocery store (which is actually Bob’s Market in Echo Park). He lives in an unassuming home, the interior of which looks like teenagers inherited their grandmother’s house.

(It is unremarkable save one odd detail—the “family” loves candles. Whether watching television, partying or hanging out in the bedroom, there are enough lit candles strewn about to hold an impromptu black mass.)

The low-key surroundings are great at showing off over-the-top cars, but also mark the racers as down-to-Earth dudes. The only people who populate a stereotypically Hollywood setting? The no-fun cops who have set up shop inside an expansive mid-century home commandeered from the previous occupant.

The glamorous abode taken over by cops.

Watching The Fast and the Furious 15 years after it debuted in theaters, it is striking how reserved the action seems in comparison to what followed. The film is filled with stylish car races and chases, and the action culminates in a centerpiece that required the invention of a special stunt truck dubbed a Mic Rig that allowed a massive flatbed to keep pace with street racers.

But with each installment, the ante was upped. The subsequent films would be marked by global locations, even more outrageous outfits, and of course, more cars. Furious 7 featured—among other breathtakingly improbable escapades—a car smashing through the window of a Abu Dhabi highrise and landing safely in an adjacent skyscraper. The Fast and the Furious has come a long way since Echo Park.

As we enter the final leg of the 2016 presidential campaign, let us examine one of the iconic film portrayals of press and politics.
film

The Secrets of Set Decoration from 'Working Girl'

It's even got a toilet!
objects of intrigue

Object of Intrigue: The Juvenile Oscars