The Famous Fight Over the Turn-of-the-Century Trend of Spirit Photography - Atlas Obscura
Want to see fewer ads? Become a Member. 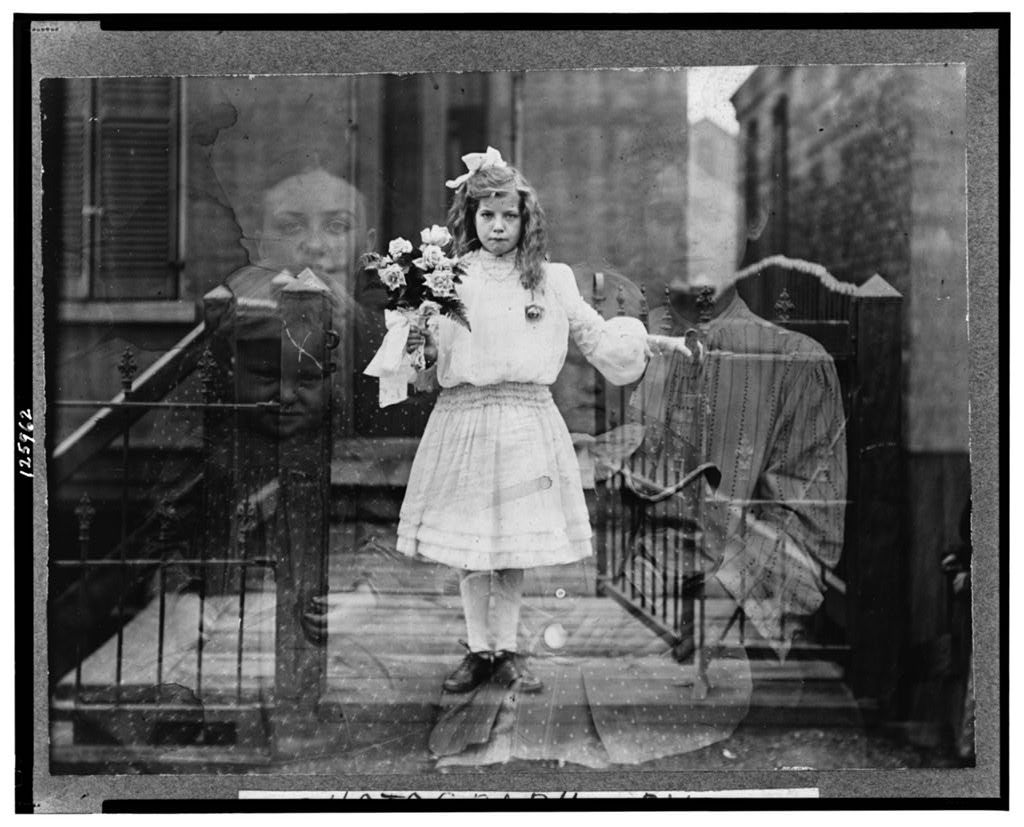 This spirit photograph was taken in Chicago in 1905. G.S. Smallwood, who captured the image, wrote to American Amateur Photographer claiming, "it is honest and no fake, and how I got it God only knows." Library of Congress/LC-USZ62-125962

In 1923 and 1924, Arthur Conan Doyle and Harry Houdini both toured the United States. They both sold out theaters, often in the same city within days of one another, and neither of them was offering crowds what they were most famous for. The author was not there to tell tales of Sherlock Holmes, and the magician did not execute his most daring illusions or escapes. Instead, spectators filled the seats to hear lectures—lectures about communing with the dead.

The religious movement known as Spiritualism, which had started in New York in the 1840s, was based on the belief that the living could communicate with the dead. It had grown in popularity through the decades, and by the 1920s in the United States—where Americans were still reeling from the deaths of nearly 800,000 in the 1918 pandemic and the Great War—Spiritualism had millions of adherents. Doyle and Houdini were presenting starkly opposing views on it and its trappings—mediums, seances, claims that spirits were sending messages through raps and taps, automatic writing, Ouija boards, spirit photography, and other inscrutable, mystical means.

Doyle, a physician and man of science whose famous detective had become an avatar for rational thought, was an ardent believer. “Doyle’s interest in medicine and science drove his interest in Spiritualism,” says Eric Colleary, a curator at the Harry Ransom Center at the University of Texas at Austin, where Doyle’s papers are archived. (The Ransom Center is also home to a collection of Houdini’s papers.) “He genuinely believes that there were energies and aspects of nature that we still didn’t understand. And, of course, that’s science, right?”

Harry Houdini, an entertainer and master of misdirection whose escapes seemed to defy the very laws of nature, was a devoted skeptic. “He was on a 30-year crusade to debunk Spiritualism,” says Amanda Zimmerman, a reference librarian at the Library of Congress, which holds a large collection of Houdini’s books. “He believed it was the responsibility of the magician to make it clear to the public that this was not magic. This was all tricks of the eye. This was misdirection. This was an illusion.”

These stances appear to be at odds with the 21st-century reputation of each of these figures, and despite their vehement, public disagreement over Spiritualism, Doyle and Houdini were friends. That much is clear in their respective archives, which include cordial letters, articles, and books the men exchanged, often in an effort to persuade the other to reconsider his misguided views. But these papers and possessions also show the depth of their divide. Nowhere was this more clear than in their collections of spirit photography.

Both men amassed scores of these haunting images, which appeared to capture on film spirits invisible to the human eye. The ghostly figures—sometimes shrouded, other times clearly recognizable as family members or historical figures—hovered in the background of otherwise mundane portraits or took over images entirely, as if wreaking havoc on the living world. In the 1920s—depending on if you sided with Doyle or with Houdini—these were incontrovertible visual evidence of the spirit world or proof that clever photographic tricks could part the credulous from their money. (The images have since been debunked; most are simply double exposures.)

Among Houdini’s collection of spirit photographs at the Library of Congress is an entirely unexpected image of the illusionist seated alongside Abraham Lincoln. The escape artist is showing the former president something in a book and the two appear to be deep in conversation. Houdini revered Lincoln, and it is easy to believe they would have had much to talk about if, of course, Lincoln hadn’t been assassinated almost a decade before Houdini was born.

Houdini created the image around 1925 to prove that spirit photography was a fraud, says Zimmerman. “This image is a really strange story,” she adds. It was not uncommon for mediums at the time to claim to have seen well-known people, and Lincoln, whose wife, Mary Todd, had hosted seances in the White House, was a favorite apparition. “This really, really angered Houdini,” who, in addition to being a Lincoln fan, was also an acquaintance of Lincoln’s son, Zimmerman says. “In an effort to make sure that Robert Todd wouldn’t be taken in by these dupes, these fraudsters, [Houdini] created his own double-exposure image of himself supposedly conversing with Lincoln and then he sent that photo, along with a very detailed scientific explanation of the double-exposure process to Robert Todd Lincoln, so he would not be taken in by anyone offering him this kind of connection to his murdered dad.”

It is easy to understand the appeal of spirit photography, especially when it involved a loved one. Spiritualism offered solace. “People took peace from it,” Colleary says.

That may explain an equally improbable image of Arthur Conan Doyle in the Harry Ransom Center collection. The author, with his signature white mustache, is pictured with his wife, Jean, and one of his sons in a photograph taken by William Hope in 1931—the year after Doyle’s death. For Jean, who considered herself a medium and once famously claimed to have channeled Houdini’s deceased mother, the image was proof that her husband had a place in the afterlife.

“Even to this day there is still this feeling that photography is an accurate representation of nature, which totally discounts the fact that the camera person is positioning the camera in a specific way and sometimes even posing people, to say nothing of post-photographic editing and manipulation,” says Colleary. “Then the whole concept was so new. Why couldn’t [photography] show psychic energies that are otherwise invisible to the naked eye? Think about X-rays, which were also new. You could see a person’s bones without cutting into them. So, why not spirit photography?”

Both Houdini and Doyle worked hard to promote their beliefs and held fast to them until their deaths—but not beyond them. Their rivaling lecture tours helped to shape public opinion on spirit photography and Spiritualism in general. Houdini’s skepticism was the stronger draw; he was a better entertainer. “He was a true showman to the end,” says Zimmerman; Houdini died on Halloween night 1926. But after the illusionist’s death, Doyle wrote about his friend and foil, claiming that Houdini’s greatest tricks were manifestations of the spirit world.

It's more bizarre than the urban legends.
libraries

Want to Transcribe Rare Magical Manuscripts on Your Lunch Break?

Our contributors share stories from spooky locations they’ve visited and which continue to haunt them.
haunted

Haunted places have a lot to tell us about ourselves.
Video