The Heraldic Rebus, Born in Battle and Embraced by Tudor England, Lives on in Your Smartphone - Atlas Obscura
Want to see fewer ads? Become a Member. 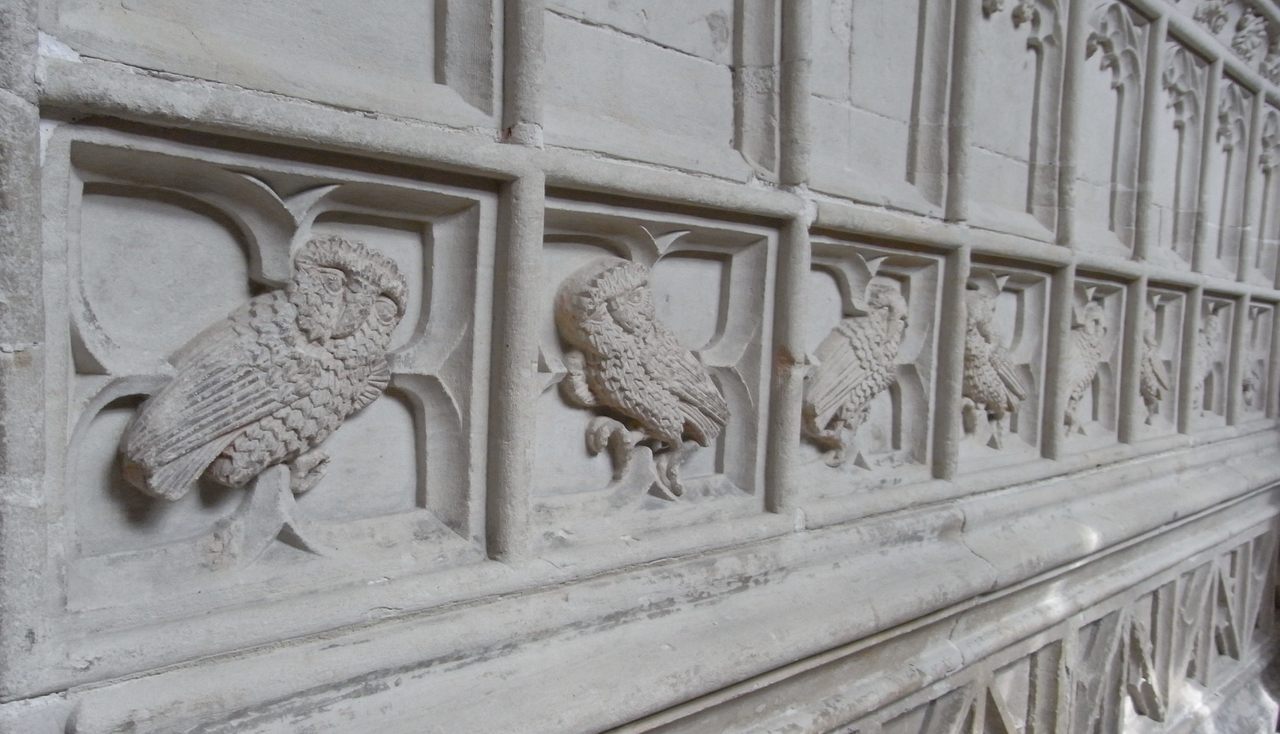 Hugh Oldham's personal rebus included an owl, which became a motif in Exeter Cathedral, where he served as bishop in the 16th century. Lobsterthermidor/Public Domain/Wikimedia
In This Story
Destination Guide

Made of stone and set in a verdant churchyard lined with crooked tombstones, 13th-century St. Mary’s in Lidgate, Suffolk, looks like a typical English village church. But inside, on the church’s northern wall, you’ll find some rather peculiar graffiti. Along with daisy wheels and Solomon’s knots—geometric designs, known as apotropaic markings and intended to keep away evil spirits—there’s a rebus. Derived from the Latin expression non verbis sed rebus, which means “not by words, but with things,” a rebus is a puzzle in which a word, or part of a word, is represented by a picture. This particular rebus was likely carved into the stone by John Lydgate, a monk and prolific poet of the 14th and 15th centuries, who devoted himself to religious study after a decadent youth.

The rebus starts with the word “well,” then the musical notes C, A, B, and E—or “fa-re-mi-la,” as they are sometimes named—followed by the letters “dy.” Next, there’s a pictogram of the side of a die that has four pips, or dots, and was, at the time, called the cater. The rebus ends with the letters “yne.” Taken as a whole, it reads: “Well fare, my lady Catherine.” The puzzle, perhaps not the cleverest of its kind, is thought to be an expression of love from Lydgate to Lady Catherine of Valois, who became Queen of England after marrying King Henry V.

“The information these old rebuses convey was often very personal,” says University of East Anglia’s Matthew Champion, director of the Norfolk Medieval Graffiti Survey. The group is currently cataloging all the medieval graffiti in the county—some of which has yet to be deciphered. There’s a ship carved into the wall of St. Nicholas church in Blakeney, for example, which could be a rebus involving someone whose name sounds like a word in ship terminology. Or it could represent a nickname, or even an inside joke. Rebuses were often so personal, says Champion, that “you had to know, for example, that Lady Genevieve was Lord Thornton’s sister who kept sighthounds and lived on an estate called Foxborough in Dorset to get the pun. Because of this, many of their meanings are lost forever.”

These personal rebuses are also generally rare, and found mostly in churches and around the palatial estates of the upper classes. But their roots go back to the medieval battlefield. “Heraldry evolved in 12th-century Europe, probably in response to the growing difficulty of recognizing men in armor as that armor became larger and heavier,” says Suffolk Heraldry Society Secretary Donald Hunt.

“During the Battle of Hastings in 1066, when a rumor spread that William the Conqueror had been killed, he had only to tilt his helmet back as he rode among them for all to see that he was alive,” Hunt says. “Two hundred years later, such a feat would have required considerable exertion and the help of a squire. Men in armor could by now only distinguish one another by heraldic devices on their shields.” Rebuses, he adds, “were a means to deliver identifying information quickly during battle.”

The use of these heraldic rebuses occurred in much of Western Europe, but the Tudor Period in England—which lasted from 1485 to 1603—was something of a heyday for them. Everyone from book publishers to couriers to village publicans wanted their own clever design.

Today, the Suffolk Heraldry Society organizes street heraldry workshops in which volunteers scour a village or market town for forgotten heralds and rebuses. “The more developed an area, the less you find, as the written word replaces once lively images,” says Hunt. “We pull back ivy, snoop through gates, investigate pub toilet walls. More than once, people have called the police to report us as snoopers.”

Some of personal rebuses are easy to understand: Princess Beatrice of York’s coat of arms features three bees—bees thrice, meant to sound like “Beatrice.” For his rebus, early 16th-century Bishop of Exeter Hugh Oldham adopted an owl with the letters “DOM” on a sash, intending “owl” and “dom” to sound something like his surname.

Others are less obvious: The abbot of Westminster from 1500 to 1532, John Islap’s rebus was a human eye and a tree with the hand of a man falling from said tree. Translated, it reads “I slipped” or said quickly: “Islap.” Several depictions of this rebus are still intact in Westminster Cathedral. Lord Cromwell had Tattershall, his castle in Lincolnshire, outfitted with his heraldic rebus, a design that features a purse—signifying his job as treasurer to Henry VI—and two sprays of gromwell plant, which sounds phonetically similar to his surname.

Places also have identifying rebuses. The village of Old Catton in Norfolk has long used a cat perched on a tun, or barrel cask, as its town symbol. The historic Borough of Congleton in Cheshire has a rebus consisting of a conger eel, a lion (leo in Latin), and a tun. This word sequence “conger-leo-tun” approximates the town’s name—and also demonstrates just how complex rebus reading can be.

“Solving a rebus is often about discovering more about the context of the time. Often the rebus designers wanted them to be clever, to be difficult to solve for those not in the know,” says Matt Propper, the heraldry specialist on the Reading Rebus team, which is based at the City University of New York and maintains an online collection of rebus puzzles.

“We’ve decoded most of the rebuses in our collection, but there are some unsolved,” Propper adds. There’s a dainty 15th-century European signet ring, for example, a favorite mystery of Propper’s that has yet to be cracked. It features what might be a sunflower—which would have been a very recent arrival from the New World—framed by the initials T and S. “Solving rebuses requires an old way of thinking, a sometimes poetic, creative association between sounds and images.”

Heraldic and personal rebuses are still being created today, though their usage is much diminished. One way they are hanging on is in text messaging. North London teenager Isla Burgess, for example, says her friends refer to her by using the emojis for island and then iceberg on text messages. “We all do it,” Burgess says, smartphone in hand. “My friend Oliver is the olive. Martin is the martini glass. It’s much easier to type.”

Rebus, a jewelry company in London, creates and produces custom rebus signet rings. It also runs a hand engraving apprenticeship program and hosts a popular rebus-making workshop, where participants imagine and craft their own personal rebuses. It’s a way of looking back at this earlier form of self-expression and using it in modern ways. “They’re about showing how clever you are,” says engraver Tom Hill, an apprentice designer. “People will see your rebus when you’re gone and remember you… and your wit.”

From the secrets of Venice’s codebreakers to China’s intricately carved puzzle balls, these historical ciphers will inspire your curiosity.
medieval

A crusty, dense bread got the country's hardworking equines through long days.
crime