The Forest That Blooms Brilliantly for Just a Few Days a Year - Atlas Obscura
Want to see fewer ads? Become a Member. 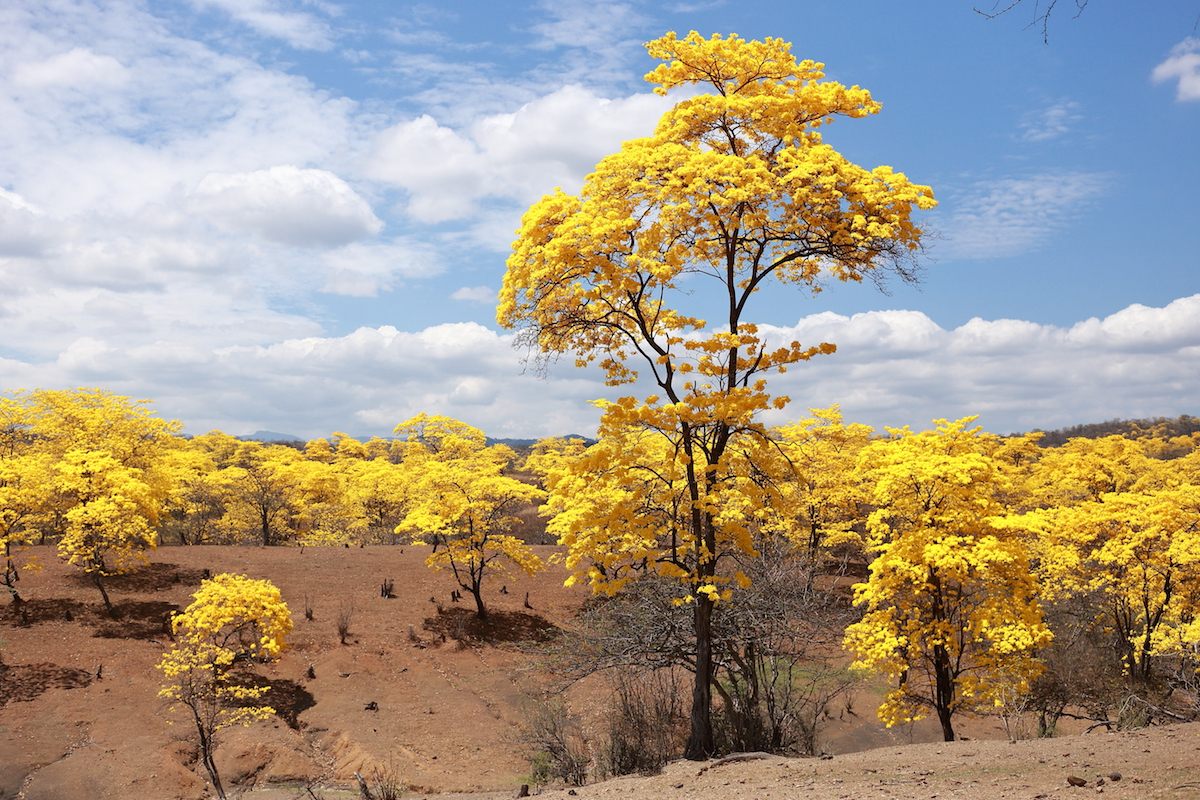 This desert-like landscape is covered with yellow flowers for only a few days a year. All Photos: Nicolas van Drunen
In This Story
Destination Guide

For one week a year, the desert-like forests surrounding Mangahurco are filled with bright yellow flowers. This remote town in the Ecuadorian province of Loja, sitting a stone’s throw from the southern border with Peru, was completely off the tourist map until only a few years ago. Now nearly 10,000 visitors per year visit Mangahurco, where the year-round population lingers at around 600, to witness the flowering of the guayacán trees.

Part of the beauty comes from the strange mix of colors, the vibrancy of the yellow flowers against the dry red soil. But it’s also the sheer scale of the event: There are 40,000 hectares (nearly 100,000 acres) of guayacán forest surrounding the towns of Mangahurco, Bolaspambas, and Cazaderos, and, given weather certain conditions, they can all blossom with near synchronicity, painting the landscape with solid stretches of yellow that extend across the entire valley.

Guayacán is the common name for a number of species of hardwood trees that belong to the Bignoniaceae family. They can grow to heights of up to 20 meters (66 feet) and are best adapted to the hot climate and well-drained soils of the tropical dry forest of Ecuador as well as in parts of Mexico, Panama, Costa Rica, Colombia, and Peru. The Tabebuia chrysantha, also known as Handroanthus chrysanthus,* is found in the north of Peru and in the southwest corner of Loja.

The Tabebuia chrysantha’s short flowering season is part of how it adapts to the dry conditions that it experiences during most of the year. To conserve water, they shed their leaves and stay bare during the dry season. After the first rains, the trees flower and then sprout leaves to replace them until the end of the rainy season.

The extent of the blossoming changes from year to year. If the rains are weak, or if they start and stop, the trees will blossom only a few at a time, some earlier and some later in the season. But if it rains hard, for several days in a row, the entire forest will blossom within the span of three or four days.

Even though you can find guayacán trees throughout the tropical dry forest, the florecimiento in Mangahurco is exceptionally beautiful because the guayacán is the predominant species in this area: Almost all of the trees growing in this part of the forest are Tabebuia chrysantha.

After a few days, the trees reach their maximum flowering point and the blossoms begin to fall to the ground shortly after. The fallen flowers form a yellow carpet around the base of each tree—but many are quickly eaten by the hungry goats that wander around the area grazing.

To outside visitors, the blossoming of the guayacán forest in Mangahurco is a stunning event, but the people who live there thought nothing of it until campaigns by Ecuador’s Ministry of Tourism started attracting tourists over the past 10 years. Most families who live in the area make their living by tending herds of goats and cows that they harvest for meat, and planting crops of corn and sweet potatoes. “The goats would eat the flowers,” explains Horley Ruíz, who lives just outside the town’s entrance, “and that was that.”

Fabián Altamirano, the Zonal Coordinator for Ecuador’s Ministry of Tourism in Loja and the surrounding areas, is the person responsible for the thousands of tourists who have flocked to the area in the last five years. In 2009, Altamirano assembled a small team, including a photographer and videographer, to put together a pilot project to promote the area as a tourist destination. Once the images of flowering guayacán trees began to circulate, people from Quito and Guayaquil started to come see for themselves.

Since the town only receives visits from tourists for a few days a year, it’s up to the community to adapt and accommodate the needs of their temporary expansion. A municipal organization has built a few community-owned cabins. Some families offer their porches for tourists to set up their tents. Others open up their homes as make-shift restaurants or lend their showers and bathrooms to people who camp in designated areas of the forest.

Planning a trip to see the guayacán forest can be difficult to coordinate, because it blossoms with just a few days’ notice. The best way to see it is to be in Ecuador during January, and leave enough flexibility in your plans to set out for Mangahurco—a six-hour drive from Loja, the closest major city—at the last minute.

*Update: The story has been updated to note that Tabebuia chrysantha and Handroanthus chrysanthus are the same species.

Climate change is turning a Cold War project into an environmental hazard.
foreststreesecosystemsplants

Our Places Team shares spooky legends from both Transylvania and Appalachia.
forests

Environmentalists see small reforestation pilot sites around the capital of Amman as a first step to a greener future.
disasters

1:32
Want to see fewer ads? Become a Member.
From Around the Web
Atlas Obscura Trips
Magical Galápagos: Wonders of Evolution
View This Trip
Thanks for sharing!