Greenland Has a Grand Canyon Beneath Its Ice, Carved by Ancient Floods - Atlas Obscura 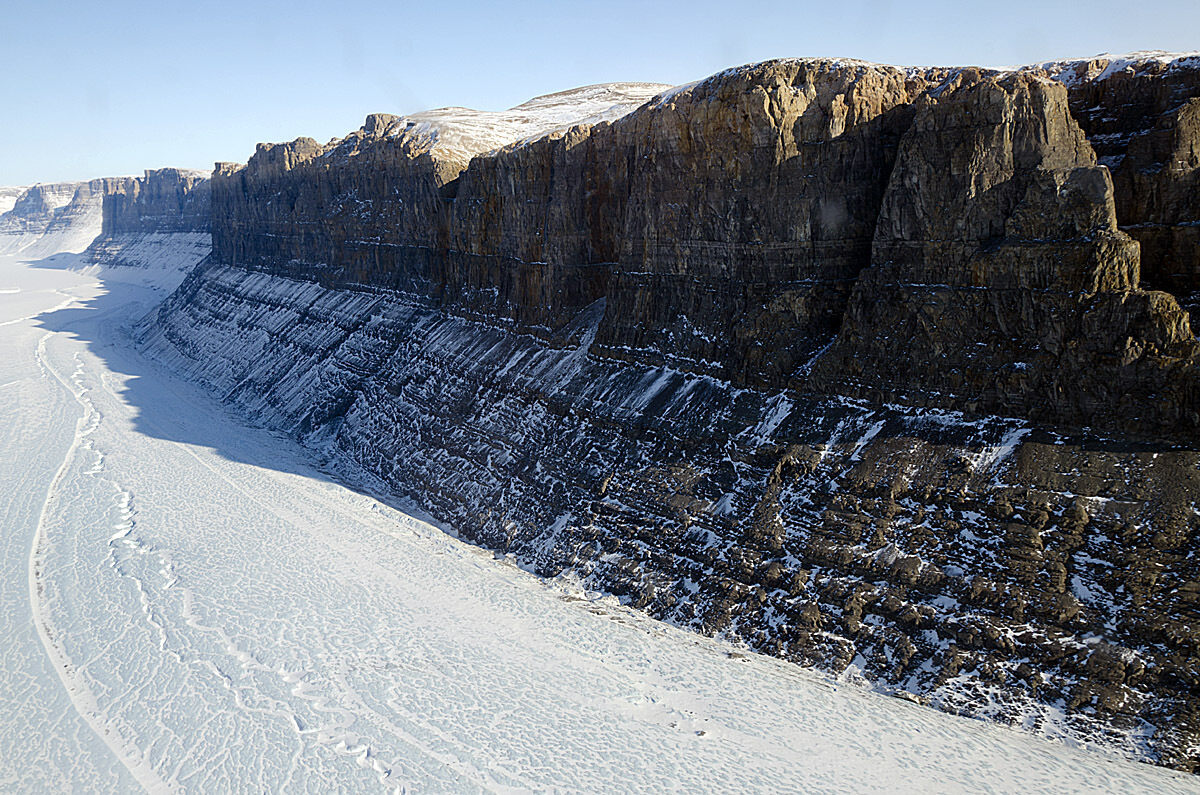 Northern Greenland is covered in rock and ice. The longest and deepest canyon on the landmass is buried miles below. Michael Studinger, NASA / CC BY 2.0
In This Story
Destination Guide

On its surface, Greenland doesn’t exactly live up to its name. It’s very cold and covered in a massive ice sheet that’s nearly two miles thick in places. But beneath that sheet there is a giant, rocky island that wasn’t always frozen over, with an undulating topography of valleys and river corridors, including one canyon as deep as the Grand Canyon in places and longer than its famous cousin—spanning the distance from New York to Washington, D.C., twice over.

“The Grand Canyon is something you can stand on the edge and see,” says Benjamin Keisling, a geologist and lead author of a new study on the formation of Greenland’s canyon published in the journal Geology. “The Greenland canyon we only know about through radar that can see through three kilometers of solid ice.”

According to the study, the canyon in northern Greenland came to be through repeated heavy flood events that forced water through the bedrock. “The canyon has been mapped before by other teams, but it’s also been enigmatic why it exists, and what relationship it has with the ice sheet itself,” says Keisling, a geologist now at Columbia University’s Lamont-Doherty Earth Observatory, who conducted the work as a graduate student at the University of Massachusetts at Amherst. “We proposed a mechanism for how the canyon may have formed.”

Temperatures on Earth have long fluctuated, most recently in the famous ice ages of the Pleistocene, which ended a little over 10,000 years ago. Over the course of many older fluctuations, dating back more than two million years, the Greenland ice sheet—the second largest in the world, to Antarctica’s—has had the chance to thaw, refreeze, and thaw again. Keisling’s team proposes that in times of rapid thawing, water may have collected in the depressed bedrock, and then broken through ice dams in diluvian outbursts, scouring the land with immense pressure.

The alternative theory for the shaping of the canyons would be the scraping erosion of glacial retreat and advance, the same process that created the Great Lakes and left big scrape marks in the schist of New York’s Central Park. But the canyon is too old for Greenland’s most recent ice sheet, and its veiny offshoots suggest a more liquid origin.

“We know also from previous work that when you map out the canyons underneath Greenland in a detailed fashion, they look more like river networks than if they were eroded by ice,” Keisling says.

He adds that the Greenlandic ice sheet was previously thought to have been frozen 2.7 million years ago and just stayed that way since, a concept now being challenged from multiple angles. Digging into the ancient climate through the events that shaped the land under Greenland’s ice has useful implications for the understanding of modern climate.

At least as long as we have it.

Climate change is turning a Cold War project into an environmental hazard.
ships

The Iceberg Trackers Keeping an Eye on the Ocean's Behemoths

As well as smaller bergs that can be more dangerous to ships.
science

What's Up With Those Deep Gashes in Antarctic Ice?

It ranks in the top 25 largest impact craters ever discovered.
Read more
Thanks for sharing!