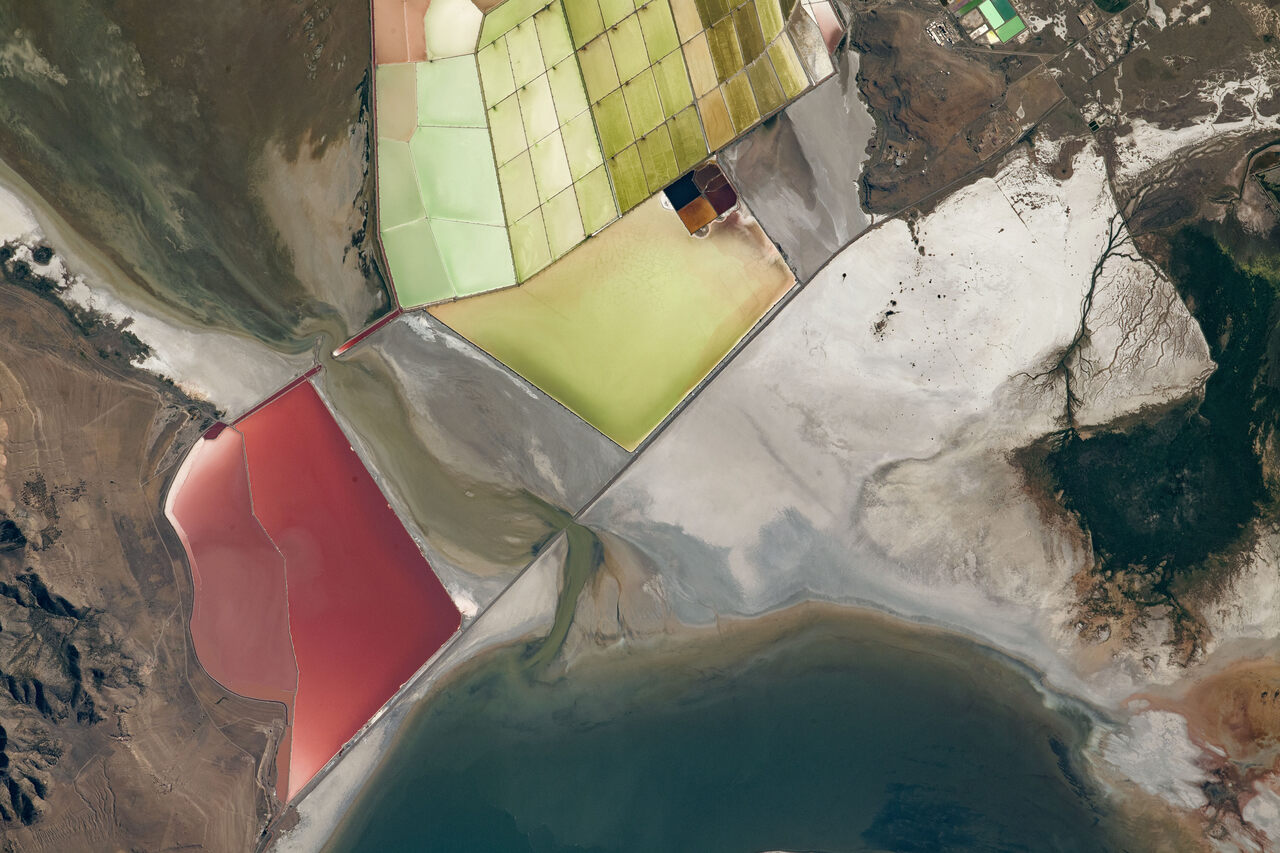 Much of Utah is beautiful, but much of it is also ruddy or yellow. The state is home to ochre-hued canyons, knobby sandstone monuments, and a grove of bright, quaking aspens, with canary-colored canopies and white trunks. But in northwest Utah, near the Promontory Mountains and the edge of the Great Salt Lake, things get much more colorful.

This photograph, taken by an astronaut aboard the International Space Station in July 2020, depicts some salt pans that abut the Great Salt Lake. One portion looks like melted raspberry sherbet, another a more subdued dusty rose. There are a smattering of greens as well, including pistachio, olive, mint, and something like the hue of military fatigues. It looks as if a giant went to an appropriately gargantuan Home Depot for paint samples.

The Great Salt Lake sits on the remains of the massive, ancient Lake Bonneville, but this colorful patchwork was made by human hands. The geometric shapes are shallow solar evaporation ponds. They work like this: Companies dig the ponds and let lake water in, the sun bakes the water, which evaporates and leaves minerals—the salt of the Great Salt Lake—behind. The various colors correspond to how much salt, bacteria, or algae is in the water in each holding area, according to NASA’s Earth Observatory, which shared the image, and reddish ponds tend to be saltiest. The famously salty lake, which appears bluish-green here, holds somewhere between 4.5 and 4.9 billion tons of dissolved salt, and has a chemical composition similar to that of typical ocean water, according to the Utah Geological Survey. (The lake’s salinity fluctuates as the water level rises and falls, but swimmers can typically float like buoys on the surface.) The water is rich in sodium and chloride, and also contains sulfate, magnesium, calcium, and potassium.

For decades, minerals from solar evaporation ponds near the Great Salt Lake have been harvested and pressed into blocks to be licked by livestock, or into pellets cast across roads to melt ice. They’re turned into fertilizer, too. According to the Utah Geological Survey, salt from the lake doesn’t become the food-grade stuff you sprinkle on your fries.

These ponds have also stirred up local controversy, the Salt Lake Tribune reports, such as when companies lobbied to expand their operations, drawing more water from the lake and encroaching on habitat that was a haven for birds. Recently, dropping water levels have made some of them concerned that their businesses will dry up, too, KUTV reported.

On the ground, these ponds and others like them can kick up murky questions about land use, sustainability, and access to natural resources. But they sure look lovely from above.

The otherworldly stars of a thriving industry and endless curiosity could be at risk if the lake continues receding.
volcanoes

In Iceland, Glacial Meltwater Creates a Stunning (and Small) Landscape

A photographer captured water's ability to carve out new paths in all their fractal glory.
mines

Ships, farms, and hotels were left high and dry when 90 percent of the water disappeared.
Video • AO Docs

1:18
Want to see fewer ads? Become a Member.
From Around the Web
Related

Yuncheng Lake is one of the country's oldest salt-production sites.
Read more
Thanks for sharing!