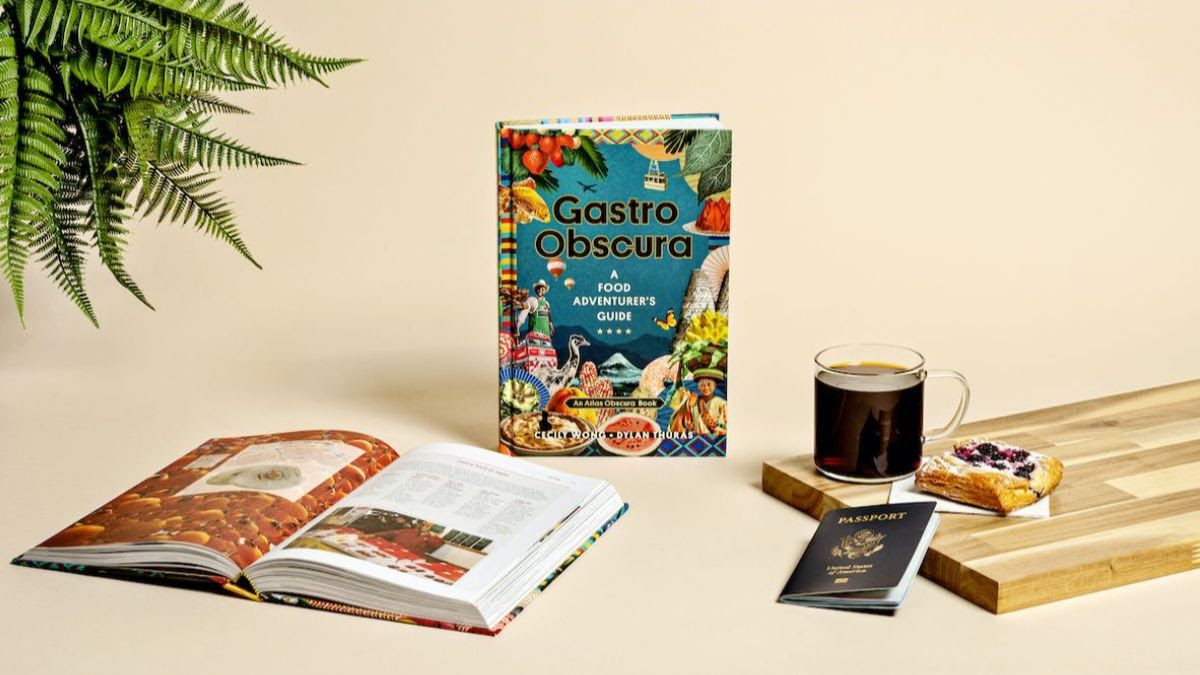 This article is adapted from the October 9, 2021, edition of Gastro Obscura’s Favorite Things newsletter. You can sign up here.

In 2017, I joined Atlas Obscura. Gastro Obscura did not yet exist, and I was given the dreamy job of assembling a team and launching a quirky new food publication. Ever since, our crew of food nerds has tried to share the wonder and curiosity we feel when learning about the history, culture, and surprising stories behind how we eat and drink.

From day one, our grand ambition was to publish a book. Like the Atlas Obscura book, it would be big and beautiful and take readers around the world. And as you probably know (from our many announcements!), that book is out today.

The book is titled Gastro Obscura: A Food Adventurer’s Guide, and I’m holding it right now. You can order it online, or find it in most bookstores.

Today, though, I’d like to invite you into the kitchen and introduce you to the many cooks behind this project. That’s because in addition to the book’s co-authors—the writer and novelist Cecily Wong and Atlas Obscura co-founder Dylan Thuras—the entire Gastro Obscura team contributed, along with talented freelance writers. And working in this crowded kitchen was both a challenge and a delight. Let’s hear from the team.

Rachel Rummel: The Ramos Gin Fizz. Despite being wildly inconvenient to prepare (it’s hand-shaken to a near-whipped state), this silky, floral cocktail outlasted Prohibition and continues to thrive in New Orleans. Also, the entry was beautifully illustrated in the book. The near-mythic fluffiness really comes through.

Sam O’Brien: I loved learning about fruits, vegetables, and legumes that taste like other foods—peanut butter, chocolate, ice cream … Yes, cooking can unlock a world of flavors, but nature offers a diverse and surprising menu on its own! Everyone on the Gastro team now has a Botanical Bucket List. It’s basically a race to see who can track down the peanut butter fruit first.

Dylan Thuras: One of my favorite contributions was learning and writing about the history of presidential cheese. The idea of the White House being just SULLIED by cheese is so funny to me. I also really enjoyed learning about beer brewing in North Korea and am desperate to try some of the steam beers brewed there—it’s a pretty specific style of brewing!

Anne Ewbank: If there’s one thing I love more than food, it’s prehistoric megafauna. And if you turn to page 358, you’ll learn about lestodons. These two-to-four-ton sloths loved the fatty avocado, and even engaged in a little casual genetic engineering, turning them into the larger fruits we now know through the simple technique of eating avocados, passing them through their huge digestive systems, and pooping out seeds across Central and South America.

What’s one thing you ate or drank while working on Gastro Obscura that you just did not like?

Cecily: Perhaps the most surprising discovery was that I like Jeppson’s Malört, which is considered one of the worst liquors in the world (even by the people who make it!). Something I did not like was chocolate hummus. This is not in the book, but hummus should not be made with chocolate.

Dylan: I recently tried what I would call “a tongue drug,” an herb known as gymnema sylvestre. It robs everything you taste of its sweetness. So it makes a great beer taste like garbage. Honey tastes like glue. It was an amazing experience to see what a world without sweetness would be like. The answer is NOT GOOD AT ALL.

Anne: 1950’s businessmen were known for keeping scotch in their desk, but Sam O’Brien proudly displayed a bottle of Malört on top of hers. For research purposes, because no one would drink Malört for pleasure. [Ed. note: See Cecily’s answer.] I still remember the taste sometimes and shudder.

Sam: Jeppson’s Malört was an … intense experience. I remember someone saying that drinking wormwood-flavored liquor was like having an angry ghost trapped in your throat. But if a Chicago resident offered me a shot, I wouldn’t turn it down. You don’t want to be rude.

How the Sausage Got Made

It’s a cliché that no one wants to know how the sausage gets made. But I’ve never believed that! Gastro Obscura even has an article series called How the Sausage Gets Made. So here are four inside looks into making the book.

What’s your favorite memory from making the book?

Cecily: While writing about the Sourtoe cocktail, Dylan got me a copy of the self-published “au-toe-biography” by Captain Dick, the man behind the incredible tradition of drinking a cocktail garnished with a severed human toe. It was the most fun extracurricular reading I think I’ve ever done. I also loved when the whole Gastro team did a Tim Tam Slam; it’s harder than it sounds!

Marc Haeringer: Seeing Cecily on a Zoom call wearing a hat fashioned from layouts of the book.

Rachel: I applied to the first Gastro Obscura fellowship using a writing sample about Vietnamese egg coffee, which ended up in the Asia chapter. I couldn’t have known at the time, but my travels ended up part of the book.

Anne: Seeing the first mock-up pages was such a thrill. We had already been working on the book for two years at that point, and that was when it started to seem real.

From drowning to murders to the mental toll of isolation, these stoic towers carry a full share of tragedy.
drinksbooksfood

A series of gift guides for the curiosity-seekers in your life.
food

It's time to change our 10,000-year relationship with cattle.
Video • Wonder From Home