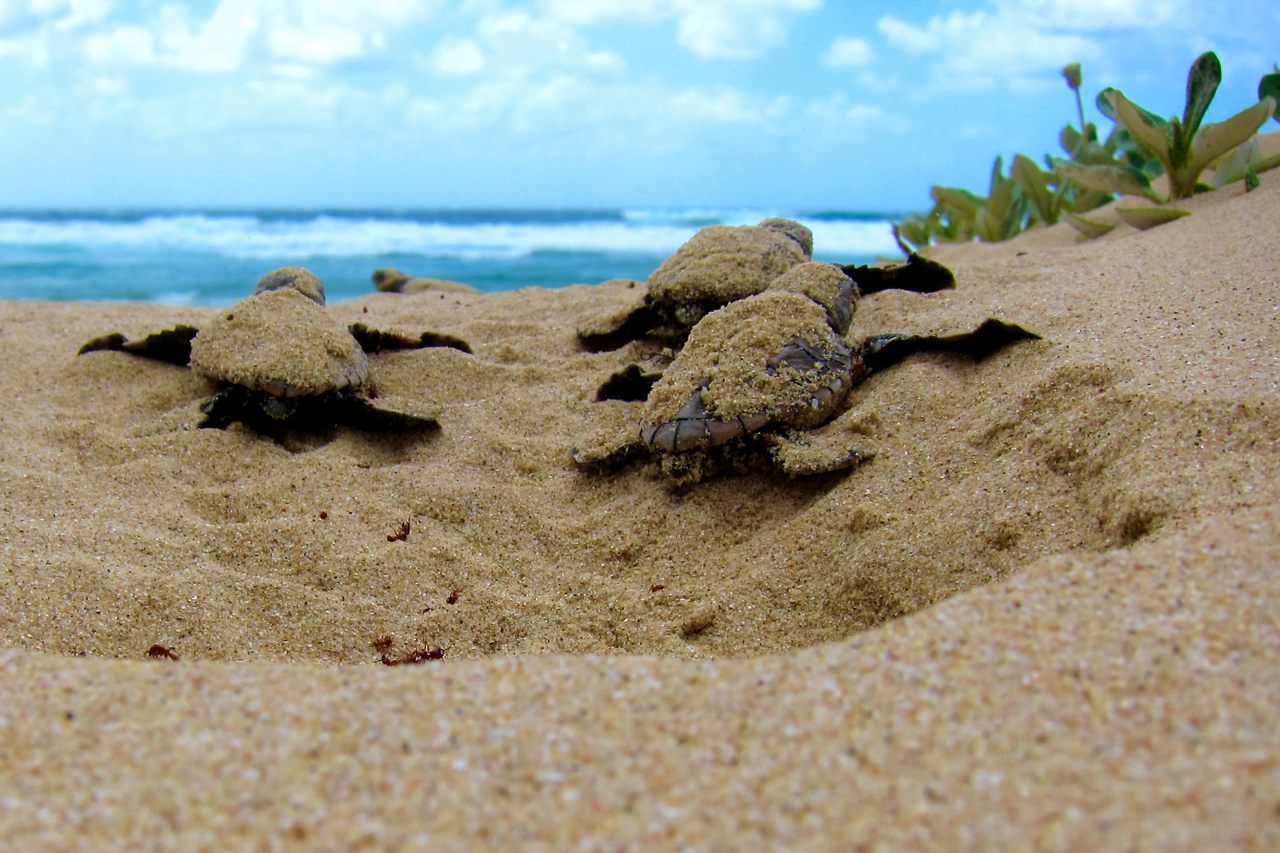 More than 100,000 years ago, a clutch of sea turtles hatched on the shores of South Africa. After breaking free of their soft, milk-colored shells, the hatchlings embarked on a clumsy, determined scramble toward the waves to begin their lives, doing their best to avoid the swooping maws of hungry birds overhead. This scene, which mirrors the first days of sea turtles today, can be seen in fossilized tracks discovered on what is now South Africa’s Cape South Coast and described in a new paper published August 23 in Quaternary Research by an international team of researchers. The tracks are the first known fossils of baby sea turtle trackways, and if Planet Earth had been around in the Pleistocene, David Attenborough would have been on the scene.

Jan de Vynck, a paleontologist at the African Centre for Coastal Palaeoscience at Nelson Mandela University in Port Elizabeth, and a coauthor of the study, first spotted the tracks on a large rock surface in 2016. He saw seven trails that run nearly parallel to each other—all heading to what would have been south, toward the sea. He hadn’t been looking for turtle tracks in particular, but was rather part of a team on a routine search for prehistoric prints. The Cape South Coast positively teems with them, including those from a prehistoric human, lion, rhinoceros, elephant, giraffe, and giant horse, among others.

The researchers identified two separate types. They believe the first tracks, distinguished by an alternating gait, were likely made by a hatchling closely related to the modern loggerhead turtle. The researchers say the second set of tracks, which are slightly wider, were likely made by a close relative of the modern leatherback. “The South African tracks named here are morphologically quite distinct from any turtle trackways previously described,” the researchers write in the study, noting that almost all previously known prehistoric turtle tracks come from freshwater species in the Northern Hemisphere. They created the names Australochelichnus agulhasii and Marinerichnus latus to identify the relatives of the loggerheads and leatherbacks, respectively.

Seaside tracks of this age can have many possible culprits—including crawling penguins, hopping frogs, or scuttling scorpions or crabs. But the distinctive pattern observed here helped the researchers eliminate the other options. Furthermore, the tracks were found in coastal deposits that reflect the kinds of setting where sea turtles would be likely leave their eggs, and the presence of seven parallel trackways suggests a flurry of individuals leaving a single origin point. The researchers believe the tracks were preserved after wind blew dry sand over the over wet, preserving the imprints. “It’s kind of amazing that the turtles would make these tracks for just literally a couple of minutes and the fossil record has captured this very unique activity,” says Martin Lockley, a geologist from the University of Colorado Denver and a coauthor of the study. “It’s literally the first steps these animals take.”

Today, loggerheads and leatherbacks no longer nest on the Cape South Coast on the south side of the country. They rely on rookeries found more than 600 miles to the northeast, along the KwaZulu-Natal coast, and the coast of Mozambique. Lockley says the turtles might have commonly nested in more southern beaches in the past due to warmer global temperatures, but they report two anecdotal sightings of nesting turtles there over the past 20 years, indicating a slight overlap with the prehistoric turtles’ breeding grounds.

Though the newly described fossils are remarkably preserved, they are not necessarily surprising. “I confess that given the fossil record for sea turtles goes back to around 100 million years ago, and sea turtles currently live off the coast of South Africa,” Anthony Fiorillo, a paleontologist at Southern Methodist University who was not involved with the study, writes in an email. “So one could make the prediction that such a fossil discovery was inevitable.” But Fiorillo says he finds the researchers’ case for the tracks’ origin to be convincing and well documented.

When Lockley first presented the fossilized tracks at a conference in South Africa, he says people gasped. “It’s an iconic sort of trace fossil,” he says, adding that he plans to go back to the coast this October to search for more trackways.

In Lockley’s eyes, tracks like these tend to be overlooked and undervalued in paleontology, as they can more valuable than fossilized bone, as they allow researchers to reconstruct behavior. These tracks, for example, prove that turtles once nested successfully on this coast, something a fossilized eggshell could never prove for sure. “I often joke with my colleagues that people who study bones and skeletons just study death and decay,” he says. “But people who study tracks are studying the living animal.”

Though turtle hatchlings from 100,000 years ago may have started life with a familiar race to the sea and long odds of survival to adulthood, they faced none of the thoroughly modern threats of light pollution, oil spills, plastic bags masquerading as food, and entanglements in fishing gear. Hungry birds, on the other hand, are forever.

More Than Half a Century of Microplastics Are Buried in Layers of Sediment, Like Synthetic Fossils

The reptilian critters may not have survived, but they made sure to sign off feet first.
art

It depends on whether a natural process could explain them.
turtles

The ancient relative of a popular (but invasive) pet.
science

Scientists have pieced together a detailed biography—including a search for love and a violent end.
Video • Object of Intrigue