For Sale: A 1699 Treatise on the Best Ways to Make Salad - Gastro Obscura
Want to see fewer ads? Become a Member. 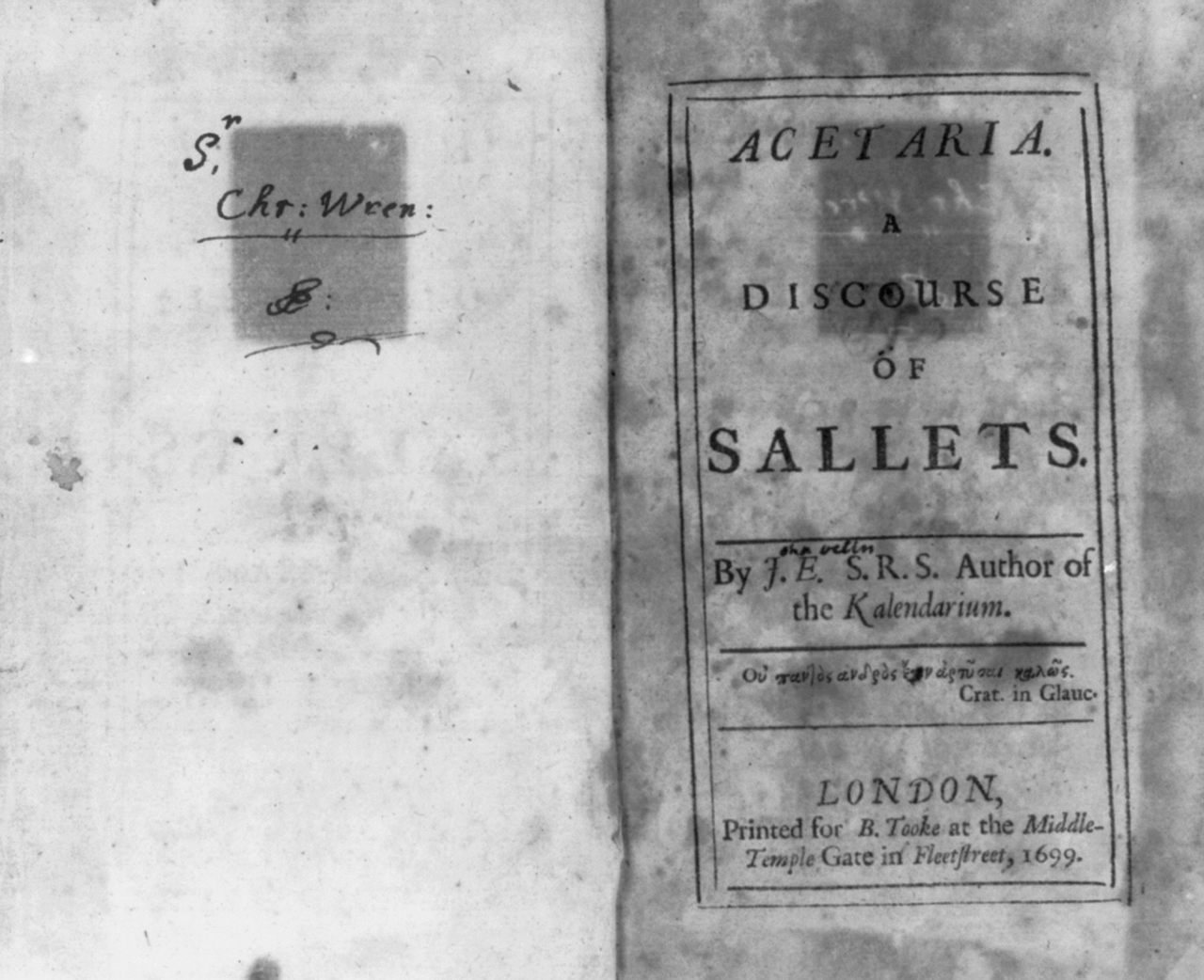 If only we still called them sallets. LC-USZ62-74066 (b&w film copy neg.)/No Known Restructions
In This Story
Destination Guide

Though John Evelyn cautioned that he was “not ambitious of being thought an excellent Cook,” he had no reservations about authoring a volume on the art of the salad. In his 1699 Acetaria, or A Discourse of Sallets (read: “salads”), Evelyn provides a most thorough guide to the joys of vegetarian living—complete with preparation instructions, a seasonal calendar for herbs and vegetables, and pithy, philosophical asides. A first edition of the book is now up for auction at Addison & Sarova, where it is expected to sell for at least $1,000.

Evelyn was not a chef by trade, but clearly knew his way around a garden and a kitchen, and understood just “how necessary it is, that in the Composure of a Sallet, every Plant should come to bear its part, without being over-power’d by some Herb of a stronger Taste.” With great patience and detail, he advocates for the careful handling of vegetables so that each might play its part most effectively. Heed, for example, his advice to “let your Herby Ingredients be exquisitely cull’d, and cleans’d of all worm-eaten, slimy, canker’d, dry, spotted, or any ways vitiated Leaves,” along with his precaution to render ingredients “discreetly sprinkl’d” rather “than over much sob’d with Spring-Water”—especially in the case “of the Cabbage-kind, whose heads are sufficiently protected by the outer leaves which cover it.” Once these measures have been carefully taken, don’t forget the Oxoleon, a dressing of “oyl,” vinegar, and salt by whose addition “the Composition is perfect … ”

Perhaps the most striking parts of the book are its tables detailing the different times of year suited to different plants. January, February, and March, for example, mark high times for endive, “Sellery,” and mint, among many others, while the next three months open the doors to young onions and “Persley.” Evelyn doesn’t stop there—the tables also include instructions regarding “proportion” (for endive: “Two if large, four if small”) and “culture” (“blanch’d,” “unblanch’d,” or “mingl’d with the Blanch’d”). One can picture Evelyn ordering at Sweetgreen, questioning whether certain items ought to be on the summer menu.

According to the Encyclopedia Britannica, Evelyn published 30 books on a diverse range of topics over the course of his life. He is most famous for his Diary, which he began at age 11 and continued for the rest of his life, and which has provided historians with a detailed look into 17th-century England’s high society. His other books deal with subjects including forestry, numismatics, and engraving—a variety that led friend and fellow diarist Samuel Pepys to playfully call Evelyn out “a little for conceitedness,” according to the British Library.

Evelyn’s taste for recognition is on view in the Acetaria (from the Latin acetarious, for “used in salads”), in which he derided meat-eaters’ “cruel Butcheries of so many harmless Creatures; some of which we put to merciless and needless Torment, to accommodat them for exquisite and uncommon Epicurism,” or pleasure-seeking. Evelyn was not a vegetarian.

Perhaps that’s why he quickly pivoted, acknowledging that condemning meat “is not my Business.” He only wanted to show “how possible it is by so many Instances and Examples, to live on wholesome Vegetables, both long and happily … ” It was a tall order at a time before vegetarianism had gone mainstream, one Evelyn met with characteristic flair.

18 Obscure Sports That Are Well Worth Rooting For

These giants fascinated both conservationists and loggers.
cemeteries

Up to 1,200 years old, the stately 'Seven Sisters' Oak has held the title for more than half a century.
film

Dorothy wore the disputed blue-and-white frock when she faced down the Wicked Witch.
Video

This bookstore serves recipes from the cookbooks on sale.
London, England