In the Footsteps of the 1906 San Francisco Earthquake - Atlas Obscura
Want to see fewer ads? Become a Member.
In This Story
Place

The miraculous hydrant that saved the Mission District in 1906.
Place

Portals of the Past

The remains of a ruined mansion memorialize the 1906 earthquake.
Place

“The Evacuation of San Francisco by Sea” by William Coulter

In the early morning hours of April 18, 1906, the city of San Francisco was shaken awake by a massive earthquake. For three days, the city burned. Many feared it was the end of the city, and fled. Outsiders speculated that she would never be the gilded city she once was. In some ways it was true, but in other ways the city is now at the same time utterly transformed by the devastation and somehow the same in her heart. 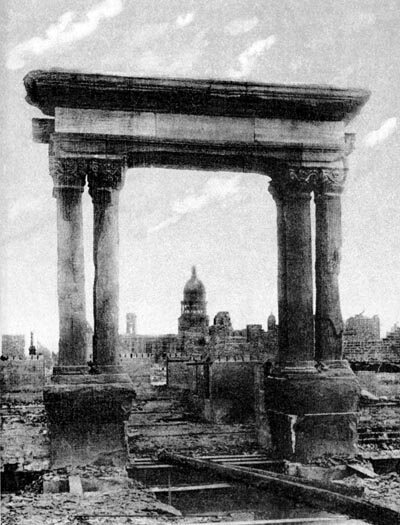 The view of the broken city, captured by photographer Arnold Genthe

Nearly all of the city’s buildings were destroyed, between 200,000-300,000 residents were left homeless, and approximately 30,000 people had to be evacuated by water. It remains one of the greatest disasters in United States history.

Some of our favorite places survived miraculously, others we wish we could have seen. Others that were destroyed pulled themselves out of the ashes to rise like the city’s symbol, the phoenix, to become cherished cultural institutions. The citizens of the city who stayed behind the rebuild became examples to the world of stalwart dedication.

A century and change later, there are still plenty of places to explore the legacy of the Great Quake of 1906 if you know where to look. Here are some of our favorites: 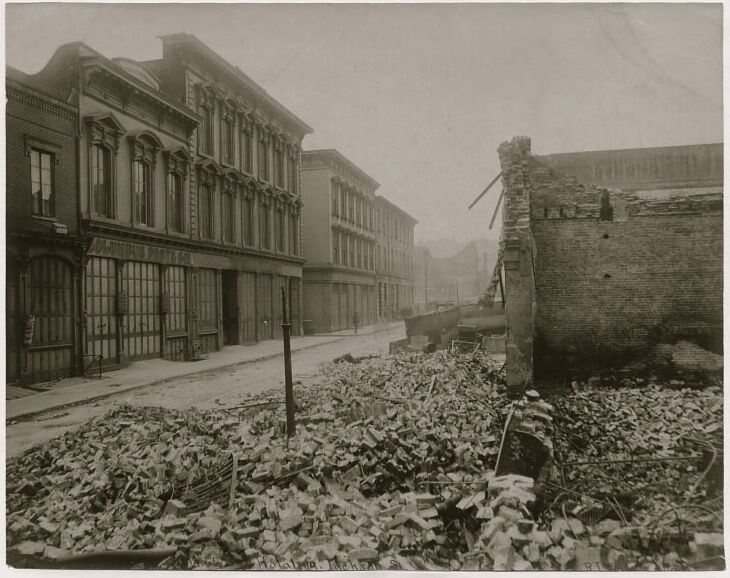 Downtown San Francisco was a mess.

Through an almost inhuman effort, the warehouse of Hotaling Whiskey on Portsmouth Square was saved through stretching firehoses across 11 blocks of the burning city, and later through the use of sewer water. Later, when the religious world was comparing San Francisco’s fate to that of Sodom and Gomorrah, the poet Charles Field had this response:

If, as they say, God spanked the town
For being over-frisky,
Why did He burn His churches down
And spare Hotaling’s whiskey?

The park itself had been rocked, and many of it’s early structures were destroyed or badly damaged. Nonetheless, massive temporary camps were set up on the site of the old race track and other open spaces housed thousands of people. 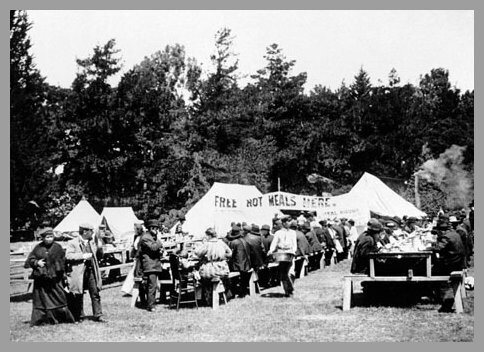 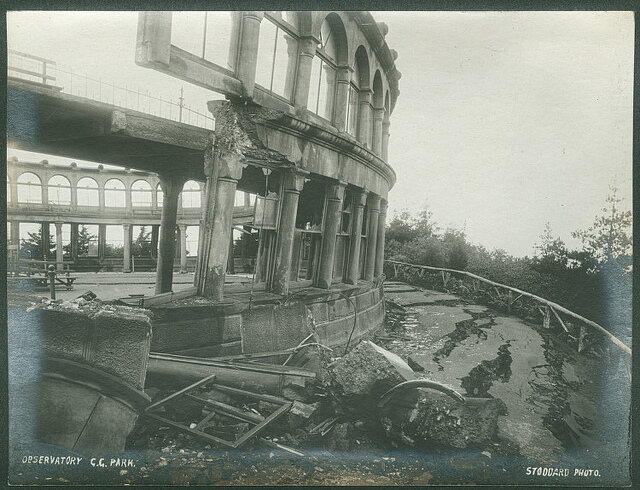 At the top of Strawberry Hill, at the center of Stow Lake, the graceful columns of Sweeney Observatory provided a lookout point and picnic spot for park visitors. Rocked by the earthquake, only the barest trace of its red foundations now remain visible.

In the Mission District, fires moved in and nearly destroyed the oldest building in San Francisco, Mission Dolores. In a miraculous turn of events, a single operational fire hydrant provided the water needed to save the mission and the neighborhood now named for it. 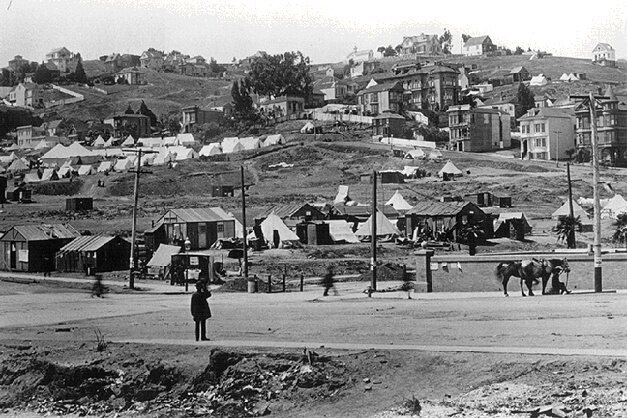 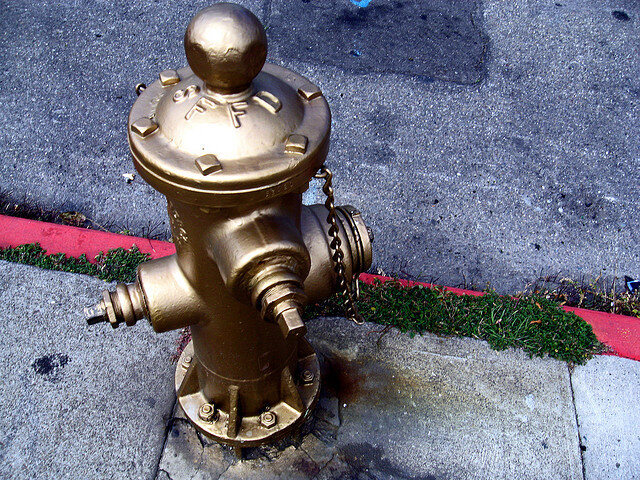 Golden fire hydrant at 20th and Church, above Dolores Park

The Golden Fire Hydrant at 20th and Church Streets is repainted every year, in memory of the heroic efforts made to save our city. 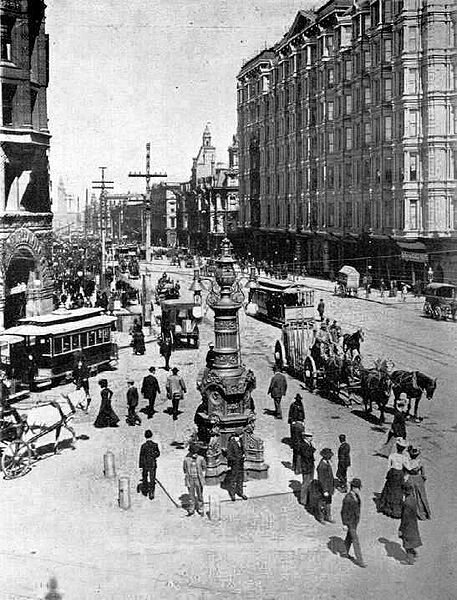 In the days and weeks after the earthquake and fires, refugees filtered back into the heart of the city and began rebuilding. People used Lotta’s fountain on Market Street as a meeting place and message board. Slowly, life in the city began to regain normalcy.

The lovely Lotta Crabtree, actress, singer, and protegée of the notorious Lola Montez had donated this 24-foot cast iron sculpture to the city of San Francisco in 1875.

Every year since then, Lotta’s fountain has been visited at 5:12 am on April 18 by survivors and those wishing to commemorate the memory of the great earthquake. 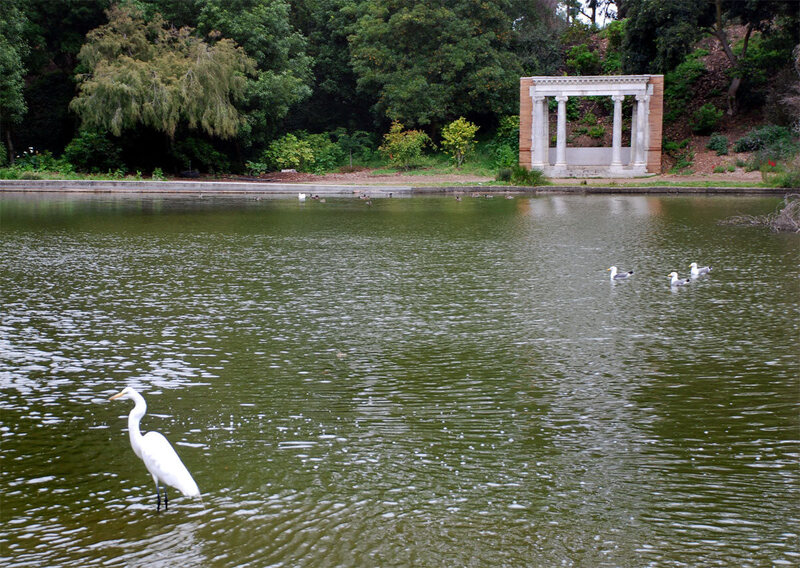 Portals of the Past on Lloyd Lake, Golden Gate Park

You might not guess, but these four columns sitting prettily on the shores of little Lloyd Lake in Golden Gate Park are actually earthquake survivors. 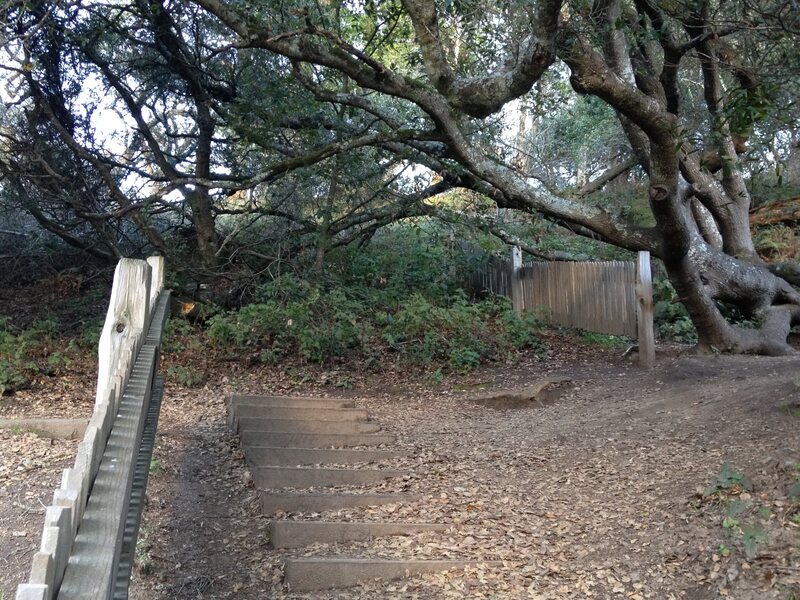 In Point Reyes, north of San Francisco, the 1906 Earthquake Fence stands as a physical reminder of just how far the Earth moved on April 18, 1906. 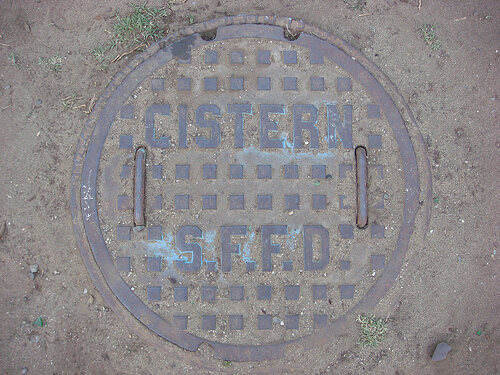 In San Francisco, new systems were put into place to prevent the kind of conflagration that nearly destroyed the city. Throughout the city a new system of reservoirs and cisterns and saltwater pumps were installed in the years after the quake. Today the underground cisterns are identifiable by the distinctive ring of bricks which mark their location. 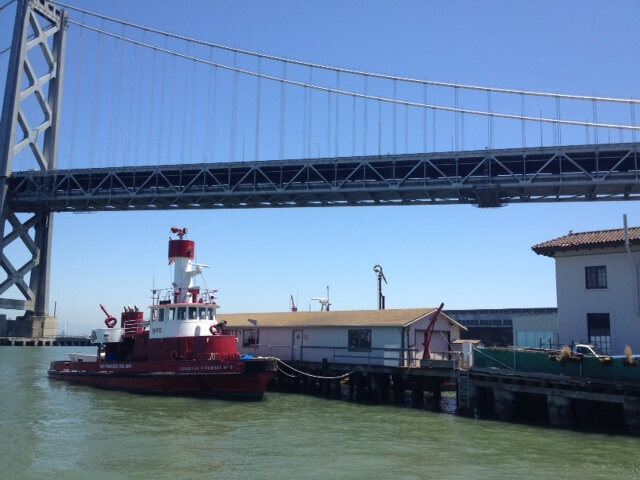 The city’s two fireboats, the Phoenix and the Guardian, stand in defense of the city from the Bay, capable of pumping thousands of gallons of saltwater into the city from their mighty engines. In fact, in 1989, when the city was rocked by the Loma Preita earthquake, it was the Phoenix that saved the Marina district.

In a city where we are always facing the possibility of a new great quake, it is inspiring to look back at the momentous efforts of the citizens of a century ago who rebuilt San Francisco to become the city we know today. Perhaps the plaque placed at the golden fire hydrant puts it best:

“Dedicated to chief Dennis Sullivan and the men who fought the Great Fire and to the spirit of the people of San Francisco who regardless of their losses brought our city from its ruins to be host of the world with their 1925 Pan Pacific Exposition and the building of our Civic Center.”

May their love and devotion for this city be an inspiration for all to follow and their motto “the city that knows how’ a light to lead all future generations.”