Living Off the Land in the Arctic Circle - Gastro Obscura 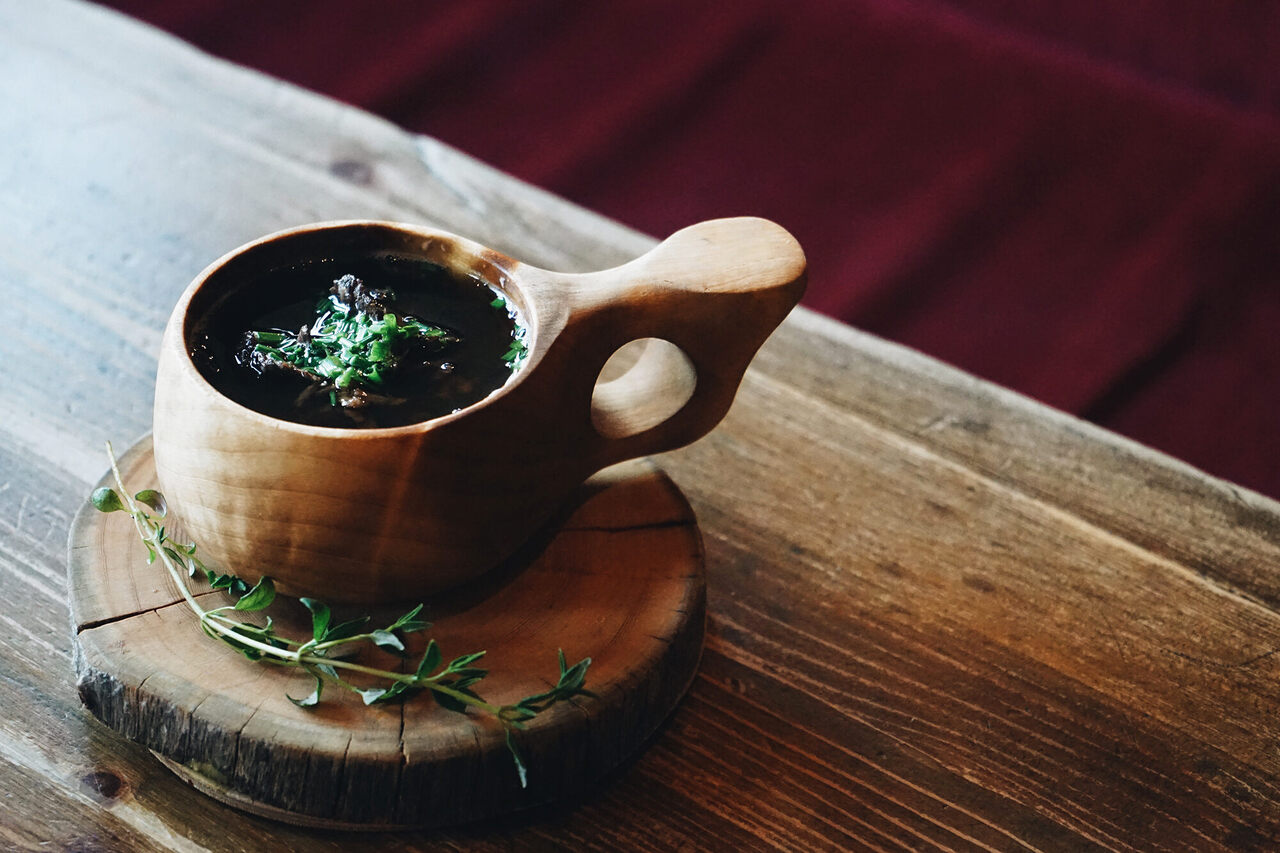 Bear soup. All Photos: Eileen Cho
In This Story
Food

The wild region of Lapland, in Finland, is located so far north that it experiences nearly endless summer sunlight, which locals refer to as the “Midnight Sun.” But when summer ends, the sun soon sets just a few hours after it rises. This unique, Arctic Circle climate produces flora and fauna found in few other places. For generations, residents of Lappi, as the Finnish call the area, have spent the summer and early fall hunting, butchering, and freezing moose and reindeer, as well as collecting as many berries, herbs, and mushrooms as possible.

Lapland’s capital, Rovaniemi, has a population of around 60,000 and multiple supermarkets, which residents could visit in lieu of storing away everything they need for the winter. But with their backyards and nearby forests offering abundant, high-quality ingredients, and grocery stores lacking beloved staples such as moose tongue and charging high prices for berries, many prefer to spend their time outdoors, preparing for winter.

At 4 a.m. on a rainy weekday morning, Kimmo Kähkönen, dressed head to toe in neon-orange hunting gear, releases a GPS-equipped hunting dog into the forest. Seated beside a bonfire on the forest’s outskirts, he follows the dog’s progress through an application on his daughter’s iPad. We’re at a campsite where Kähkönen often meets members of his hunting club to enjoy snacks—grilled sausages, homemade Finnish bread with cheese, and coffee in a kuksa, a Finnish wooden cup—while the dogs track moose and bears.

This kind of cooperation is typical in Lapland. Kähkönen belongs to Lapin Keittiömestarit r.y, an organization of some 50 chefs devoted to preserving Arctic cuisine in Finland by sharing tips on hunting, gathering, and preserving food. His hunting club shares ATVs (for transporting game) and dogs, each of which is trained to hunt a specific type of prey.

While Kähkönen is executive chef at the upscale Ravintola Monte Rosa restaurant, he often takes a month off solely to hunt. Following Finnish law, he trained and passed a rigorous test before receiving a permit at the age of nine and a weapons permit at age 15. This year, the Finnish Wildlife Agency gave him a permit to hunt two adult moose, two moose calves, and a bear in September.

After two hours at camp, Kähkönen sees on the iPad that the dog has stopped moving. Thanks to the dog’s bark recorder, he also knows it’s being loud—the dog’s instinctive response to the moose slowing down. He enters the forest, following the barks, and after three effortful hours, he alerts us to come with the sound of a gunshot.

Using the iPad, we find Kähkönen already preparing a moose to load onto an ATV. Selling the meat to stores and restaurants requires a trip to the veterinarian, for her seal of approval. But as this is his first kill of the season, Kähkönen plans to use this meat, all 1,000 portions of it, to share with his hunting club members and his family.

Before he became an executive chef at Arctic Boulevard, where he prepares tasting menus of Arctic cuisine, Matti Eemeli Seitamo learned from his grandmother how to gather berries and mushrooms and preserve them for winter.

About 30 minutes outside the city center, we walk into a part of the forest where he knows there are still mushrooms and berries this late in the season. Most locals know what is good to pick and what isn’t. Without even opening a mushroom, Seitamo knows how to avoid ones crawling with worms, and he easily spots a poisonous variety. Like Kähkönen, Seitamo is quiet and reserved. But he seems excited to be gathering ingredients, and relaxed by this time outside of the kitchen. We spend six hours picking berries and mushrooms before driving back.

In the kitchen the next day, Seitamo brushes off the dirt and washes our two buckets of mushrooms. He prepares lingonberry syrup by mixing fresh berries with a generous portion of sugar. Next, he starts the mushroom-pickling process by sealing them in a bag with vinegar, sugar, water, salt, mustard seeds, rosemary, and bay leaf. The fermenting took days back when he used jars. Now, vacuum-sealing the mushrooms makes the process almost instant. As he pickles, Seitamo reminisces about how his grandmother pickled mushrooms and berries and left food outside in the cold. Although they’ve been replaced by refrigerators, many apartments and homes in Finland still have outdoor potato-storage areas.

Seitamo and Kähkönen are friends, distant relatives, and collaborators in the kitchen. Soon, Kähkönen arrives with a tray of homegrown Lappish potatoes and a pot of boiled moose tongue from yesterday’s hunt. The two work harmoniously, one preparing vegetables while the other slices and smokes the moose tongue. They plate the tongue slices with Lappish potato salad, pickled mushrooms, and lingonberry syrup. For the entree, Seitamo and Kähkönen cook moose filet in their charcoal oven, a common Finnish cooking method. If the weather were better, they’d do this in the forest, the way they and other locals have cooked their whole lives.

The chefs are excited to share this meal with me. They didn’t think the hunt would succeed this early in moose-hunting season, and they’re proud to share food they completely gathered themselves. Over the coming months, they’ll keep gathering and hunting to ensure their restaurant fridges are equipped for tourist season in the winter.

When Irene Kangasniemi shows me her freezers in early September, the berry freezer is full with raspberries, lingonberries, rovenberries, bilberries, and cloudberries, with just enough room available for her winter cranberry collection. Her fish freezer is half full, since her husband just returned from a fishing expedition with white and perch fish. Her meat freezers contain only a few bags of moose and reindeer meat, vacuum-sealed and labeled in marker. In October, though, Kangasniemi and members of the Reindeer Herder Association will slaughter a portion of their herd, which will fill the last two of her five freezers.

Kangasniemi is an avid cook, interior designer, and reindeer herder who lives mostly off the land. She estimates that 90 percent of her food comes from the forest—she buys only coffee, salt, butter, and a few other staples at the store. Her husband Ari built their home.

“We don’t hunt for sport, but for food and survival,” says Kangasniemi. Dressed in Finnish clothing and Chanel glasses, she explains that her husband fishes across the Arctic, her relatives hunt, and she spends six months a year collecting food for her family. Sometimes she gathers berries at midnight, since it’s no different than being outside in the afternoon during summer’s longest days.

Currently, she has around 45 kilos of cloudberries and bilberries frozen in plastic containers, a fraction of which she’ll make into juice and jam. Berries are an important vitamin source, since access to vegetables is rare. When I ask if they eat greens, Kangasniemi smirks and replies, “Excuse me, we don’t eat anything green since they don’t grow here.”

The family’s most important asset, though, is the herd. Kangasniemi won’t say how many reindeer they own, because that’s “like telling someone how much money you have.” The herd is semi-wild, and taken care of by a nomadic herder who travels with them.

“Killing animals for food is our life,” she says. “Buying meat at the grocery store is difficult and weird. I have my own reindeer. I only eat beef when I am at a restaurant.”

Kangasniemi takes out a vintage Arctic cuisine cookbook, Lapin Klokia. She shows me recipes for bear claw, reindeer pâté en croûte, and reindeer-milk ice cream, which was once made and stored in the stomach of reindeer. Vegetables are scarce; game is abundant.

She’s proud of these foods, but she worries that climate change will erode these traditions. An unusually warm summer affected the reindeer’s migration, as they travel to find and eat lichen, which is particularly susceptible to climate change. It’s also led to berries rotting in the forest more quickly. She fears that she’ll need to rely more on stores, even though, like most locals, she questions the point of purchasing berries and other ingredients that she can gather for free while enjoying nature.

Tell Us How You Overcame Your Biggest Food Fear

What happened when you finally tasted something you'd previously been repulsed by?
how the sausage gets madecookingarctic circlehuntingvisualphotographyfood

This niche practice was commonplace in North America for centuries.
food

In rural France, filling homes with pate and sausage was once a matter of survival.
food

This Food Was Once Packaged Military Rations

Mesmerizing Photos of Abandoned Structures in the High Arctic

In northern Scandinavia, cups of coffee get enhanced with cheese.
Gastro Obscura

Think of it as the Great Indoors.
Read more
Thanks for sharing!