On the Coast of British Columbia, Ancient Stewardship Gets a Modern Spin - Atlas Obscura
Want to see fewer ads? Become a Member. 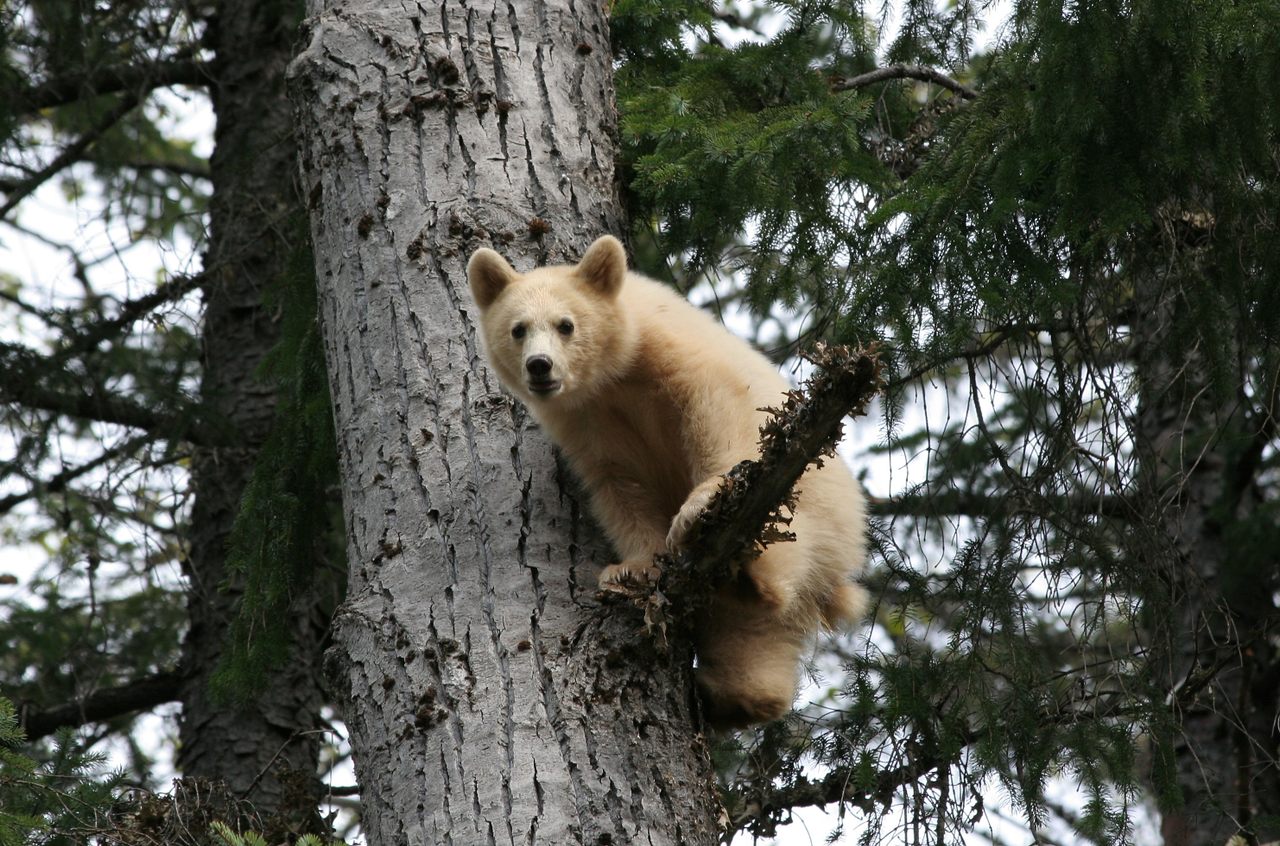 A young spirit bear, part of a genetically unique population found only in Great Bear Rainforest on British Columbia's central coast, is one of many animals First Nations coastal guardians work to protect. Mike R Turner/Getty Images
In This Story
Place

This vast, pristine wilderness is home to a rare subspecies of black bear.
Destination Guide

No one knows how long diesel had been seeping from a crack in the tanker truck, parked at an old cannery on the bank of Rivers Inlet, a fjord about 300 miles north of Vancouver in the heart of Wuikinuxv First Nations Territory. By the time somebody noticed, more than 2,000 gallons of fuel had leaked onto shore and into a waterway teeming with crab, salmon, and spawning candlefish.

On February 15, 2021, within an hour of being notified about the impending disaster, members of the Wuikinuxv Coastal Guardian Watchmen program arrived on the scene, assessing and containing the spill. The next day, fellow guardians from the neighboring Heiltsuk Nation came with supplies and additional manpower. By the time provincial officers showed up three days later, 90 percent of the spill area had already been contained.

It’s not unusual for provincial or federal officials to be late to a crisis along the central coast of British Columbia, where roads are scarce and the weather fickle. During a major oil spill in 2016, it took emergency response crews 34 hours to begin mitigation. When a ferry sank in 2006, members of the Gitga’at Nation rescued 99 stranded passengers in the middle of the night, well before the Coast Guard got there. When endangered humpback whales get entangled in fishing gear, whole days sometimes pass before experts at Fisheries and Oceans Canada arrive.

Here in the Great Bear Rainforest—a vast region of old-growth forest and icy fjords that harbor iconic animals including wolves, whales, and ghostly spirit bears—hands-on stewardship has always been a way of life for the Indigenous people who call it home. Now, thanks to a new co-management agreement with British Columbia, the first time a Canadian government has shared authority with any First Nation, that stewardship will have an even greater impact.

For years, a vacuum of authority in the Great Bear Rainforest wasn’t just a problem during emergencies. Often understaffed, and outmatched by the sheer scale and remoteness of the area, government agencies have long relied on an annual visit or aerial surveys to enforce regulations and gather data. Douglas Neasloss, chief councilor and stewardship director of the Kitasoo/Xai’Xais Nation, says that his community rarely saw representatives on the ground.

“We were watching…frustrated,” says Neasloss, remembering a time 20 years ago when poaching and illegal logging were rampant in their territory. “So we bought a boat and got to work.”

The Kitasoo/Xai’Xais Nation and others in the region decided to take advantage of an unusual freedom. Unlike other parts of Canada, treaties over territory were never negotiated between the government and most First Nations in British Columbia, meaning the Nations didn’t need to ask anyone’s permission to continue caring for the land, just as they had for more than 10,000 years.

It was out of this ad hoc effort to stop the tide of illegal activity that the coastal guardian program was officially launched in 2005. Since then, eight Nations have developed their own guardian program, patrolling their traditional waters while working across territories to preserve and advocate for the region’s bounty of natural resources and wildlife.

But it wasn’t an immediate success. “A lot of people didn’t know who we were or what we were doing out there,” remembers Ernie Tallio, the Guardian Watchmen manager for the Nuxalk First Nation.

Brady Stjerneberg, a former Kitasoo/Xai’Xais guardian, recalls that during his first years on the job, he saw “a level of dismissal,” from people he encountered. “They’d kind of be like ‘what authority do you really have?’” The addition of uniforms and boats sporting the program’s insignia earned the guardians credibility among locals and visitors, and over the years Stjerneberg says attitudes have improved. “Having that constant presence on the water helped that a lot.”

Since they started keeping track in 2010, guardians, who number between 40 and 50 in a given year, have spent more than 40,000 hours on patrol, enforcing federal and provincial laws—things like seizing illegal crab traps and documenting derelict vessels—as well as Indigenous laws, keeping boaters out of culturally and spiritually significant areas, for instance, and cracking down on trophy hunting.

But the guardians’ job isn’t all about busting people doing bad things. “We’re not out there telling people to get lost. It’s about welcoming and educating them,” Stjerneberg says.

Guardians play an important role in helping visitors have a positive experience, introducing them to the local flora and fauna and safe ways to interact with them.

The guardians themselves aren’t immune to the wonders of the Great Bear Rainforest. Ivan Robinson, a new Kitasoo/Xai’Xais guardian who recently graduated high school, says his favorite part of each day “is coming back home to tell my family what we saw.” Becoming a guardian was Robinson’s childhood dream after going out on the boat with one when he was a young boy. He says the mentorship he’s received from older guardians—learning traditional practices like medicine making, food harvesting, and fishing—has been transformative. “It’s bringing out the real me,” Robinson says.

Still, Robinson admits there’s a lot to take in, from figuring out how to operate the boat and navigating labyrinthian waters to mastering the principles and methods of conservation science.

In addition to enforcement and visitor outreach and education, guardians are tasked with myriad aspects of environmental management. On any given day they might monitor seabird colonies for invasive rodents, walk creeks to count spawning salmon, or track bear movement through fur-sample collection. These often massive sets of data help the Nations keep track of the health of their own territory—and are also essential in the creation of new provincial and federal policies.

In July, British Columbia banned black bear hunting in roughly 3,000 square miles of the rainforest after DNA gathered by Kitasoo/Xai’Xais guardians revealed that spirit bears were even rarer than originally believed.

This decision came only months after both the Kitasoo/Xai’Xais and the Nuxalk signed a landmark agreement with British Columbia giving the guardians of those Nations all the authority of a BC Parks ranger during a two-year pilot program. While the guardians will still be employed by their Nations, they will be able to, for example, patrol provincial parks and issue tickets to rule-breakers. In the past, they could only snap photos of the scofflaws and send them to provincial authorities hundreds of miles away for further investigation.

Nuxalk Watchmen Manager Tallio says the agreement made him think of his early days as a guardian, when what he calls “proper authority” felt elusive. “So the program with BC Parks is quite a big deal,” he says.

“It’s a massive deal,” agrees Neasloss. “It’s the first time any government has shared authority with any First Nation.”

As part of the pilot program, guardians now sport a BC Parks patch on their uniform as they set out each day to watch over the mountains and fjords first named by their ancestors. The patch, says Stjerneberg, “just gives us that much more credibility. We all stand up a little taller.”

To save her native Maya bees and their shrinking forests, Leydy Pech waged a fierce campaign on multiple fronts.
forests

A Year of Stories About Indigenous Achievement and Innovation

This year we highlighted ideas around the world to address some of our most persistent problems.
science

The Scotty Creek facility was part of an unprecedented First Nations effort to study and save the Arctic. Then the fire came.
Video • Object of Intrigue