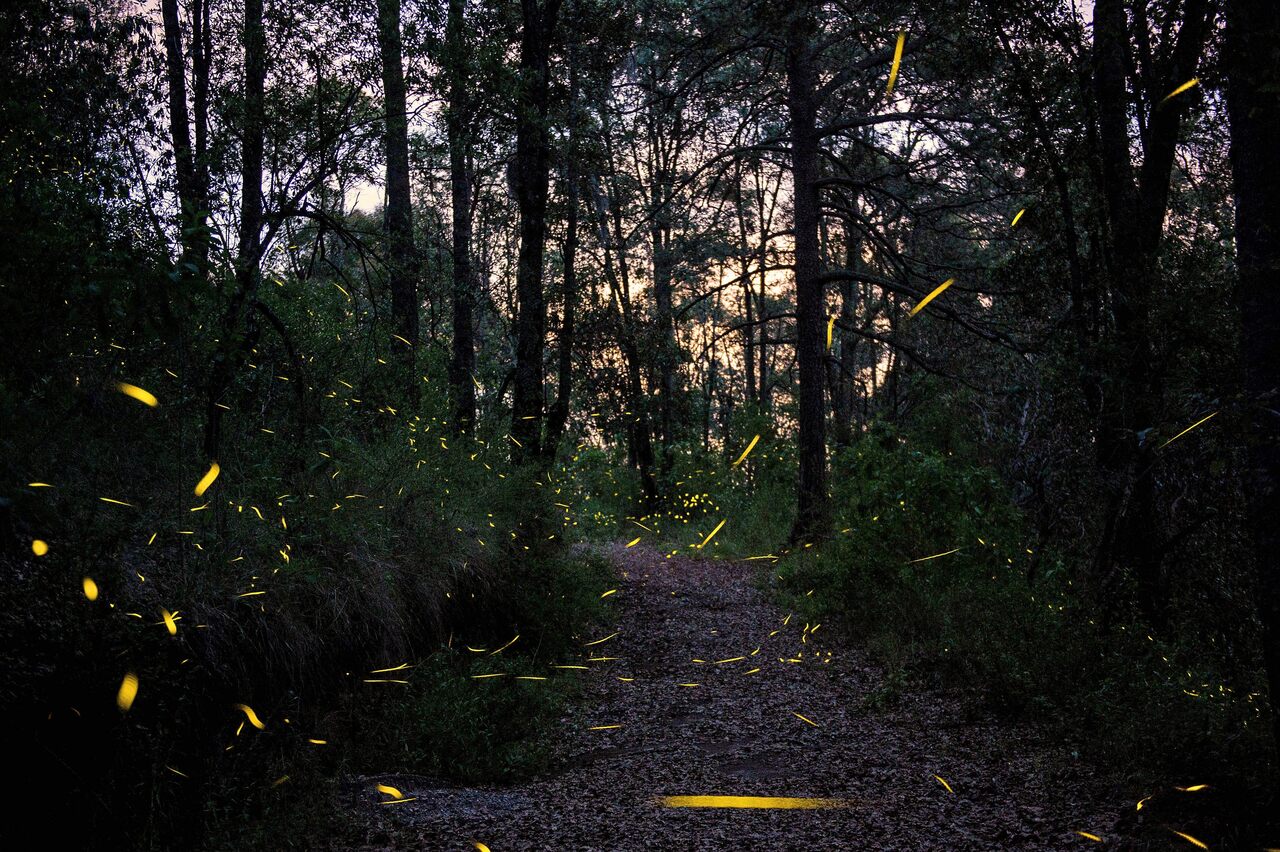 Firefly populations seem to be flickering in many spots around the world. The insects are pictured here in the Santuario de las Luciernagas, in Tlaxcala, Mexico, in 2017. MARIO VAZQUEZ DE LA TORRE/AFP via Getty Images
In This Story
Place

Malaysian fireflies create a dazzling display as thousands light up in unison.
Place

For two weeks every June, fireflies in the Smoky Mountains perform an astonishing light show.

When fireflies fill the night air, they can look almost like suspended, molten gold. “They spark wonder in people,” Sara Lewis, a biologist at Tufts University, recently told The Guardian. “When you are in your backyard or park, you notice them and are amazed.”

In a new paper in the journal BioScience, however, Lewis reports that we’re probably not so good for the glowing beetles. Along with an international team of 11 collaborators, Lewis sounded an alarm on behalf of the 2,000 firefly species worldwide, suggesting that even as people bask in their enchanting light, we are also imperiling their survival.

Though insects are all around us—entomologists at the Smithsonian’s National Museum of Natural History have estimated that there are roughly 200 million insects for each person on the planet—it can be hard to figure out exactly what’s up with our little flying or scuttling neighbors. Millions of species have yet to be described. Many known ones are small and short-lived, and they can be difficult to survey or monitor, partly because tracking or tagging them is finicky, frustrating work.

Fireflies present their own challenges: Many are active at night, when humans are typically snoozing, and details are especially hard to see. Unlike moths, fireflies don’t flock to light traps that scientists set out to study them, and unlike butterflies, “you can’t just walk around and count them,” writes Avalon Owens, a graduate student in biology at Tufts, and one of the study coauthors, in an email. It can be hard to identify a species without dissecting it, and to differentiate a single, busy beetle from a group of them. “If you’re standing there in the dark, it can be hard to tell if you are seeing one firefly flash a bunch,” Owens writes, “or a bunch of fireflies each only flashing once in awhile.”

Some surveys in Malaysia have revealed a decline in the mangrove-loving Pteroptyx tener firefly, and Lewis and her collaborators have heard troubling anecdotes about other species taking hits. But across species, firefly population data is pretty sparse.

To get a better handle on how fireflies are faring across the planet, in January 2019, the study authors—all of whom are affiliated with the Firefly Specialist Group of the International Union for the Conservation of Nature Species Survival Commission—sent an email survey to 350 people through the Fireflyers International Network, a research and advocacy group that includes ecologists, taxonomists, conservationists, and other experts. Respondents were asked to rank and describe various threats that they perceived to fireflies in their region, including habitat loss, invasive species, light pollution, and the drought, sea-level rise, higher temperatures, and flooding associated with climate change.

After tossing out the responses that didn’t rank all of the threats, the authors were left with 49 surveys. By pairing those with recent research on these various threats, they outlined some of the factors most likely to be putting fireflies at risk.

The biggest perceived threat appeared to be habitat loss, trailed closely by light pollution. Many species struggle when lands are splintered or eaten up by housing or roads. Respondents also lamented agricultural intensification in Italy, and the uptick in pesticides and fertilizer that came with it. In Mediterranean Spain, some species floundered when abandoned orchards no longer teemed with the snails that they feast on. Japan’s firefly havens, satoyama—traditional, managed landscapes with ponds, rice paddies, and forest-flanked fields—haven’t been as plentiful as people continue to stream out of rural areas, the authors write.

Many fireflies that like it dark, and depend on inky skies to swap courtship signals, may struggle to carry out their flirtations in the artificial light of billboards, homes, or even flashlights and cameras. Tourism can also be a drag, the authors add—especially when motorboats erode the riverbanks where larvae cluster, or travelers inadvertently trample the flightless females of species that stay close to the ground.

Still, this is a relatively early warning, not a clanging death knell. The “survey results should be interpreted with caution,” the authors note, “because they reflect only expert opinion concerning perceived threats to firefly species persistence.” But if we want to keep being mesmerized by fireflies’ golden glow, from the Great Smoky Mountains of Tennessee to Kampung Kuantan, Malaysia, more monitoring data is needed. Long-term surveys would be especially helpful, Owens says.

“We also need to know how fireflies move,” she writes. “When they disappear from a habitat, are they gone forever, or have they simply moved elsewhere? Just knowing more about which species of fireflies are where right now would be a huge help. It’s actually crazy how little we know about these amazing insects.”

How Landmines Made This Sri Lankan Lagoon an Avian Paradise

Walden Pond Is Full of Jellyfish, But Don't Panic

Many viewers want to bask in synchronous fireflies' glow. Ecologists want to ensure that the insects aren't hurt in the process.
dogs

A new paper argues that cities can make a lot more space for milkweed, in particular.
Video • AO Docs

11:15
Want to see fewer ads? Become a Member.
From Around the Web
Related

Poaching puts local fishers at risk, and two scientists are helping to brainstorm solutions.
Read more
Thanks for sharing!