All Your Favorite Island Vacation Spots Have Been Overrun by Feral Chickens - Atlas Obscura
Want to see fewer ads? Become a Member. 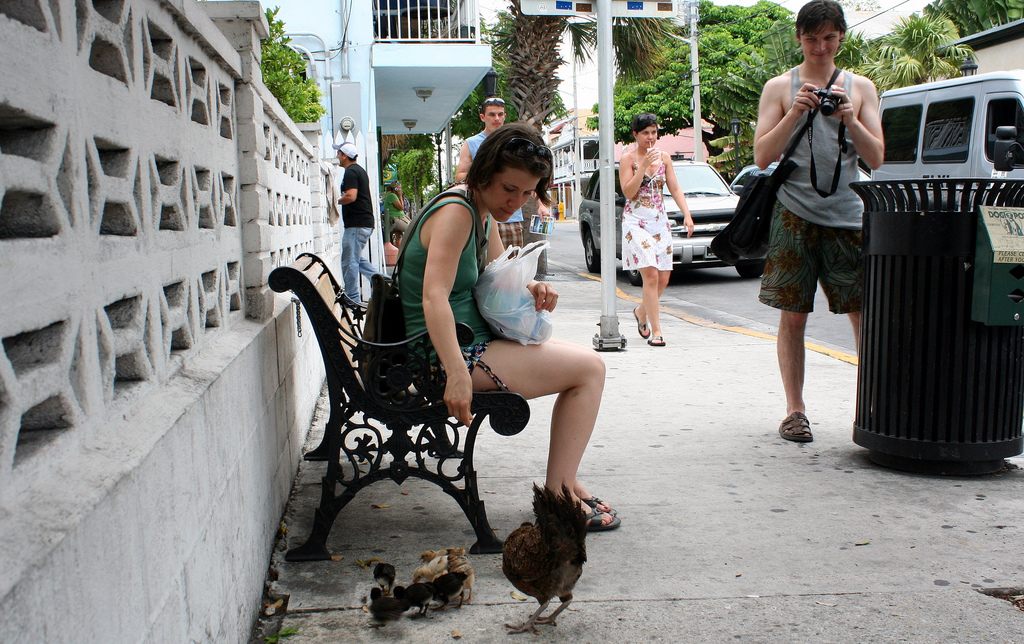 Feral chickens have made a good life for themselves in Key West. Ray_LAC/CC BY 2.0
In This Story
Destination Guide

One day in early 2004, Armando Parra Sr. unlocked his Key West barbershop and found something menacing waiting for him: There, in the middle of the floor, was a sprung wire trap with a rotisserie chicken inside. The latest weapon in an ongoing battle to manage the island’s feral fowl population, Parra had recently been named the city’s official chicken-catcher, charged with capturing as many of the birds as he could and deporting them upstate. But not everyone wanted him to do his job.

Parra had been excited to get the gig, selling branded T-shirts and interviewing happily on CNN. “I didn’t realize it was going to be like this,” he later told the Miami Herald. He had learned the first lesson of island chicken management: It’s almost always too soon to crow about success.

Over the past few decades, island destinations from Bermuda to Hawaii have had to contend with an influx of feral chickens. Like seagulls in cities or rabbits in public parks, these animals thrive in semi-natural environments, making themselves right at home and presenting a multitude of challenges to their human neighbors.

If you’re strutting around Key West, odds are you’re going to run into a feral chicken or three doing the same thing. They’re everywhere, waking honeymooners with their squawking early in the morning, scratching up local gardens in the afternoon, and stealing from snowbirds’ plates at dinnertime. Their ubiquity has led to a certain cultural cachet: “They are an iconic part of Key West,” says Tom Sweets, executive director of the island city’s Wildlife Center. “You’ll see them on signs, restaurants, businesses … the tourists love them.”

As befits such a totemic animal, the Key West chicken’s origin story is a blend of fact and legend. Some people say the birds came over with early settlers, who brought them as a source of eggs and meat. The advent of supermarkets made these birds less necessary, and their former owners set them free. Others maintain that they’re descendants of fighting cocks, imported by cigar workers from Cuba starting in the 1860s, and liberated after the sport was outlawed in Florida in 1986. (The truth, Sweets says, is probably a little of both.)

Since throwing off the bonds of domesticity, these chickens have developed new skills, social structures, and lifestyles. Some of these habits are closer to that of the red junglefowl—the wild ancestor of all domestic chickens, which still roams free in the forests of India and southern China—while others are novel adaptations, inspired by their new situation.

Like red junglefowl, Key West’s feral chickens will fly into trees to escape danger, and tend to form small rooster-led social groups. “The feral population is pretty disease-resistant, and they’re pretty tough and hardy” compared to domestic chickens, says Sweets. “They have the skill to live on the street.”

This skill, combined with the island’s lack of large predators and a law against killing chickens on public property, has made for a steady supply of the birds. This can get a bit stressful. Key West’s human population is also a mix of seasoned locals and relative newcomers—and, excited tourists aside, the average person’s level of chicken tolerance tends to match the length of time they’ve been around. “Half the island loves them and half the island hates them,” says Sweets.

There are reasons for either stance. On the one hand, the chickens are colorful, funny, and great at pest control. On the other hand, the chickens poop in convertibles and pools, and ruin landscaping while scratching for worms. Snowbirds who’ve flown down for a restful winter find themselves woken up at dawn.

Chickens also cause neighborly disputes: If someone starts feeding a flock, they’re perfectly willing to go against their wide-ranging foraging instincts and hang around that person’s house every day, bothering the people next door. (Feeding chickens is technically illegal—but, Sweets says, “half the island does it anyway.”)

Currently, the Key West Code Compliance Department adjudicates individual chicken-centric conflicts between people. But over the years, the city has tried different strategies to manage the population on a wider scale. The government tried rounding them up themselves and shipping them away, but this was resource-intensive and garnered a lot of public backlash. Parra, the chicken-catcher, tried his best to do the same thing, but after chicken rights activists sabotaged his traps and further vandalized his barbershop, he quit.

So in 2011, the city tried something new: They asked the Key West Wildlife Center to help them by taking care of those birds that can’t take care of themselves. In a typical year, Sweets says, the Center takes in about 1,400 sick, injured, orphaned, or unwanted chickens, rehabilitates them, and places them somewhere off the island.

“We do it alongside our wildlife rescue operations—I guess you could say it’s a chicken rescue,” Sweets says. “We find them homes in a better area for them.” Sometimes this means a 12,000-acre free-range ranch in Okeechobee County. Other times it means a mom-and-pop egg operation, or a family who wants an unusual pet. In that last case, the chicken comes with a certificate signed by Key West’s mayor.

On the spectrum of possible chicken crackdown strategies, Key West falls solidly in the middle—not completely lenient, but not too harsh either. Other islands handle things very differently. In Bermuda, which has been covered in feral fowl since a hurricane knocked down hundreds of coops in 1987, the government hopes to straight-up eradicate the population, which they say destroys about $100,000 worth of crops per year.

Their plan involves a combination of brute force and public whistleblowing. “If you find chicken eggs, destroy them,” the Department of Environment and Natural Resources (DENR) advises on their website, which also features a giant button that says “Report a Feral Bird Problem.” There is a $3,000 penalty for letting a chicken loose in Bermuda, and the DENR uses traps, nets, and poison bait to cull the birds.

Government employees are also allowed to shoot the birds on sight—an unusual provision in a place where guns are largely forbidden, and one that, according to resident Les Center, often backfires. “Most of the employees hired to do this job are really lousy shots,” he writes. Last October, DENR took heat after what was essentially a chicken-focused drive-by shooting: Employees in a van opened fire at a small flock that was strutting along a public beach. (DENR did not respond to a request for comment.)

In Kauai—which legend has it also inherited its chicken problem from a coop-destroying hurricane—the government has taken the opposite tack. “They pretty much just leave them alone,” says Eben Gering, a biologist who studies feral chicken genetics on the island. Like in Key West, the island’s thousands of chickens enjoy legal protection on public property, but not private.

Kauians generally don’t mind them, though—“they’re like pigeons here,” Gering says—and state-sponsored efforts to manage them, including a free trap rental program, have been discontinued. For the most part, chickens on Kauai just go about their lives, eating bugs and seeds and, according to one local blogger, the occasional slice of Costco pizza.

Despite this blissful life, it’s possible that some have further-reaching plans. “Feral chickens are increasing in number on some of the other islands,” says Gering, including the Big Island, Maui, and Oahu. While it’s unclear where they’re coming from—Kauai may or may not be the culprit—the trend doesn’t show any sign of stopping.

This last scenario is Key West’s nightmare. Sweets refuses to send rehabilitated chickens anywhere that resembles where they came from—no little islands, no predator-free ecosystems. Recently, “there was a guy on an island up in the Carolinas,” he says. “He wanted to adopt them, but we refused.”

“If you release some feral chickens on an island like that, it’s going to end up just like it is in Key West,” says Sweets—a situation that, no matter how much you like it, you wouldn’t wish on someplace else.

Naturecultures is a weekly column that explores the changing relationships between humanity and wilder things. Have something you want covered (or uncovered)? Send tips to cara@atlasobscura.com.

Most Islands Don't Actually Have Palm Trees on Them

A quick and dirty calculation reveals the reality behind the stereotype.
islands

The Visual Influences Behind Wes Anderson's 'Isle of Dogs'