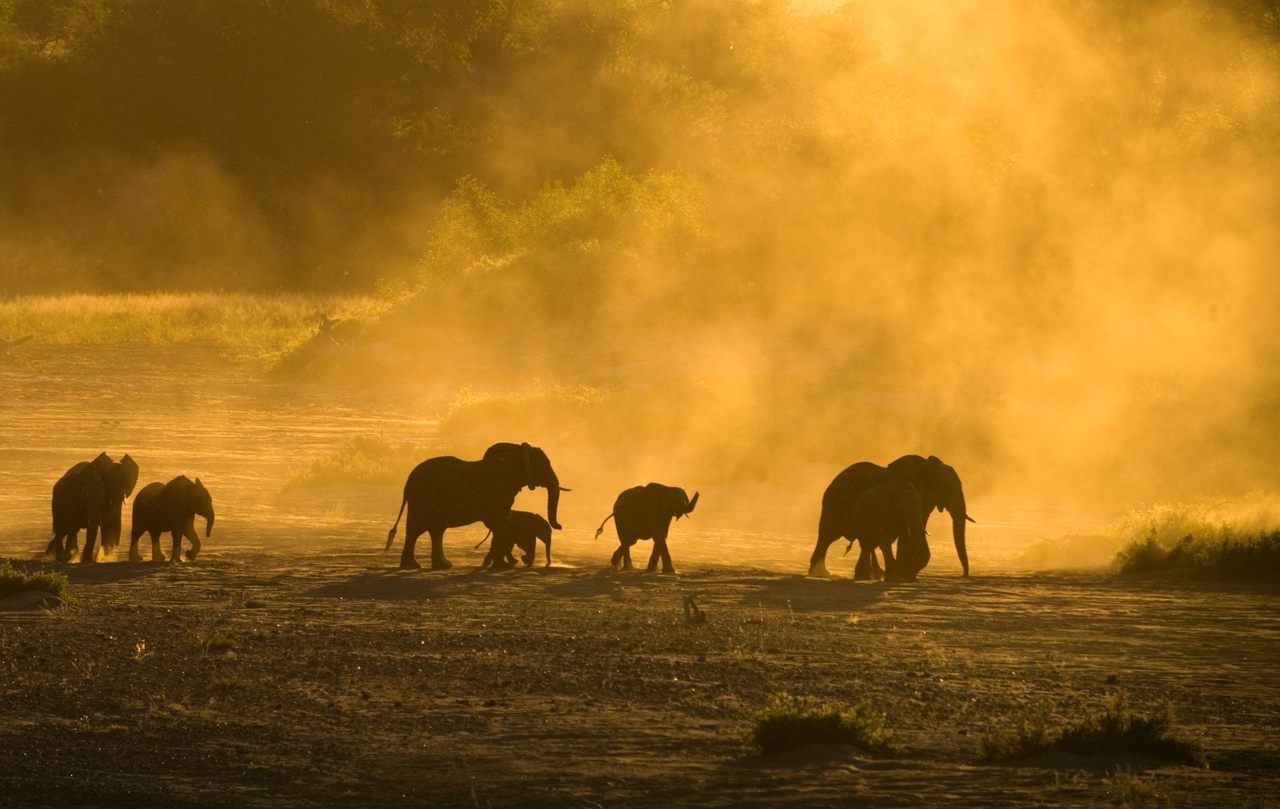 Elephants, such as these in South Africa's Kruger National Park, are highly social—and loud. Friedrich von Hörsten / Alamy
In This Story
Destination Guide

When individuals in a group of elephants have been separated, even for the briefest of moments, they get rather excited upon reuniting. “They’re sort of like dogs who’ve come back to their owners after being separated for 15 minutes. Super excited, they’re saying, ‘Where have you been, it’s so good to see you again,’” says Oliver Lamb, a geophysicist at the University of North Carolina at Chapel Hill. “They get really happy, they’re really happy to see each other again.”

It may seem a little odd that a geophysicist is describing elephant behavior, but Lamb isn’t just a fan. He’s using the tools of his trade—namely, seismometers—to see if he can listen in on these signs of joy.

Seismometers are primarily designed to detect the seismic waves emanating from temblors: earthquakes, moonquakes, marsquakes. But these little boxes of mechanical magic are so sensitive these days that they can detect rumblings made by all sorts of things, from the sounds of hurricanes and snowmelt to the thumping rhythm of humanity.

In recent years, scientists have been using them to listen to elephants, both the noises they make with their feet and their 110-decibel yawps. “The vocalizations are very loud,” says Lamb. “I don’t know if you’ve been close to elephants, but they really shake your whole body, they’re quite intense noises.” Those sounds shake the ground, too, making their own seismic noise.

There are a few reasons scientists want to do this, but chief among them is conservation: Seismometers may be an effective way to track elephants, remotely and without disturbing them.

It’s a promising idea, but Kate Evans, the founder and director of the nonprofit Elephants for Africa, says that affordability is key. High-tech seismometers can run upwards of $10,000 a pop, something that elephant monitoring efforts can’t always afford. “So much of this technology is just not applicable in the context of conservation,” she says.

So Lamb and his colleagues wanted to know if a low-cost (that’s $1,000 or lower) seismometer could have some use. He opted for Raspberry Shake and Boom devices, which can pick up on acoustic waves traveling through the atmosphere and seismic waves zipping through the ground. They have already been shown to pick up earthquakes, avalanches, rocket launches, and meteors exploding in the air, so it seemed worth a shot.

The team headed out to Adventures With Elephants, a 750-acre savannah reserve in Bela Bela, South Africa. “These elephants in particular, they’ve been rescued from situations where they could have otherwise been shot or killed,” Lamb explains. There, the team set up a series of Shake and Booms at varying distances from a group of seven African elephants, including adults and calves.

These seismometers are designed to be deployed at home. You simply plug them into the wall, hook them up to the internet, and voilà, you have your own personal quake-tracker. That set up is impossible in the wild, so the team retrofitted them with solar-powered car batteries and storage devices that could be picked up when the experiment was over.

As a first test, the objective was simply to see if the elephant vocalizations and locomotion could even be detected. The work focused on the aforementioned elephant reunions and their jubilant squeals. For the sake of comparison, more technically capable devices were also set up around the reserve.

As reported last month in the journal Frontiers in Conservation Science, it wasn’t quite as successful as the team had hoped. The quality of the vocalization signals dropped off precipitously with distance. The farthest a low-cost sensor was able to detect an elephant’s trumpeting was about 650 feet away. The drumbeat of elephant feet could be recorded within a 165-foot range.

Neither result is ideal for tracking, but tweaks can be made. The seismometers were simply placed in soil, whose the loose grains can muffle incoming seismic signals. Ideally, explains Lamb, concrete vaults would help, and they’re standard practice for seismometers: The vaults shake in response to seismic waves, essentially making them more sensitive to signals.

Refinements are needed, but experts agree that low-cost seismometers can play a role in conservation. African elephants are listed as “vulnerable” on the IUCN Red List of Threatened Species, and “endangered” in some regions. According to Vicky Boult, a postdoctoral researcher at the University of Reading not involved with the work, who has studied African elephants for nearly a decade, both climate change and human-wildlife conflict are pressing concerns. “It’s a growing problem in Africa, because we’re seeing human populations expand into natural landscapes,” she says, which can lead to clashes that can be deadly on both sides.

Lamb’s low-cost seismometers could give rural communities a cost-effective alert system for when elephants are heading toward their homes or farms. The cheap, easily set up devices could be placed around known elephant gathering sites nearby, such as watering holes, and set to “send out an early warning message via SMS to the farmers in the area,” says Evans, who also was not involved in the project. This would allow the opportunity to avoid the elephants or deploy a nonviolent deterrent. Evans suggests “burning chili with dried dung”—an all-natural tear gas that the elephants would seek to avoid.

When the pandemic ends and travel restrictions are lifted, Lamb hopes to conduct more tests with low-cost seismometers to see if they might be helpful in tracking elephants as they move across the landscape, and even deciphering their long-distance communication.

Elephants are often tagged with GPS collars, “but they can be quite stressful for elephants. You have to go up to them, tranquilize them, separate them from the herd,” says Lamb. The collars can also sometimes irritate the elephant’s skin if not fitted properly. Seismometers could, in some places, remove the need for them.

Prior work has revealed that elephant vocalizations are remarkably complex symphonies packed with information that helps elephants coordinate their movements, notify others of their moods and reproductive states, and distinguish friends from strangers. And they don’t just use their ears. Their feet pick up on the seismic waves made by other herds. Lamb and his colleagues hope they can use seismometers to unravel this advanced form of long-distance communication. Machine learning algorithms could even be deployed to differentiate between various elephants’ signature rumblings. Seismometers could, in theory, autonomously identify individuals within herds.

It’s still very early days, but this technology could take a place alongside GPS, drones, satellites, and staff as “another tool to add to the toolkit” of conservationists, says Boult. And they’ve already given scientists not usually seen studying living things a newfound appreciation for wildlife biology.

“They’re incredibly gentle animals. They have a presence that I never realized before, one you don’t get from places like zoos,” says Lamb. “They’re amazing animals.”

Invasive predators and other threats have pushed the Key Largo woodrat to the brink. A small but passionate group of scientists and volunteers is pushing back.
animals