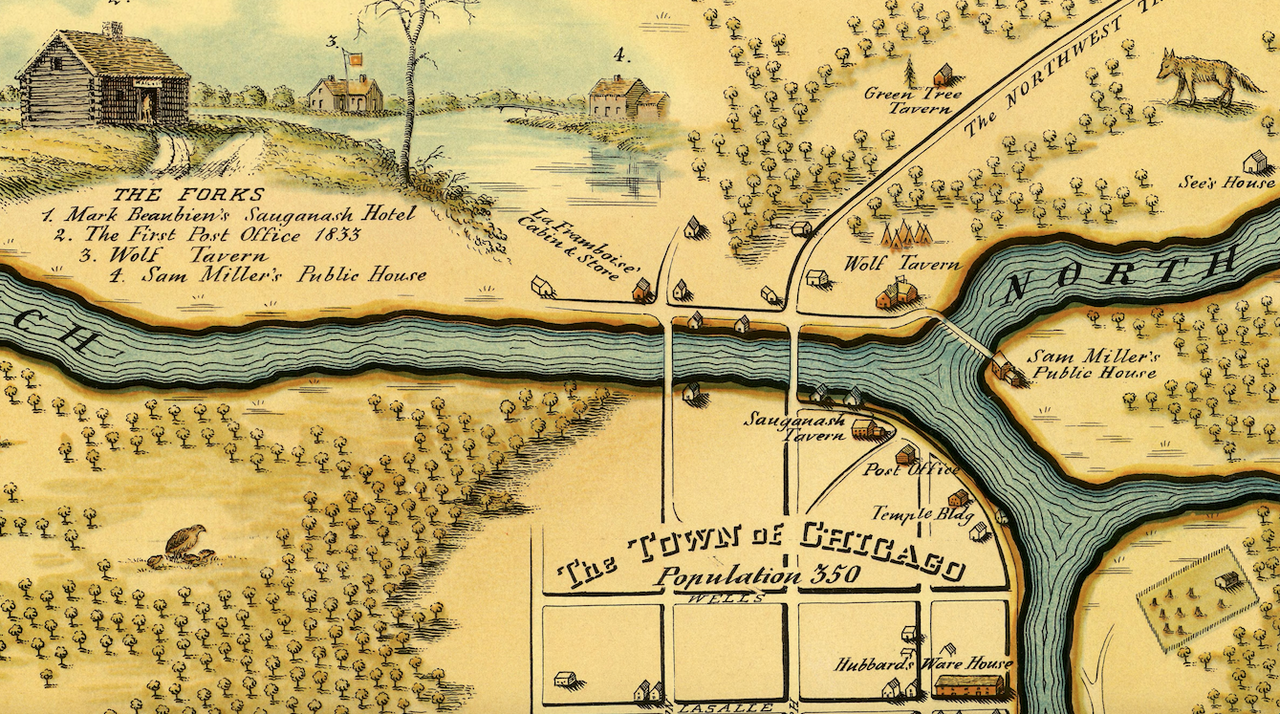 The map is richly detailed—and a little whimsical too. David Rumsey Map Collection/Public Domain
In This Story
Destination Guide

It was December 1833, and the Reverend J. M. Peck was feeling pretty good about Chicago. In a letter to John Reynolds, the then-governor of Illinois, Peck marveled at the not-quite metropolis. His note, printed in New York’s Evening Post to inform and delight Easterners “who wish to hear from the ‘far West,’” detailed how Chicago was spreading its wings.

Buildings were sprouting up left and right, Peck reported. Seventy schooners and two steamboats had docked between April and September. The population was climbing. And there were 30 stores “and plenty of mechanics” to cater to residents’ needs. Eventually, Peck predicted, “Chicago is destined to outstrip every other town in the State.” It was a bold forecast, given that Chicago had been incorporated as a town only a few months before.

A hundred years later, in 1933, a pictorial map was drawn to revisit those earlier days—when Chicago’s population was roughly 350—and highlight some scenes from 19th-century life. An 86-year-old print of the illustration is currently for sale through Geographicus Rare Antique Maps.

The 1933 map drew upon sources from 1833, plus 20th-century research by one Walter H. Conley, an architect and draftsman who is said to have spent two years sifting through local libraries and archives to bring the cartographic scene to life. Conley owed a great debt to Caroline McIlvaine too—a librarian, cataloguer, and researcher whose career included stints at the Newberry library and the Chicago Historical Society. The map’s caption notes that, in the early 1900s, McIlvaine had compiled recollections from locals who’d been alive in the previous century, then later worked with Conley to fold those historical details into this finished product.

The vignettes, illustrated by O. E. Stelzer (sometimes written as “D. E. Stelzer” in contemporary accounts), include watering holes, public works, and depictions of the Native Americans who called the area home. Long before white settlers landed here, this was the land of the Algonquian peoples.

Explore the map, and you’ll find some notable sites—like the home of Billy Caldwell. Also known as Sauganash, he was a fur trader of British and Potawatomi descent who negotiated treaties between the United States and Native communities.

You’ll also see the Sauganash Hotel, a lodge that worked overtime as a meeting space and performance hall, plus a post office, taverns, schools, and the site of the second Fort Dearborn. (The original was destroyed in the War of 1812. Its replacement, which went up four years later, was decommissioned by the middle of the 19th century, and it soon vanished too.)

The illustration is bisected by the wriggling, rippling Chicago River, spanned by a drawbridge and flowing into Lake Michigan. Around the turn of the century, engineers would reverse the river’s flow in the name of public health, diverting the waste-strewn water from the lake, where, according to the American Society of Civil Engineers, it was sullying the city’s water supply and contributing to outbreaks of typhoid and other diseases.

Toward the left-hand side of the illustration, there’s another winding path—not water, but earth—and a carriage setting out on the “Road to Detroit.” An annotation notes that mail rolled in once a week from Niles, Michigan.

A reproduction of this map ran in the Chicago Tribune in the summer of 1933, coinciding with the World’s Fair known as “A Century of Progress.” McIlvaine and Conley autographed copies of the map on the second floor of Marshall Field & Company; the famed department store sold prints of it for 50 cents a pop, or $2.25 for a version framed in “toned maple.” At the time, the map may have been a nostalgic gesture—a way of meditating, in the midst of a fair celebrating growth and innovation, on the changes that the city had witnessed in its own backyard.

Of course, a lot has changed since Chicago’s first wave of urbanization. The town would be incorporated as a city four years later, in 1837, and many aspects of the map would be unrecognizable to a visitor wandering around today: In the urban core, for instance, you’ll no longer find “dense forest” roamed by deer, or shores where beavers waddle and wade (though many furry, scaly, and feathery residents live inside the Lincoln Park Zoo).

But now that nearly another century has passed, the map offers a chance to hunt for Easter eggs still hiding around the city’s grid and shores. Several of the street names on the map—Lake, Randolph, Washington, and Madison reaching east and west; State, Dearborn, Clark, LaSalle, and Wells reaching north and south—still appear in the present-day Loop, though they’ve since been flanked by many other streets.

Next time you’re in Chicago, look closely as you wander the skyscrapers and bridge around Michigan Avenue and Wacker Drive: You’ll see a smattering of plaques commemorating Fort Dearborn. The river’s flow has changed, but the water is still there, snaking below buildings and sidewalks teeming with tourists.

Now flick your eyes between the map and the modern-day streets, and you might just be able to imagine yourself meandering three centuries at once.

23 Ceilings Worth Craning Your Neck For

And how instability, climate, and neglect drove their slow collapse.
architecture

It all goes back to a rather literal reading of some rather vague instructions in the Constitution.
medicine

The history of unpleasant odor, or miasma, has unexpected relevance in the time of COVID-19.
maps

Learning About Cities by Mapping Their Smells

The U.K. artist Kate McLean is trying to preserve our olfactory memory.
Video