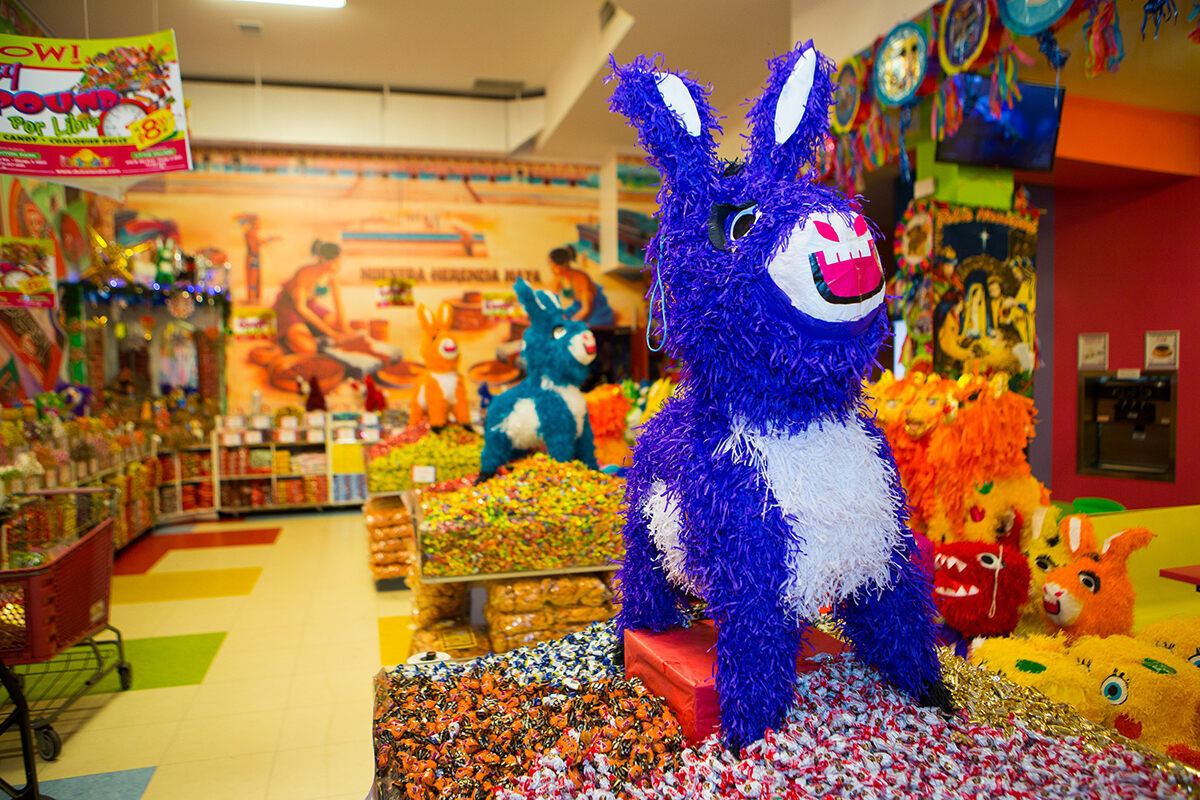 Inside the 4,000 sq-foot Dulcelandia. Jose Gomez
In This Story
Destination Guide

Drive west down 26th Street, past California Avenue, in Chicago, and you’ll see the first signs that you’re nearing the neighborhood known as Little Village: the various vendors lining up on the street to sell freshly made fruit juices, chips, and tamales. Continue driving and not long after, a sign hanging from a giant arch welcomes you to the predominantly Mexican neighborhood. From there, a four-minute walk away, sits Dulcelandia, a 4,000-square-foot store selling piñatas and the Mexican candies used to fill them.

Dulcelandia, which translates to “candyland” in English, was founded in 1995 by Eduardo Rodriguez, a Mexican immigrant. There are four locations across Chicago and the flagship store in Little Village is the biggest. “All of our piñatas are hand-made in Mexico,” says Rodriguez in Spanish. “The candies actually came first. When NAFTA passed, I saw an opportunity to fill a void in the marketplace for people with nostalgia for Mexico.” A year later, the piñatas followed.

According to Jaime di Paulo, executive director of the Little Village Chamber of Commerce, Rodriguez’s store is the biggest importer of piñatas to the Midwest. Every two weeks during the year, Dulcelandia imports 1,500 piñatas from Mexico, says Marco Rodriguez, vice president of operations, and the youngest family member. However, as December and posada season approaches, the store orders 2,500 every two weeks.

Posadas is Spanish for “shelter” or “lodging.” Las Posadas is a nine-day Catholic festival tied to the nativity story of Jesus. In Mexico, families gather each night to re-enact the biblical story of Mary and Joseph’s journey to Bethlehem, and their struggle to find shelter. The group begins in one location and carols their way to another, with guests dressing up as Mary and Joseph or as shepherds. Each night a different person or family plays host.

Upon their arrival at the host’s home, the traveling group sings “La Cancion Para Pedir Posada,” or “the song requesting lodging.” The host represents “the innkeeper,” who rejects the group’s bid for shelter two or three times before finally opening the doors and allowing everyone in.

Then the celebration begins. Posada gatherings vary from casual potluck to elaborate dinner parties, and always culminate with a piñata breaking for the children. The festivities, a centuries-old tradition, begin December 16 and end on Christmas Eve. The frequency of these parties is one of the reasons the piñatas are in high-demand in December.

The piñata’s association with the religious holiday is related to its traditional star-shaped design, says Pastor Matthew Nathan of Saint Alexis Catholic Church in Bensenville, Illinois. “The seven horns on the piñata represent the seven deadly sins, which need to be conquered,” explains Nathan. The blindfold worn by the person taking a swing at the piñata represents faith, whereas the stick is symbolic of that person’s desire to overcome temptation. From there “the candy that flows out is the grace of God,” says Nathan.

“All the piñatas are hand-made in Mexico,” says Rodriguez. But the options at Dulcelandia go far beyond the rounded star. You’ll find some other traditional shapes, including horses, lions, and donkeys, but also expect to stumble upon emojis, Lucha Libre wrestlers, and knock-off movie characters.

Customers will also find an array of candies to go inside the piñatas.

Traditional Mexican candies such as Duvalin, mazapan, and Pulparindo are found in abundance. However, when customers purchased piñatas but left without candy, Marco asked questions. He discovered not everyone was familiar with the umami flavor of chamoy (a pickled fruit such as apricot, plum, or mango) or Vero Paleta Elote (a sweet lollipop covered in salty and spicy seasoning) and as a result, they were less likely to purchase the Mexican offerings. This led to partnerships with Hershey’s and Tootsie Roll.

“I love seeing these two different products sitting alongside one another,” says Eve Rodriguez Montoya, vice president of brand strategy and Rodriguez’s third child (who joined the family business along with her brother Marco in 2016). “It’s symbolic of the mixing of two cultures and representative of what we see in the world today.”

Her brother agrees. Piñatas, he says, have “always been popular among Mexican and Mexican-American families, but today, we’re seeing customers in places we wouldn’t expect. We’ve fulfilled orders in Alabama, Alaska, and Mississippi. The reach of Mexican culture is growing.”

The work is for the 90th anniversary in 2021, but the real party is still a decade away.
islands

Research reveals the lush islets have been a setting for royal relaxation, political negotiations, and ritual fattening.
Video