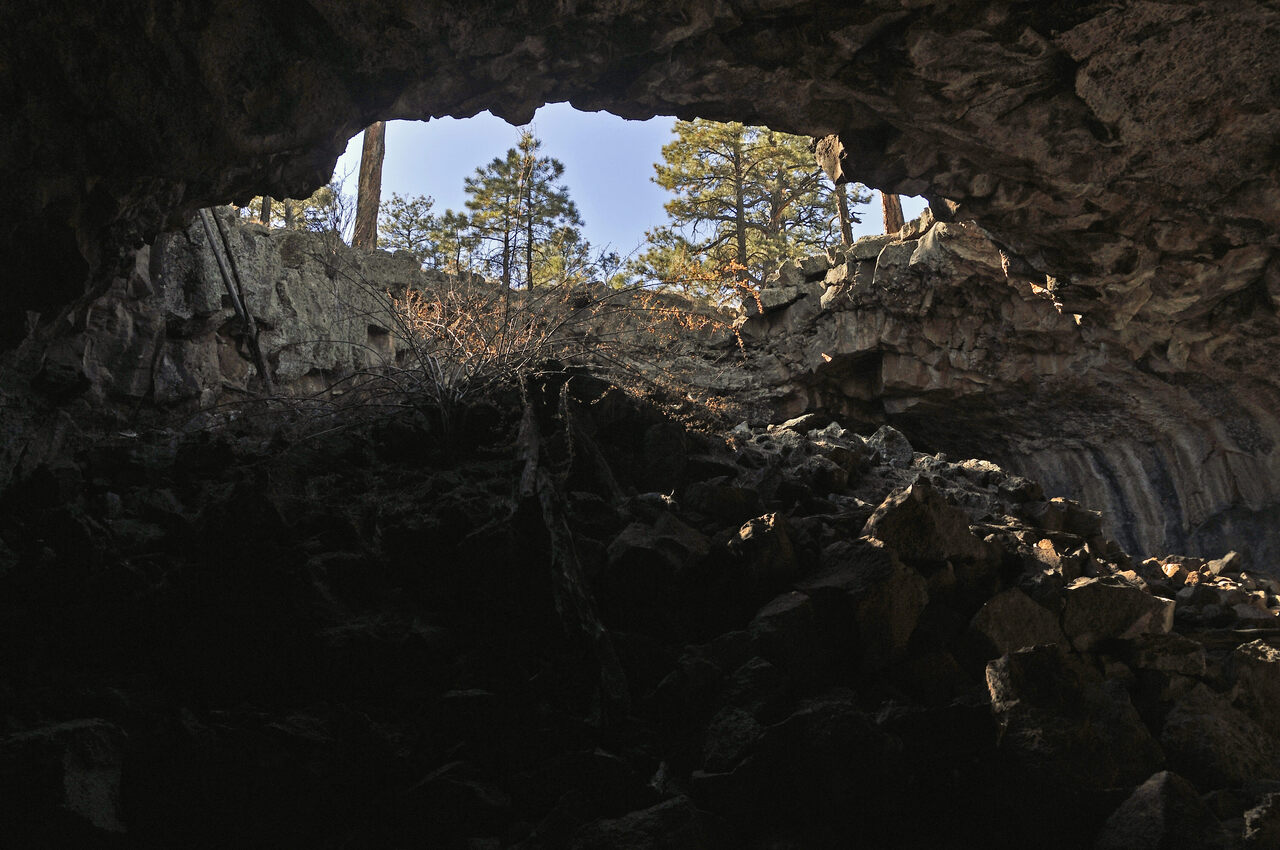 El Malpais's topography is pockmarked with the cavernous openings of lava tubes, which shuttled the liquid rock thousands of years ago. National Park Service / Public Domain

Recently, one of those tubes gave up a secret, tucked away in ice nearly 50 feet underground, a mile and a half above sea level. The mystery was how ancestral Puebloans survived droughts, and it was solved in an ice core about two feet long.

A team including an archaeologist and climate scientists from the National Park Service, which manages the monument, was inspecting an ice deposit at the end of a lava tube to better understand the ancient climate. The research, funded by the National Science Foundation, National Park Service, and the Western Park Association, sought to unpack any secrets in the ice block, which has been melting at an alarming clip in recent years. In that process, the team came across evidence of past perseverance by local peoples to endure their own climate crises.

“Once we got [the core] out, we started seeing these dark areas,” says Bogdan Onac, a geoscientist at the University of South Florida and lead author of a recent paper describing the finds published in the open-access journal Scientific Reports. “I said, ‘Wait a minute. Something is going on—why is it black here?’”

The discolorations in the ice turned out to be soot and charcoal, residue from a fire Onac’s team suspects was lit to melt the ice block, dislodging freshwater to help the Puebloans get by. The dark marks occurred in different bands throughout the ice, and once they were radiocarbon dated, corresponded with five known droughts between the years 167 and 933. Onac says the residue couldn’t be from old wildfires in the area, as the bits of charcoal around the ice were large, ranging from the size of pencil erasers to entire charred branches—too big to be ushered into the back of the cave by surface water.

Ice develops deep in some lava tubes when cool air inside the cave isn’t dislodged by warmer air from the surface. (Remember, warm air rises.) Temperatures deep in the lava tubes, once piping hot, now hover around freezing. The people who set the fires ordinarily lived in pithouse villages or small pueblos in the arid environs, according to Steve Baumann, the archaeologist for El Malpais, but they entered the chilly lava tubes to melt ice for drinking.

Onac’s team estimates that the ice block, currently somewhere 30 and 50 cubic meters in size, was once 1,000 cubic meters. Though the lava tube’s ice block has survived for at least two millennia, its melting has accelerated in recent decades. The ice where the charcoal deposits were frozen in time would have been inaccessible but for the stress climate change has put on the deposit.

Further evidence of the ancestral Puebloans’ use of the cave was in a potsherd of Cibola ceramic Onac’s team found nearby—perhaps once a vessel to collect the meltwater. For Barbara Mills, an anthropological archaeologist at the University of Arizona and an expert in sites from the North American Southwest, the pottery’s presence bolsters that conclusion. To boot, charcoal residue on the inside of the shard lined up with known dates for that style of ceramic. “I find the research to be very good—and definitely plausible,” Mills writes in an email. “There is evidence for small fires inside the cave in the dark zone, which along with the artifacts and radiocarbon dates shows that this was not just a single event.”

What remains to be seen, Mills adds, is if similar fires were set in ice deposits in other lava tubes under the monument. If such evidence were found, it would show that the resourceful behavior was more widespread than just one cave. With social distancing restrictions still in place due to the coronavirus pandemic, further archaeological fieldwork is on hold. But though the lava tube is now cold, the trail is hot.

Some of them are comparable in size to the famous Nazca Lines in Peru.
caves

In the Driftless, a rare combination of geological quirks has preserved ancient ecosystems. But climate change is coming.
volcanoes

At the time, unrest roiled Egypt and an empire rose in Rome.
volcanoes

It may have even helped bring on the bubonic plague.
Video • PinDrop

5:11
Want to see fewer ads? Become a Member.
From Around the Web
Travel With Atlas Obscura
Are you a curious traveler?
Join local experts in 50+ destinations for a once-in-a-lifetime journey.
View Our Trips
Thanks for sharing!