Dolphins Help Those Who've Helped Them Before, Even When They're Not Friends - Atlas Obscura
Want to see fewer ads? Become a Member. 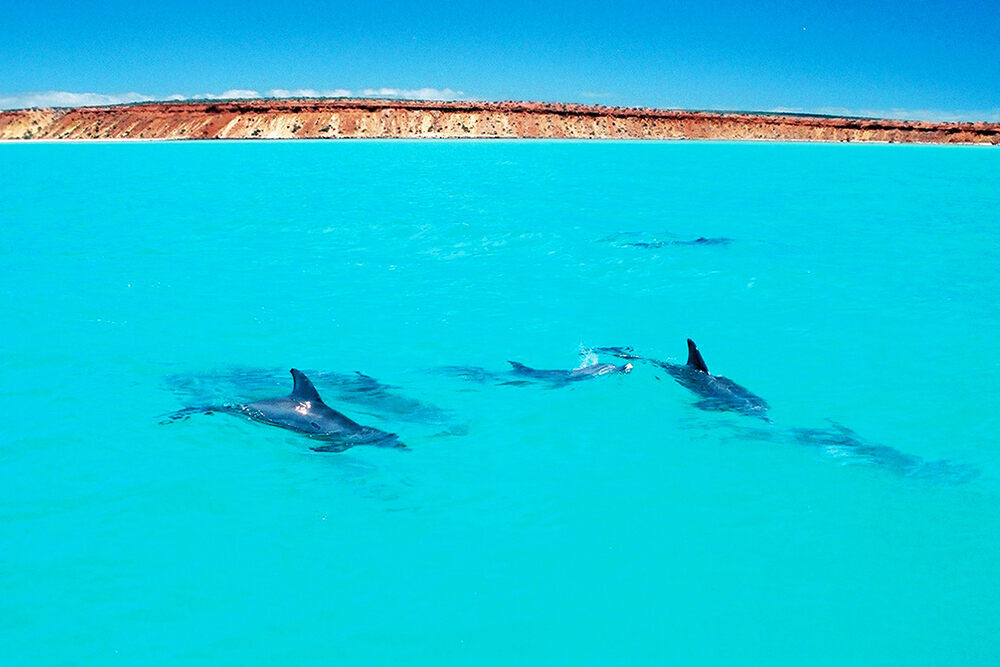 When it comes to teamwork, bottlenose dolphins have some pretty sophisticated social sensibilities. They interact with a wide network of individuals and form different kinds of groups. Scientists delving into the nature of this complicated social sphere have looked recently at how individual dolphins choose and recognize members of their most strategic alliances.

The research, on a population in Shark Bay, a UNESCO World Heritage Site off the westernmost point of Australia, shows that when male dolphins need or offer help corraling a female, they rely less on bonds of friendship and more on their memories of past cooperation. The findings, published in Nature Communications, offer insight into how the dolphins juggle social relationships, all with the goal of ensuring reproductive success.

And that’s a crucial skill in Shark Bay, where females generally produce a calf every four to five years, and calf mortality is high due to predation, says Stephanie King, a behavioral biologist at the University of Bristol, and lead author of the study.

“Our work has shown that it’s not the strength of your friendship that’s important, but whether you’re a member of the cooperative team,” she says. “The dolphins keep track of who’s helped them out in the past.”

Such behavior is uncommon in other social animals, and indicates that dolphins can recognize members of their team by forming conceptual associations based on reciprocal payoffs. According to the study, which also involved the universities of Western Australia, Massachusetts, and Zurich, this type of abstract concept learning was likely significant in the cooperative behavior of early humans.

Relationships among dolphins start early in life. The recent study builds upon several decades of research on the Indo-Pacific dolphins in Shark Bay, an area known for its large population of dugongs, rich and expansive seagrass beds, and stromatolites, layers of microbial mats that are one of Earth’s oldest life forms.

Bottlenose males typically live into their 40s. “Many of these males we’ve known since they were born—whom they’ve associated with, fought and cooperated with, whom they’re related to, and which calves they sired,” says King. “It’s a really powerful data set.”

Over time, these males form layered alliances. Pairs or trios of dolphins make up first-order groups, which then cooperate as second-order teams that include up to 14 individuals. (In the third order, multiple teams work together.) When chasing and defending females, males rely primarily on their second-order allies, regardless of whether friendship bonds are strong or present at all, the study found.

To determine how the dolphins respond to other males, researchers played recordings of individual whistles—sounds that identify a dolphin like a name—to 14 males. Video captured by drones allowed the scientists to observe their reactions to the sounds, such as shifts in body orientation, duration of responses, and how far the dolphins swam toward the source of the whistle.

Surprisingly, being close friends didn’t drive the strength of their responses. The males responded strongly to their larger squad, the second-order alliances, regardless of how much time they had spent together. Members of the third order received weaker responses.

“What was so striking about these results was how strongly they responded to the whistles of second-order allies—turning back immediately toward us and approaching and sometimes whistling,” as if checking to see whether they were needed, says King.

Second-order alliances can be stable over decades and involve social reciprocity, an “important evolutionary driver of cooperation among non-kin,” the study notes. Even so, the cooperative behavior doesn’t extend to other situations. “When foraging, the dolphins spread out on their own, so these alliances are all about the females,” King says, adding that males that don’t join an alliance fail to reproduce.

In terms of social strategy, it’s quite remarkable. “In dolphin society, it’s similar to humans in that you have this open social network. Like us, all individuals interact—we have our families, best friends, acquaintances, work colleagues,” says King. “We use social concepts to classify relationships, and it appears that they do, too.”

And that's bad news for the snails that produced them.
dolphins

Researchers are hoping to use the opportunity to get a better handle on their language.
animals

The animals face threats from climate change, fishing, and a tourism boom, but their biggest advocate remains hopeful.
animals

When Usually Solitary Octopuses Get Together, Odd Things Happen

Observations from Octopolis and Octlantis.
Read more
Thanks for sharing!