Rasputin Was Poisoned, Shot, Beaten, and Drowned. But Did His Penis Survive? - Atlas Obscura
Want to see fewer ads? Become a Member. 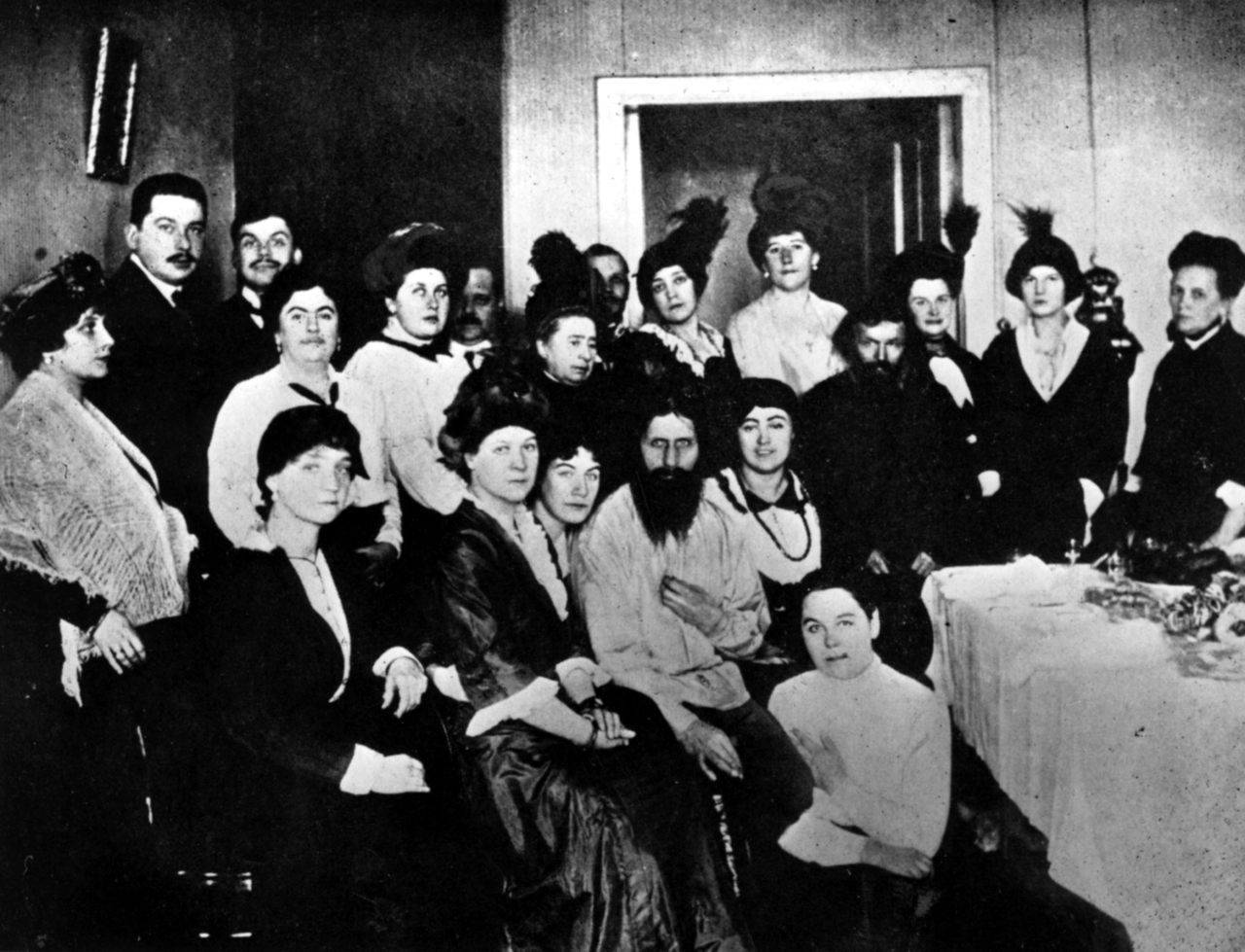 Rasputin surrounded by admirers in 1914. Hulton Archive/Getty Images
In This Story
Place

Palace where the nearly un-killable Rasputin was murdered.

Gregori Rasputin, the legendary Russian mystic and influential advisor to Czar Nicholas II of Russia in the early 1900s, was famous for many things: his magnetic sway over some of St. Petersburg’s most powerful aristocrats, the level of resentment he stirred in nearly everyone else, and his apparent healing powers.

And then, of course, there were his sexual escapades.

Rasputin practiced an unusual—but convenient, it seems—form of Christianity that married traditional Christian rituals with licentious sexual practices. He allegedly took noblewoman such as Czarina Alexandra, Nicholas II’s wife, and the Empress herself as lovers. And his exploits have been a crucial part of his legacy: thanks to the Museum of Russian Erotica, the legendary lover’s alleged 13-inch member still pleases the thousands of people who come to visit it every year in a small museum in downtown St. Petersburg.

Cultural obsessions with famous male genitalia are not new: Hitler’s penis was supposedly bequeathed to his son, Ivan, after his death, by the Russian army, but there are conflicting accounts as to where it is now. Infamous gangster John Dillinger’s parts are supposedly housed in the walls of the Smithsonian (although they claim no such artifact in their archives).

Even Napoleon Bonaparte’s “parts,” which, sadly, are rather small at only 1.5 inches, and often compared to a “shriveled sea-horse,” are housed here in the United States and belong to a man named Evan Lattimer, who most recently bought the package for $3,000 in 1977 at a French auction.

The Museum of Russia Erotica’s founder, Igor Knyazkin, takes particular pride in the fact that this specimen, which is of dubious origin, is larger than the one attributed to the French emperor. By having this exhibit, says Knyazkin, who is also the chief of prostate research at the Russian Academy of Natural Sciences, “we can stop envying America, where Napoleon Bonaparte’s penis is now kept…it cannot stand comparison to our organ of 30 centimeters.”

Clearly, when it comes to one-upping each other in museum exhibitions, size does matter.

The front of the Museum of Russian Erotica—which has only been open since 2005—is unassuming and a little honky-tonk: above the door, blinking signs in both Russian and English announce that you’ve found the right storefront. Next to the black-painted door is a sign that clearly states “18+” and a sticker of a winking matroyshka doll in long blonde braids wearing nothing but a black bra, panties, and thigh-high stockings. It’s not the only time you’ll see her—when you walk into the museum, there are plenty of life-sized blow-up versions of her to welcome you.

The museum has four main rooms, full of sexual pleasure devices, mannequins in compromising positions, and black-and-white archival photographs of historic Russian pornography. There were only two people in the entire museum—two men who were, presumably, by themselves.

It is surprisingly difficult to find the Rasputin display; it is not given pride of place, like the black straps, masks, and studded leather paraphernalia in their own separate room.

Looking for it, I wandered around aimlessly before heading to the the gift shop (which looks like a run-of-the-mill sex shop). There, I typed “Where is Rasputin?” into my Google Translate app, thrust my phone toward the woman working the register, and waited for her to help me. She was all smiles and beckoned for me to follow her through another turnstile into a private back chamber.

There, an entire room dedicated to the mystery of Rasputin’s death and dismemberment awaited me.

When it comes to severed penises, though, the story is often cloudy. According to accounts, Gregori Rasputin was assassinated in 1916, although his death, too, lies shrouded in mystery: some believe the influential advisor and healer was served cakes and wine laced with a compound similar to arsenic (others say cyanide) by Prince Felix Yusupov, a flamboyant aristocrat who saw Rasputin as an enemy.

Then, after he was poisoned, he was then shot multiple times by Yusupov’s conspirators, clubbed when neither the poison nor the bullet wounds served to dispatch him, and then drowned—or dumped—into the River Nevka. At some point that night, the rumor goes, he was mutilated, too.

A maid is said to have found the mad monk’s penis the next day, and squirreled it away for safekeeping. Another version has a former paramour nabbing it after the autopsy. (Why either of them may have wanted to save the body part remains unclear.) By the 1920s, however, a group of Russian émigré women in Paris were said to have gained possession of an item they believed was Rasputin’s penis, and began venerating it.

Rasputin photographed in 1916, the year of his death. (Photo: Public Domain/WikiCommons)

The relic may have been kept in a wooden casket, and legend has it that bits of it were broken off and given to disciples. Rasputin’s daughter, Maria, reportedly heard about the cult, expressed her disapproval in strong terms, and took possession of whatever it was they were worshipping. Naturally, there is no solid evidence to support any of this.

For a blissful half-century, there was little to no news of the macabre Russian Revolution-era keepsake. But then, in 1994, an American collector named Michael Augustine arrived on the scene with a red velvet pouch containing, he alleged, the mystic’s missing member. He claimed to have acquired it at a storage locker sale in California, tucked in between manuscripts by Marie Rasputin.

Tests later showed that the item “discovered” by Augustine was really a dehydrated sea cucumber.

For his part, Igor Knyazkin claims that the specimen in the Museum of Russia Erotica is different than the one that turned out to be a desiccated marine animal. He has never said how it was acquired.

Visitors to the Rasputin room of the museum are greeted by a life-sized figure of a darkly bearded man; behind him, there is a five-foot tall glass case with a round red curtain obscuring something inside. Around the perimeter of the room are a number of props and plaques.

Since all the signs are in Russian, my nice friend from the gift shop helped me figure out—by typing “clue” on her own Google Translate app—that the room is broken up into stations, with each stop being a “clue” to figuring out what really happened to the poor man.

One station looks a lot like Rasputin’s bedroom with a bed, a curtain, and a side table, and when you walk past it, an old-style telephone rings. When you pick it up, the voice—who is supposedly Rasputin himself—mumbles out a clue to his untimely demise. Another is a table full of tinctures and concoctions, and presumably the idea is to choose the one potion that most likely poisoned him. By the time you’ve made it around the entire room, you’re asked to push one of three possible buttons on the wall, and only one of them reveals the subject of this article.

Bess Lovejoy, who wrote a book about famous corpses, described it vividly in an interview: “It looks more like a horse penis,” she admitted.

But, like anything that straddles the line between reality and fantasy, whether or not the object floating in formaldehyde in a tiny museum in St. Petersburg was ever affixed between Mr. Rasputin’s legs seems to matter little once you’re actually standing in front of the theatrical red curtain in the middle of the room, trying to figure out which button to push so that the curtains will part.

When you finally figure it out, the payoff, shall we say, is huge.

On Tour with The War on Drugs: Rochester's Church of Gear

The World Needs a Vagina Museum

One woman in London is dedicated to starting the world's first physical space wholly dedicated to vaginas.
anatomy museums

Notes from the Field: Museé Fragonard

Investigating a renowned scientist's iconic digit.
Want to see fewer ads? Become a Member.
From Around the Web
THE GASTRO OBSCURA BOOK
Taste the World!
An eye-opening journey through the history, culture, and places of the culinary world. Order Now