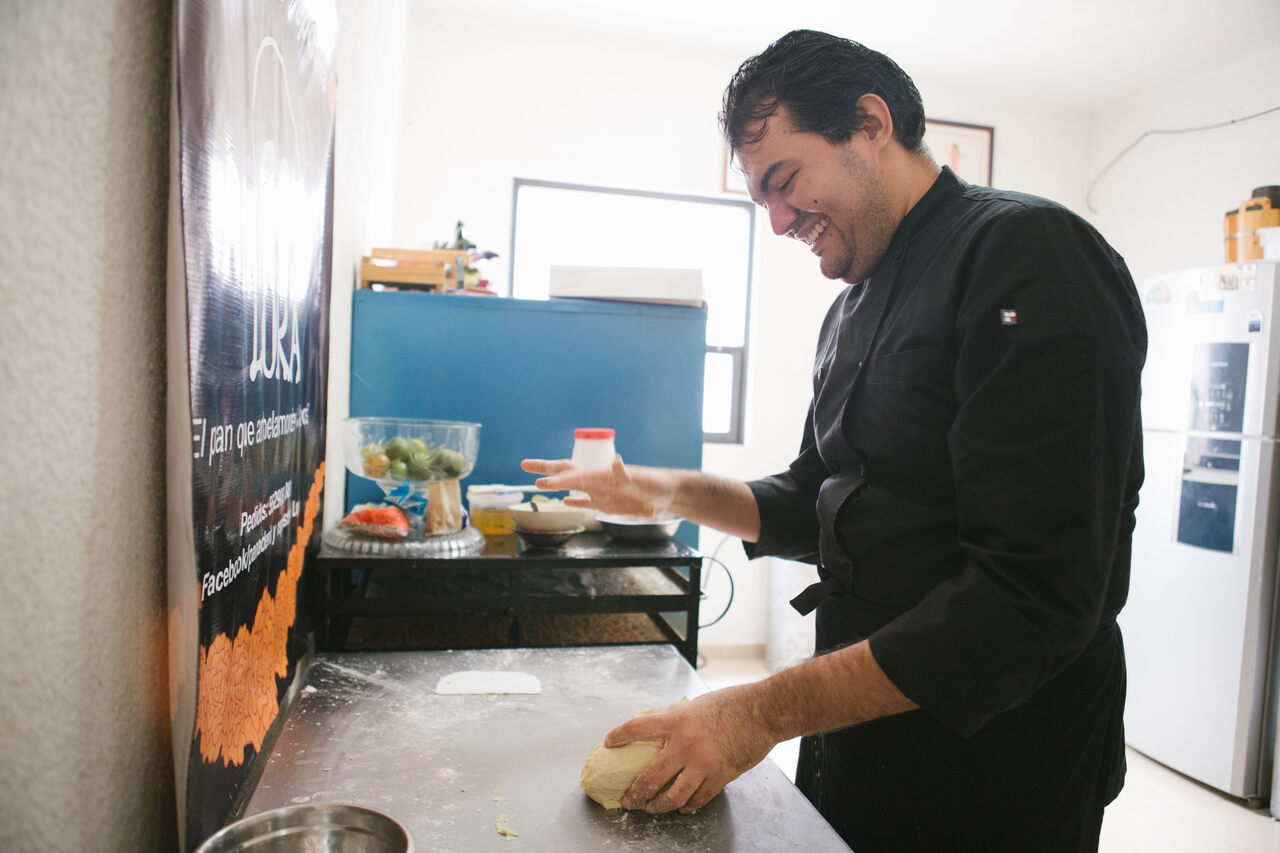 We’re working with Chase Sapphire® to tell stories about experiences in places near, far, and-in-between, like this one in Mexico City.

For the millions of Mexicans who celebrate Día de los Muertos across the country and abroad, the sweet breads, rolls and treats placed on altars during the holiday are an important way of honoring their loved ones. This annual celebration, beginning on November 1 and continuing through November 2, is a festive, joyful remembrance of those who have passed. During this time, Mexicans believe the deceased return home, so they leave ofrendas, or offerings, such as lush bouquets of flowers and pastries as gifts. A particular sweet, brightly decorated baked treat known as pan de muerto (bread of the dead) is an essential component of the ritual.

During the festival, people from all over the world descend on on Mexico City for a glimpse–and a taste–of the vibrant celebration. Though Día de los Muertos is celebrated all over the country, Mexico City has hosted a popular parade since 2016 that runs from the Angel of Independence monument to Zócalo in the historic center of Mexico City. Visitors can also experience a slew of cultural events around the city, including a “mega-ofrenda” at the local university and the colorful Festival de las Calaveras.

Travelers should also make a point to visit one of the city’s hundreds of panaderías, or bakeries, to watch as the shops come alive as they boost production of their delectable offerings.

Oliverio Xicotencatl is particularly familiar with the sweet rush of making pan de muerto. As the owner and baker of the popular Panadería y Repostelería Lorá, which he operates from his home in Mexico City’s Los Alamos neighborhood, Día de los Muertos is one of his busiest times of the year.

He talks with Atlas Obscura—who will be taking travelers on their own culinary adventure next year—about how love inspired him to open a business, the importance of bread during Día de los Muertos, and what it takes to prepare pan de muerto.

This interview was originally conducted in Spanish, and translated into English.

Día de los Muertos is an encounter between life and death. For other cultures, death is something that people fear and prepare for. In Mexico, it’s a party. We know that we have to meet death at some point, and instead of fearing it and being scared, we celebrate it. We even mock death, with sugar skulls, and the fact that we dress up for the holiday. It’s a party.

What does bread have to do with the holiday?

The holiday has pre-Hispanic origins. After the Spanish arrived, they incorporated Aztec traditions into their culture. One way this was done was by incorporating a bread into their diet made of wheat, decorated with sugar, and painted red or pink, symbolizing ancient, sacrificial rituals. They served this bread on the Christian holiday of All Saint’s Day, which takes place on November 1.

And that bread is what’s now known as pan de muerto?

Yes. There are many varieties of pan de muerto in Mexico now. The state of Oaxaca has the most. Here, in central Mexico, we have the traditional pan de muerto, which is a round sweet bread designed with what looks like crossbones at the center. There’s also a round portion of the bread that signifies the circle of life and death. The ball at the center represents the skull of the dead, and the four pieces at the sides signify the bones of the dead or the tears that are shed in honoring them.

In other parts of the country, this bread is shaped into skulls, skeletons, or animals. These are all pan de muerto; the only thing that sometimes differs is the dough. Sometimes it’s pan de yema, a type of egg bread with cinnamon. The traditional dough we make here is with flor de azahar, or orange blossom.

How do you make pan de muerto?

To make the best bread, it takes at least one day of preparation. The dough is prepared one night before, left to rest overnight, and then shaped and baked. It’s a long process, but it’s necessary to ensure the best quality.

How does your bakery prepare for the holiday?

We’ve already begun testing the recipe for this year. The season for pan de muerto is from the end of September to the middle of November. This is the time frame that we make the bread. So we’ve already begun refining our recipe. Based on last year’s recipe, we’re trying to see what we can improve or if the measurements need to change. So we’re already starting, and we’ll begin taking orders in mid-September.

We usually have about 25 to 30 orders a week during the season, but when we go to events and markets [like Mexico City’s well-known Festival del Pan de Muerto y la Calaverita, which hosts dozens of artisanal bakeries], we’ll sell between 600 and 1,200 pieces of bread.

Do families eat all of the bread, or leave some of it as part of the ofrenda?

Part of it is eaten and part of it is left as an offering. As part of the offering, bread should be left to nourish the dead. So people always leave a few pieces of bread on their altars so the spirits can arrive and eat. They take the essence of the bread with them.

When we were little, we were told that after the dead arrived and ate and drank what they needed, that the bread that remained tasted differently.

What’s your favorite part of working at a bakery this time of year?

The smell of freshly baked bread. When it’s right out of the oven, pan de muerto has such a delicious smell because of the orange and the other spices. When you open the oven, the aroma hits you, and it lingers all night and day.

How did you become a chef?

It sounds trite, but it came out of love. In college, I met someone who loved bread more than any other food in the world, but she was constantly frustrated that breads she tried never met her expectations. So I decided to study baking and started testing different kinds of bread. The bakery is actually named after her. We eventually parted ways, but my love of bread remained constant.

What inspires you, and what’s next for Panadería y Repostelería Lorá?

I love the idea of trying new things and hoping someone else falls in love with what they’re tasting. I hope the bakery continues to grow and gains the reputation of being among the best in Mexico.

We're working with Chase Sapphire to curate incredible experiences near, far and the places in between. For inspiration on where to explore next, visit Chase Sapphire.

Help us keep them coming by directly supporting Atlas Obscura.
Become a Member
$5/month $10/month $20/month
See All Membership Options
Already a part of our membership program? Sign in.
No Thanks
Keep Exploring
Trip

Mexico City
From $2,375 USD
Immerse yourself in the complex cultural identity of Mexico City through its street food, bustling markets, and well-seasoned history of gastronomic traditions.
Sponsored by Chase Sapphire
Trip

Ecuador
From $4,490 USD
The Galápagos Islands have wildlife like no other place in the world—and in the company of local tour guides and expert wildlife biologists, this will be a tropical island experience unlike any other.
Sponsored by Chase Sapphire
film

Atlas Obscura and Chase Sapphire® worked together to take cardmembers on a first-of-its-kind subway trip through space and time.
Sponsored by Chase Sapphire