The Curious Case of the Deep-Sea Bone Worms and the Vanishing Underwater Gator - Atlas Obscura
Want to see fewer ads? Become a Member. 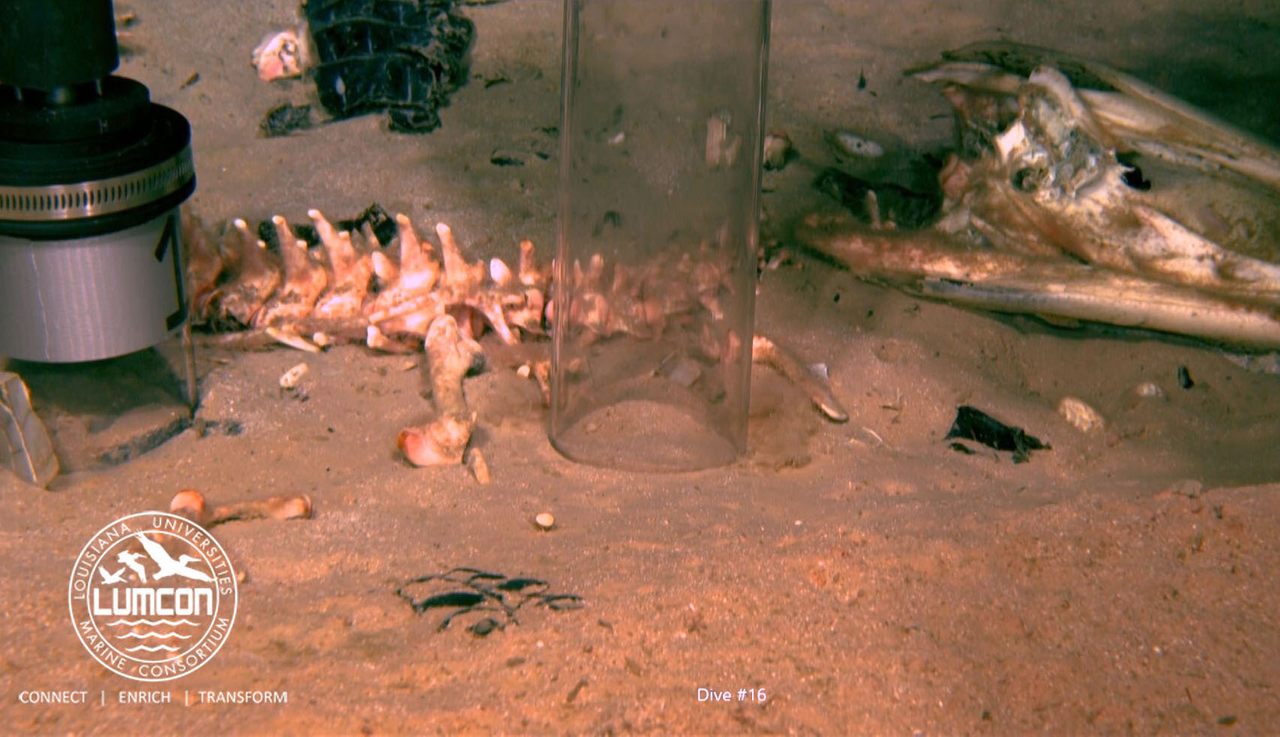 About a year ago, scientists dumped three dead, frozen alligators into the ocean from a ship in Louisiana. They sank a little over a mile before making contact with the seafloor. Scientists have revisited the sunken reptiles several times since. One gator’s status is unknown, one gator has been slowly devoured by a new species of bone-eating worm, and one gator mysterious vanished—eaten or carried off whole by some enormous creature of the deep. “That one genuinely surprised us,” says Clifton Nunnally, a research scientist at the Louisiana Universities Marine Consortium. “There was not a single scale or scute left of that gator.”

Nunnally and Craig McClain, the executive director of the consortium, are the engineers behind Louisiana’s great gator experiment, which involved dropping the reptiles into the deep sea to see what animals would come to feast and, ultimately, to gain a better understanding of food webs in the deep sea. Their reptilian research is a passion project, spun off from more formal research on food oases around deep-sea pieces of wood. But it has already offered valuable insights, some of which were recently published in PLOS One.

The team’s biggest revelation came from the carcass of Alligator Two, which dropped on February 20, 2019. McClain and Nunnally observed the site with a remotely operated vehicle for 16 minutes, at which point a single rattail fish came to investigate, but they soon had to leave to monitor a piece of wood. They weren’t able to return to the site until April 12, at which point the reptile had been reduced to a sloping heap of bones, many of which were covered in a reddish hue. “We dropped down and saw a red shag carpet,” McClain says, adding that the color is a clear indication the bones were colonized by a species in the genus Osedax, or bone-eating worms. It’s the first time any Osedax species has been observed in the Gulf of Mexico.

McClain’s team collected the worm-riddled bones and shipped them off to Greg Rouse, a marine biologist at the Scripps Institution of Oceanography at the University of California San Diego. Rouse’s initial scans revealed the gator-bound worms are genetically distinct from all known species of Osedax. Rouse will describe the new species in an upcoming paper. “Describing the species is a whole new publication, which can take a considerable amount of effort,” McClain says. Rouse is probably up the task, having once described 14 species of the bone-eating worms in a paper called “An inordinate fondness for Osedax.”

Alligator Three, which dropped on April 15, 2019, offered no concrete discoveries, but opened up an oceanic mystery. When the researchers revisited the site eight days later, the gator was gone. “There was just a massive depression where the alligator was,” McClain says. His team searched the surrounding area for a 45-pound weight they had tethered to the gator, to ensure it stayed in one place. Eventually they found it, nearly 30 feet away.

Though the culprit will likely never reveal itself, the researchers have suspects in mind. “It had to be something that could drag a 45-pound weight,” McClain says. “It was the first time I felt like an underwater detective, coming back to the scene of the crime and trying to piece together what happened.” The researchers knew the gator had to have been abducted by a predator strong enough to sweep away the gator and its accompanying weight, most likely by a large shark. The most likely suspects that are known to swim in the Gulf of Mexico at depths of 6,500 feet are the sixgill or Greenland shark, two large predators that can grow as long as 16 to 22 feet, respectively.

A less likely possibility, Nunnally says, is a giant squid, prowling the seafloor for a meal. “But that would have been a sloppy feeding, with bits and pieces left around,” he says, adding that the two suspected sharks have large enough mouths to swallow the gator. “I have yet to see a squid that could devour a gator whole, and I don’t want to be on the ship if we ever discover it.”

McClain’s lab has no upcoming plans to drop any new gators into the ocean, having set their sights on something bigger. “We want to do a whale fall,” Nunnally says. “We want to find the time and funding to do it right, with a whale that washes up dead on the coast.” Until then, the two will continue retrieving and analyzing their wood falls, which Nunnally says will take years. There’s currently no research money for future gator drops, McClain says. But they hope to do it again one day.

Scientists Dropped Dead Gators to the Seafloor to See What Bites

It takes a lot to go from the bayou to the deep sea.
islands

Lauren Tischendorf is the first woman to complete the grueling 20-mile swim around Lord Howe Island in Australia.
science

A languid fish has a story to tell about longevity, lifestyle, and loss.
beach

In Cape Cod's 'Sharky' Waters, Humans Learn to Coexist with an Apex Predator