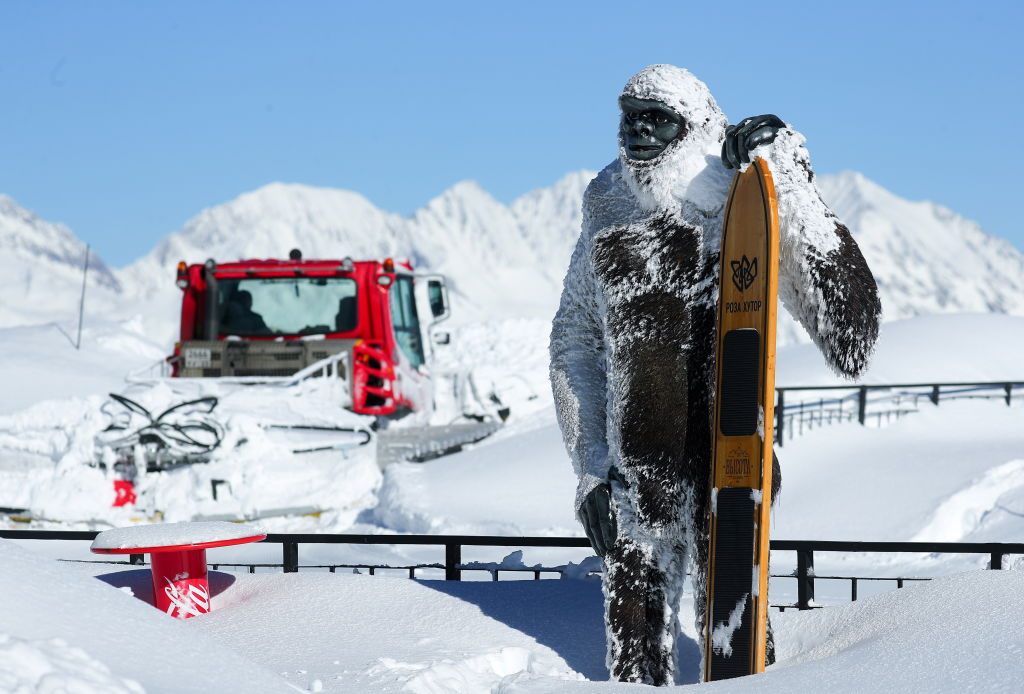 Cryptozoologist Richard Freeman says we "shouldn't be surprised" if hominids like Russia's yeti (known as the almasty) exist, given that other hominids, like Homo floresiensis, died out just 12,000 years ago. This sculpture of an almasty is at an alpine resort in Sochi, Russia. Vladimir Smirnov/Getty Images
In This Story
Place

This picturesque round lake is said to be home to the legendary Mokèlé-mbèmbé.
Destination Guide

According to Indonesian folklore, deep in the Sumatra highlands, among the monster flowers and sun bears, a 4-foot-tall primate known as the orang pendek, “tiny man,” walks on two legs. And beneath the calm waters of an almost circular lake, Congolese legend says an enormous, 50-foot crocodile, known as mahamba, devours entire canoes—passengers and all. Scientists have found no proof that these creatures or other storied cryptids like them exist, but cryptozoologist Richard Freeman believes these mysterious animals are out there. As the zoological director of the Centre for Fortean Zoology, a professional cryptozoology organization based in England, he’s traveled around the globe hunting for monsters—from the Gobi Desert in search of the Mongolian death worm to the Brazilian rainforest looking for giant anacondas. “Some people don’t like to use the word monster,” Freeman says, “but it’s derived from the word ‘monstrous’ meaning ‘a revelation,’ which I think is quite an appropriate term for a cryptid.”

Atlas Obscura talked with Freeman, who just published a new book, In Search of Real Monsters, about how cryptid stories develop, the Victorian obsession with the unknown, and why he believes the great days of zoology are not over.

How have stories about cryptids developed from sightings of unusual but scientifically recognized animals?

A lot of animals we know about today were once thought of as nothing more than legend. For example, the mountain gorilla was this hairy monster from folklore that occasionally would descend from the mountains and tear a branch from a tree and beat an elephant to death. Of course, we know that they don’t do this. This is the mythology that is built around them because they look big and scary. And actually, they’re not. They’re quite placid animals.

But sometimes these stories turn out to have a grain of truth in them. There’s a large tree frog in South America called the giant leaf frog. Indigenous people in South America would say that this frog had magical properties and that its secretions would turn you invisible and stop you from being hungry and thirsty. When biochemists looked at its secretion, they found that it negated feelings of thirst and hunger.

Have there been periods in history when people have been more open to the idea of unidentified creatures?

In Victorian times, there was a lot of exploration and discovery. You would go out, explore places, look for new species. Unfortunately, they’d shoot them all in Victorian times. When indigenous stories were told of creatures unknown to the west, scientists listened. A hairy giant from the jungles of Africa turned out to be the gorilla. Stories from Congo of a beast that was a hybrid of a giraffe and a zebra turned out to be a short-necked relation of the giraffe called the okapi. In the early 20th century, we see the trend continue with the Komodo dragon and the giant panda both found.

Why do you think the search for mystery animals captures the imagination of so many people?

Because there’s no paradigm shift. If you look at ghosts, you have to postulate life after death or psychic power. But cryptozoology is just a branch of zoology. It’s about animals that are unknown to science. And it’s not all big, scary monsters. Cryptozoology is just as interested, for example, in the rediscovery of the ivory-billed woodpecker, which is a large species of woodpecker in Cuba and the southern states that’s supposed to have died out just after World War II.

And there’s a precedent for these things. The night parrot in Australia was thought to be extinct for decades and it was just recently rediscovered. They thought leopards were extinct in Zanzibar, but they’ve been recently rediscovered. So if leopards can live on a tiny, overcrowded island like Zanzibar without being seen, then surely the Tasmania wolf can live on Tasmania [which is larger and less populous]. These things are turning up all the time—animals that were thought to be extinct or new animals.

What role does cryptozoology play in today’s world of cellphone cameras and satellite imagery?

The world is not fully explored. You have this false notion that because of satellite photography the world is explored and mapped, which it isn’t because you can’t see through a forest canopy. There are large swaths of central Africa, Asia, Australia, South America that are uncharted. The great days of zoology are not done. Things are being discovered all the time.

What is the closest you believe you came to spotting a cryptid?

Oh, that was in Russia in 2008. We were staking out an abandoned farmhouse that was two miles from a little village in the Caucasus Mountains. We were looking for the Russian wildman or the almasty. The Soviet Union took this so seriously that they had what they called a snowman commission that included people like Pyotr Smolin, who was the head of zoology at the Darwin Museum in Moscow. We were there with Russian and Ukrainian scientists. We set up camera traps. We put out meat and fruits and then we waited.

At about 2:30 in the morning, we went inside to warm ourselves up. The door was slightly ajar and there was moonlight and starlight slipping through. Then from outside, we hear this big, guttural vocalization. And we hear something walking on the veranda and, whatever it is, it’s big. It passed by the door and it blocked out the starlight and moonlight. So whatever it was it had to be at least seven feet tall. So in the morning, we checked all the camera traps, but all we got were shots of the vegetation.

Where to Find the World's Best Hometown Monsters

Here are 25 places to see yetis, sea monsters, Sasquatch, and other cryptids.
cryptozoology

Join us for a daily celebration of the world’s most wondrous, unexpected, even strange places.
cryptozoology

This terrifying creature has evolved over millennia—but never lost the need to feed.
Video • Wonder From Home