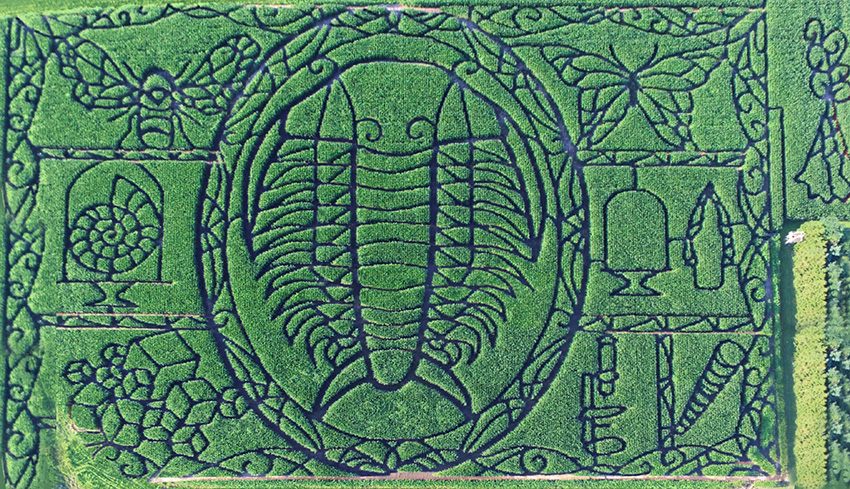 Get lost. Courtesy of University of Wisconsin Geology Museum

There are a few things here at Atlas Obscura that are what you might call, “of perennial interest,” and that list includes mazes and cabinets of curiosity. So now that the University of Wisconsin’s Geology Museum has teamed up with a local farm to create a corn maze in the shape of a fossil-filled wunderkammer, you better believe we’re going to share it.

As Science is reporting, geologists from the museum worked with the Treinen Farm, some 20 miles north of Madison, to create a massive, science-themed labyrinth that pays tribute to the state’s official fossil, the trilobite (an early arthropod that crawled sea floors for 270 million years).

From the air, one can see that the maze is split up into sections like the cubbies of a curio cabinet, each containing a different specimen, sketched out of the corn. The center of the maze is taken up by the massive trilobite design, which is said to be almost 500 feet long. On either side, the path of the maze forms the shapes of a bee, a microscope, an arrowhead, and more, each representing some aspect of the state’s scientific heritage. And each area is separated by a twisting filigree for visitors to get lost in.

In addition to the maze itself, which will be open all fall, the Geology Museum will be offering educational fossil courses for the duration.

Hubble Spotted a Strange New Object in Our Solar System

It's kind of a comet and kind of an asteroid that orbits itself, and it could tell us something about early Earth.
cornmazeswunderkammersfossilsnews

Exploring the Mysterious Allure of Mazes and Labyrinths

On the joys and frustrations of losing yourself.
mazes

Here's what it takes to transform a field of corn into a truly enormous tardigrade.
science

Found: A 177,000-Year-Old Jawbone, the Oldest Evidence of Humans Outside Africa

The story of human migration is undergoing a dramatic revision.
dinosaurs

How We Know That This Dinosaur Had Bright, Audacious Plumage

Microscopic structures hint at an iridescent past.
Want to see fewer ads? Become a Member.
From Around the Web
THE GASTRO OBSCURA BOOK
Taste the World!
An eye-opening journey through the history, culture, and places of the culinary world. Order Now