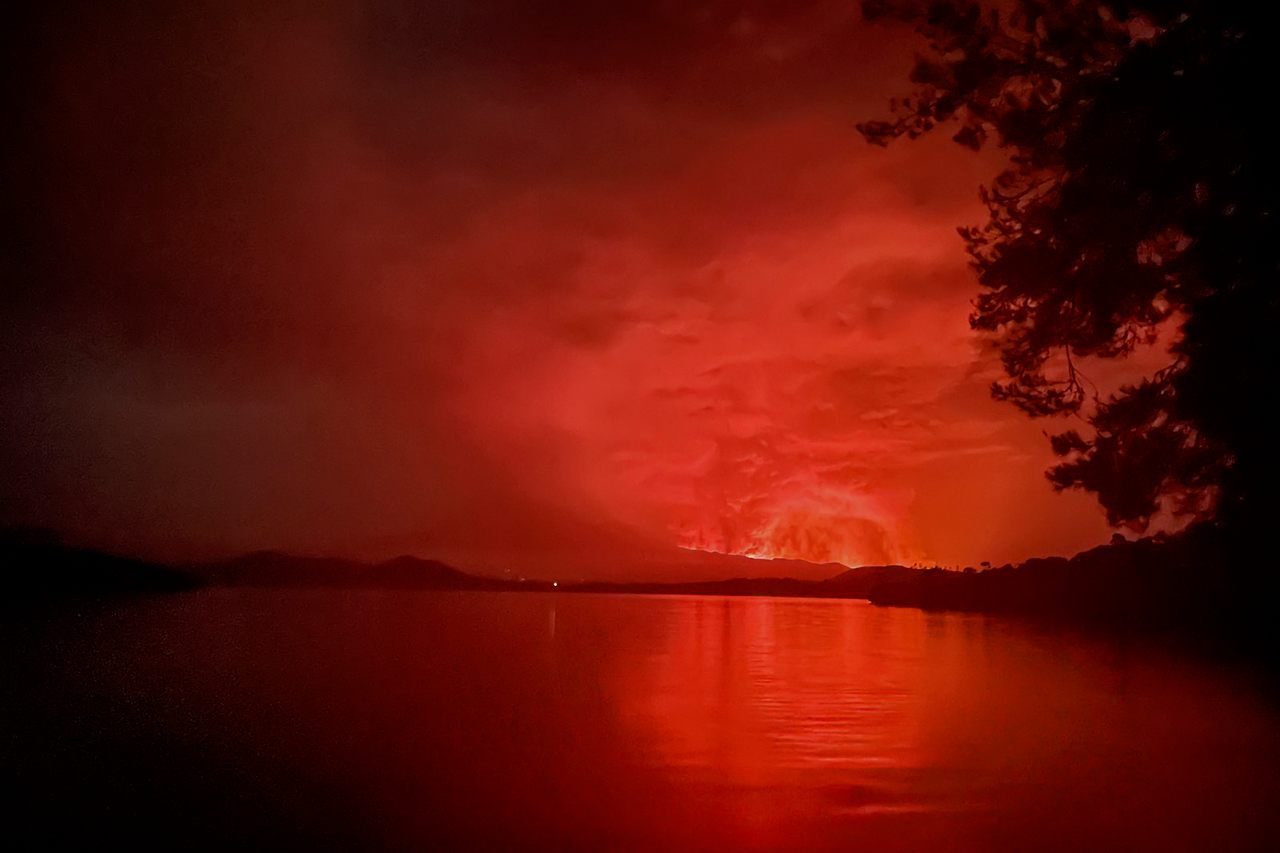 Flame spewing from the Nyiragongo Volcano, as seen across Lake Kivu. ALEX MILES/AFP via Getty Images
In This Story
Destination Guide

Democratic Republic of the Congo

On the evening of May 22, 2021, Nyiragongo, a mountainous volcano in Democratic Republic of the Congo, suddenly erupted, killing dozens and triggering a pandemonious exodus of swaths of Goma, the city that sits on its flanks. As lava scoured anything it touched, the night sky itself hummed with deep crimson—the heavens themselves looked to be burning down.

The eruption appeared to be mercifully short-lived. Molten rock poured from fissures on Nyiragongo’s flanks and sped toward Goma, but ultimately missed the city proper. The lava, which began flowing on Saturday, stopped erupting out of the volcano sometime on Sunday morning, encouraging many to return to their homes. But that lava still left a trail of heartbreaking destruction in its wake: It ploughed through 17 villages, destroyed hundreds of homes, killed dozens, separated hundreds of children from their families, and cut off water pipelines and power supplies. The United Nations estimates that it left 20,000 without homes.

The uniqueness of the region’s geology—the slow tectonic sundering of East Africa, and the presence of superheated plumes of material rising from Earth’s deep mantle—means that the lava here has a strange chemistry: It is severely lacking in silica, a compound that gives most lavas some structural rigidity that stops them flowing too quickly. So rather than the rolling creep of volcanoes such as Iceland’s Fagradalsfjall Volcano, Nyiragongo’s lavas have been seen surging at 40 miles per hour. This is lava that can’t be outrun. That the eruption gave no clear warning signs made these flows a kind of ambush.

As awful that eruption turned out to be, it’s worth noting that the volcano’s past paroxysms have been far more prolific. One in 2002, for example, involved lava incursions across the city; rivers of flame that destroyed up to a fifth of the sprawling metropolis, killing hundreds. The apparently fleeting nature of the volcano’s latest, then, came as a huge relief to those fleeing it.

But it’s too soon to breathe easy. Those monitoring Nyiragongo—from scientists at the Goma Volcano Observatory in the city, as well as many international researchers farther afield—have been watching the plethora of earthquakes that have rocked the region since the eruption began. Some have been powerful enough to collapse buildings in Goma. Cracks at the surface have emerged here and there, snaking through the streets.

Trying to determine what this seismic activity represents isn’t easy. Magma forcing its way through rock creates earthquakes, but so does the closing up of vacancies created by the drainage of magma. The underground movement of hydrothermal fluids can also cause rumbles. It’s easier to tell what’s going on if you have a detailed seismic record of the sorts of symphonies performed around prior eruptions, but this is the first time an expansive array of seismic monitors has been operational during one of Nyiragongo’s eruptions. So the fresh seismic data is useful, but not as useful as it would be with more insight into Nyiragongo’s past subterranean shenanigans.

Fortunately, scientists have another trick up their sleeve: satellites with radar systems, which can be used to detect subtle changes in the shape of a landscape. Following the eruption, scientists began tracking a metamorphosing patch of earth just south of the volcano. It’s been suggested that this convulsing is being caused by the injection of magma just below parts of the city itself.

Magma doesn’t always erupt. Quite often, at volcanoes all over the world, molten rock makes it to just a few thousand feet below people’s feet, and no farther. This can happen for a number of reasons—the ground simply proves too difficult to break through, or the magma cools down and loses its buoyancy.

That initially appeared to be the case over on Iceland’s Reykjanes Peninsula in March 2021, when a sheet of magma rose to the surface but failed to make an appearance. Instead, it kept moving around the region, trying to find an escape hatch. Eventually it did. The same could be true of the magma moving under Goma.

Under the right conditions (which scientists are still trying to decipher), magma mixing with shallow bodies of water can trigger explosive blasts, a style of volcanic activity called phreatomagmatism. Next to Goma sits the rather sizable Lake Kivu, and recent work has shown that in the past 12,000 years or so there have been at least 15 phreatomagmatic eruptions in the area. Such eruptions, which can begin with little warning, can cause a lot of damage through land-excavating explosions and scorching, superfast clouds of volcanic gas and ash. They’re bad news.

A second major hazard is arguably more nefarious. The magma powering Nyiragongo is packed with carbon dioxide. Even when an eruption is not occurring, this gas slowly bubbles up into bodies of water above it. Over time, it gradually leaks out and, being invisible, odorless, and denser than air, silently gathers in topographic depressions. Dozens of people asphyxiate in these pockets every year.

At the moment, Lake Kivu has a lot of carbon dioxide in it—about 70 cubic miles’ worth. It also holds 15 cubic miles of noxious methane. For now, all of that gas is trapped within the lake. But if a major volcanic eruption takes place in the lake’s basin, both gases could pour onto the urbanized shoreline, asphyxiating anyone caught in it.

That is why scientists are spooked. They cannot say if the volcano is going to erupt again, or what kind of eruption it would be. But it appears that the potential is there. Authorities recently issued a mandatory evacuation order for 10 of the city’s easternmost neighborhoods. People have been seeing fleeing on foot, in cars via jam-packed roads, and via boats across Lake Kivu. It could save a lot of lives, but people are still at risk.

For now, scientists will be doing two things: watching the Earth closely from near and far for the telltale signs of magmatic monsters rising, and remaining hopeful that, this time, those monsters stay confined below.

How Do You Win a Silent Town Crier Competition?

Thousands died in 1986 when the crater lake unleashed a cloud of toxic gas. Could it happen again?
disasters

Researchers braved storms and monstrous underwater mountains to learn why one region’s earth-shaking is so peculiar.
disasters