The British Once Built a 1,100-Mile Hedge Through the Middle of India - Atlas Obscura
Want to see fewer ads? Become a Member. 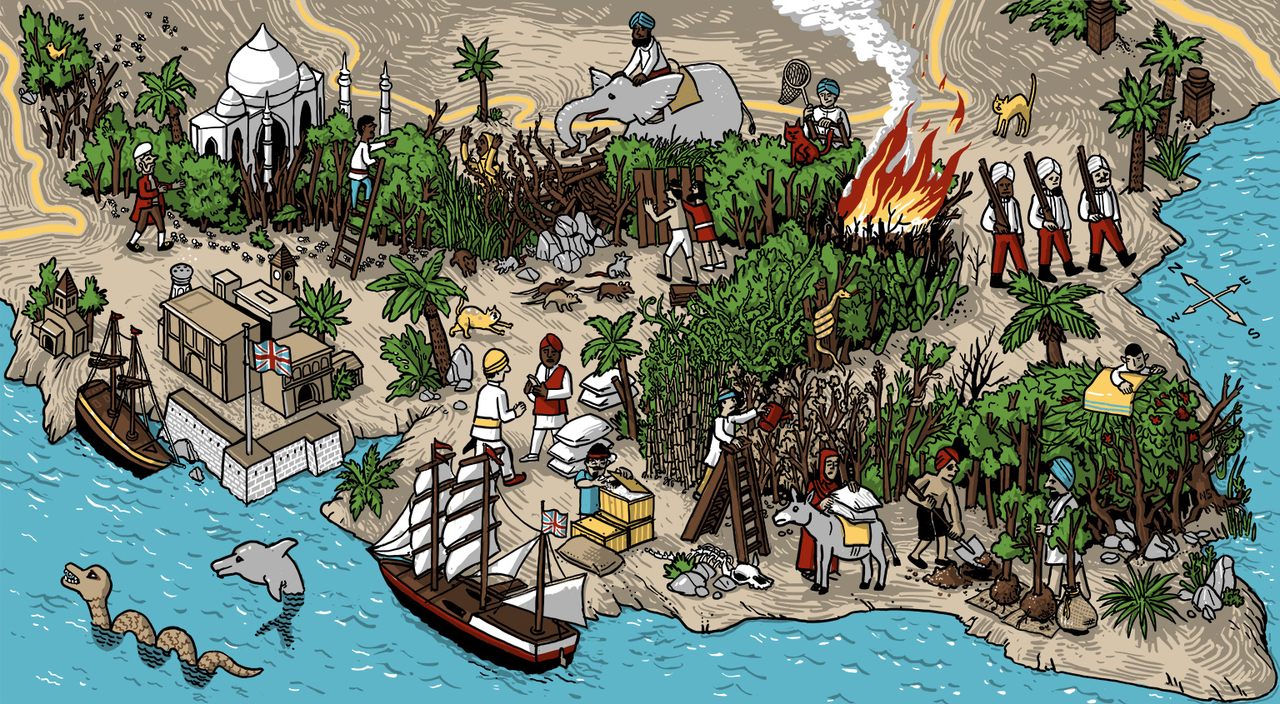 Through the whole of its existence, the Great Hedge of India was beset by difficulties and never quite accomplished its purpose. Illustration: Nigel Sussman
In This Story
Destination Guide

In 1878, W.S. Halsey, Commissioner of Inland Customs, reported on the state of British India’s giant hedge. The hedge had grown to more than 1,100 miles long, he wrote, long enough to stretch from Berlin to Moscow. More than half of the barrier, Halsey reported, was made up of “perfect and good green hedge” or “combined green and dry hedge.” In parts, it was 12 feet tall and 14 feet across.

The British Empire had been working on this giant hedge for at least 30 years. It had, at long last, reached “its greatest extent and perfection,” wrote Roy Moxham in The Great Hedge of India. It was an impressive monument to British power and doggedness. One British official wrote that it “could be compared to nothing else in the world except the Great Wall of China.”

As he reported on the extent and health of the hedge, though, Halsey knew its time was coming to an end. That same year, the empire stopped all funding for the mad project, and it was not long before the hedge had disappeared entirely. When Moxham, an English writer, went looking for it in 1996, he couldn’t find a trace.

No one knows where the idea to build a giant hedge across the heart of India came from. It seems a little magical, like a fairy-tale hedge that sprouts, thorny and tall, to protect a sleeping princess before disappearing back into the soil as quickly as it arose. But there was nothing charming about what the British built. It wasn’t meant to protect anything except imperial revenue. It grew along the Inland Customs Line, a bureaucratic barrier that the British created to impose a high salt tax on the people living on one side of the line—the relatively saltless one.

The Customs Line was longer than the hedge ever was—2,500 miles, from Punjab in the northwest, snaking down to Madhya Pradesh, just south of the city of Burhanpur on the Tapti River. Sometime in the 1840s, British officers started fortifying this administrative line with thorny material to block smugglers from crossing the line and ducking patrols.

At first, the hedge was made mostly of dry branches lugged into place and piled high. But that proved a fruitless task, since it had to be replaced year after year. The line was divided into patrolled sections, and in some places the patrols started to plant and cultivate live hedge, with the idea of creating something more easily maintained and permanent.

Growing a live hedge wasn’t easy, though. The British tried using dwarf Indian plum trees, babool trees, prickly pear, thuer, bamboo, and many other local plants. In some arid places the trees just withered and died. Elsewhere, seedlings were swept away in floods. In other spots, the soil simply wasn’t rich enough to support the growth of anything beyond scrub.

But as the British do, they kept working at it. They dug ditches and brought in better soil. They built embankments to resist floods. They experimented until they found the best trees for each of the many climates that the hedge passed through. Eventually it grew long and tall and wide.

It was, in the words of Sir John Strachey, a lifelong civil servant in British India cited in Moxham’s book, “a monstrous system,” that had few parallels “in any tolerably civilised country.” Each mile required 250 tons of thorny brushwood and other organic material to create, and in one year the patrols might carry 100,000 tons of this plant matter to shore up stretches of dry hedge. In most places, the barrier was at least 10 feet tall and 6 feet thick, but it grew bigger in some areas. It became “a standing monument of the industry of our officers and men and an impervious barrier to smugglers,” another commissioner wrote.

But there were problems. White ants infested the hedge and could bring whole sections down. Bush fires incinerated miles at a time. Storms and whirlwinds could sweep parts of it away. Locusts invaded. Parasitic vines blighted the hedge, the trees died of natural causes. One section had rats living in it, and the patrol there introduced feral cats to combat them.

For all that work, the hedge, like most fortified borders, was only partially successful at stopping smugglers. There were gaps where no one could get plants to grow. Smugglers used the trees themselves as ladders. Sometimes they flung sacks of salt over the top to collaborators on the other side. The maintenance the hedge and enforcement of the line were constant struggles. When the hedge was abandoned in 1879, it was unmourned.

More than a century later, the writer Moxham went looking for traces of this living monument to British hegemony and persistence. For him, the search began with the purchase of a used book, Rambles and Recollections of an Indian Official, by Sir William Sleeman, which happened to mention the hedge. Other sources were few and hard to find, and as Moxham learned more about it he found that it had been almost entirely forgotten.

Still, he was determined to learn the story of this quixotic piece of India’s colonial history. Over the course of two years, Moxham searched along the old Customs Line for any trace—or memory—of the hedge. In most places, no one knew it had ever existed. Finally, he met an older man who remembered the hedge and took Moxham to the site where it once stood.

There, Moxham wrote, “Clusters of thorny acacias topped the embankment. Some were 20 feet high. Thorn-covered Indian plum trees barred the way .… We had found it at last.”

The hedge itself might have died, but the path it cut through the country was preserved, in a way. Later in India’s history, road designers looked at the long, flat embankments that cut through the country as an infrastructure asset. The hedge’s path was, in certain areas, transformed into a series of roads. Moxham had such a hard time finding any trace of the Great Hedge of India because its history had been paved over.

A Tiny New York Town With Not One, But 5 Indie Bookstores

The village of Hobart, home to fewer than 500 people, serves as a modest reminder that books can change people and places.
wallscolonialisminfrastructuretreesfeaturesplantshistory

Clones and descendants of the famed tree grow on 6 continents.
trees

A global map of science's most important tree.
architecture

A Short History of Tree Shaping

People have long tried to bend trees to their will, for both practical and aesthetic reasons.
bridges

Toward a Better Understanding of South Asia's 'Living Bridges'

Human and plant, working together.
Video

4:00
Want to see fewer ads? Become a Member.
From Around the Web
Atlas Obscura Trips
Delhi and Rajasthan: Colors of India
View This Trip
Thanks for sharing!