The Woman Who Taught the World How to Fly - Atlas Obscura
Want to see fewer ads? Become a Member. 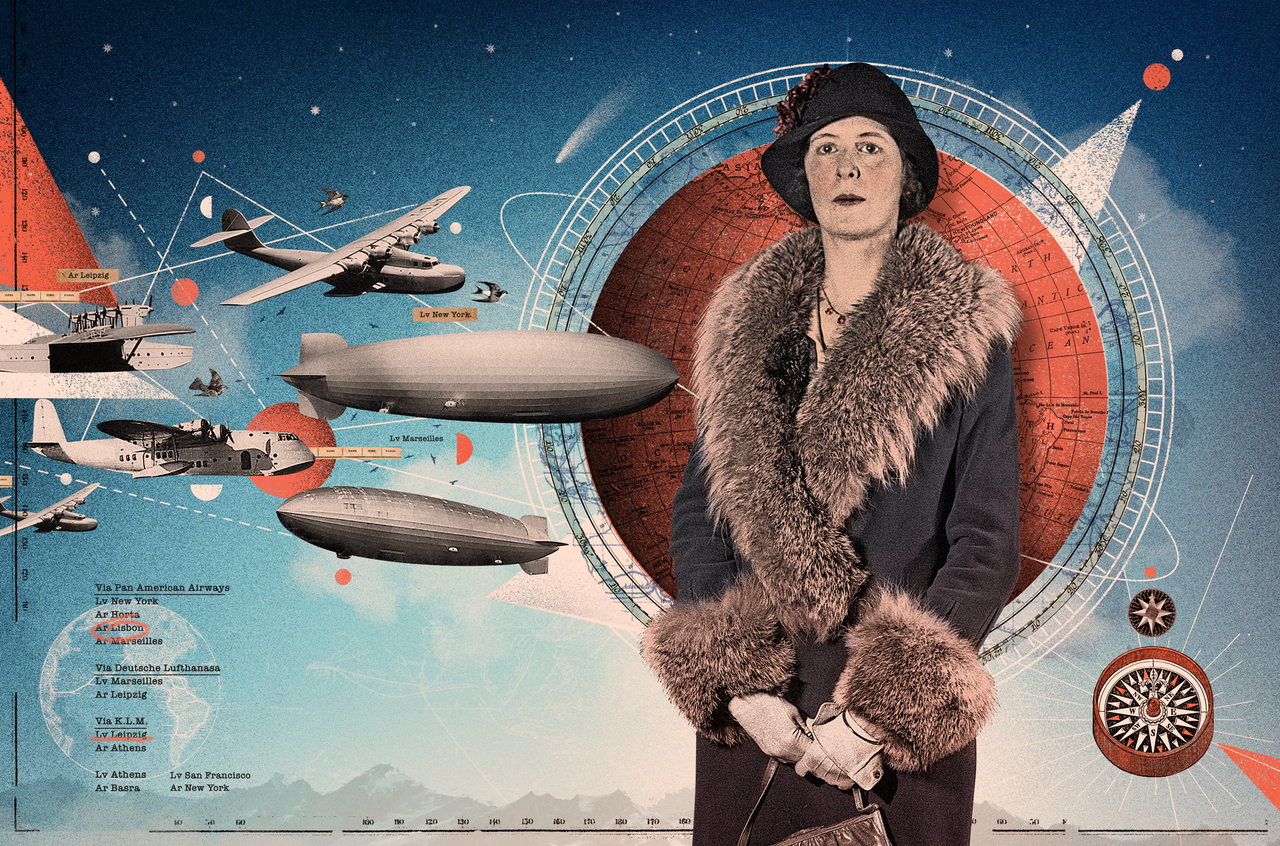 Clara Adams was known as the "first flighter" and the "maiden of maiden voyages," and she became a good luck charm to pilots and passengers alike. Illustration: Eduardo Ramón for Atlas Obscura; (Adams) Bettmann/Getty Images

At 3:12 p.m. on the afternoon of Wednesday, June 28, 1939, Clara Adams took off from an airport on Long Island on the first leg of her planned flight around the world. She would not be following the ill-fated itinerary of her friend Amelia Earhart, who had, two years earlier, attempted to become the first woman pilot to circumnavigate the globe by air. Earhart had traced a course east from Oakland, California, along the equator until she disappeared somewhere in the South Pacific. Adams’s flight path would take her on a more northerly route, through Europe, the Middle East and Southeast Asia before island-hopping across the Pacific—a distance she calculated to be 24,609 miles.

Sixteen days, 19 hours, and four minutes later, Adams landed safely at Newark Airport, the fastest person, man or woman, to circle the earth by commercial airliner. But Clara Adams’s name is little remembered today because she was not a pilot. She was a passenger. “The first flighter” newspapers called her—“The maiden of maiden voyages,” who held tickets for every major inaugural flight through the dawn of air travel.

It all could have been seen as the indulgent hobby of a bored widow with too much money, just as the daring flights of Amelia Earhart and other early pilots could have been dismissed as little more than dangerous stunts. But the pioneers of aviation were doing more than pursuing records. They were proving to the world that airplanes could be the future of travel.

“The concept that planes would carry passengers—it wasn’t a given,” historian Barbara Ganson, of Florida Atlantic University, says of the early days of flight. “Even the military wasn’t convinced it was a good idea.” Test passengers such as Adams, who became celebrities in their own right, convinced the general public to fly.

“She was Wally Funk,” Ganson says, comparing Adams to a more modern traveler—who would have been the first female astronaut had NASA not passed her over in the 1960s, and who finally slipped the surly bonds of Earth as a passenger on one of the first commercial space flights in 2021. “Clara Adams spurred interest in air travel. Now Wally Funk is doing the same for space travel.”

There’s “not a gray hair in my head, proving that flying is safe,” the 54-year-old woman with dark curls under a tan Panama hat said as she disembarked from her history-making voyage. Adams was then immediately whisked by car to another destination: the World’s Fair in Queens, New York. There, 1,500 people waited in the aviation exhibit—a vast pavilion designed to evoke a bustling metropolitan airport—to hear of her travels.

Adams had first taken to the sky 25 years earlier. It was 1914—the year of the first commercial flight—and the then-30-year-old woman had paid $10 to be the sole passenger in a Thomas flying boat a record 700 feet above Lake Eustis in central Florida. She was terrified. “My heart was going as fast as the motor,” she would later say, but that fear didn’t deter the woman who had “always loved the sky.” Three years later, she took off in a Wright Flyer. Marjorie Stinson, one of the United States’ first female pilots and the only one admitted to the U.S. Aviation Reserve Corps, was at the stick as the duo soared above central Texas.

Adams went on to befriend many of the early female aviators, but she never had any interest in sitting in the cockpit herself. She was an aviation buff with no curiosity about the mechanics of flight; her interests were of the artistic sort. For her, air travel was about the experience, and in that she was an explorer like those who risked their lives to climb ever higher peaks and see the world anew from an unlikely vantage. High above Earth—on one of the first dirigible test flights over the Alps or as the first paying woman passenger on a trans-Atlantic zeppelin flight or on the first commercial trans-Pacific airplane flight—Adams collected memorabilia, sketched the scenes she saw above the clouds, and captured her astonishment in vivid prose. (Some of her scrapbooks are now in the archives of the History of Aviation Collection at the University of Texas.)

Aboard the maiden flight of the Hindenburg, which departed from Frankfurt on May 6, 1936, Adams recorded the “breath-taking views” she enjoyed from the slanting windows of the German airship as it floated to Lakehurst, New Jersey: “the millions of twinkling lights of Mannheim and Cologne from 1,000 feet altitude; the last sight of the tip of England at Land’s End with green fields, red cliffs and white houses shining in the early morning sun; the pushing out to open sea with 3,000 miles of ocean and uncertain weather ahead of us; a torrential rain squall; flying for hours above a vast sea of dense cottony clouds so white that it was impossible to gaze at them in the blindingly bright sun; seeing the sharp black outline of the Hindenburg on the clouds surrounded three concentric circles of rainbows.”

Adams remembered the Hindenburg landing in Lakehurst with awe: “We skimmed over the field at an altitude of about 600 feet as the first rays of sun began to illume the countryside. The ground crews of blue-jacketed sailors were standing ready to catch the ground line of our ship as she drifted over the field for her mooring.” A year later, coming into the same station, the airship exploded, killing 35 of the crew and passengers and one in the crowd that awaited the landing.

That some remember Clara Adams among the spectators on the ground that day—historians disagree on whether she actually witnessed the tragedy firsthand—is testament to her prominence in the aviation world in the 1930s. She knew, by then, the power she had to shape public opinion about air travel: The day after the disaster she sent a $100 deposit for the inaugural flight of a new German airship. “This I did to prove that I had not lost confidence in dirigible travel,” she later said.

Following her commercial circumnavigation by plane, she stood before the audience gathered to see “the world of tomorrow” that the World’s Fair promised. She tried to capture and convey the magic of flight and the wonders this new form of commercial transportation could allow. She had raced around the world—she even had a competitor in a man named Norman L. Lee, a New York broker, who was circumnavigating the globe via commercial flight in the opposite direction—from Marseilles to Basra to Hong Kong to Guam.

She had marveled at the sunlight reflecting off the golden dome of a Buddhist temple in Rangoon. She had celebrated the Fourth of July in India, with Lee and Umaid Singh, the Maharaja of Jodhpur, himself an aviation pioneer. And she had walked among the thousands of terns, boobies, and frigatebirds that populated Wake Island in the central Pacific. “It feels like a dream,” she told the crowd. “When we were young we all read about the famous magic flying carpet. I have just flown on a good many carpets.” She added, “I wish all could have the opportunity to enjoy that same experience.”

Her around-the-world ticket had been a pricey $1,935 (about $40,000 in today’s dollars), but Adams dreamt of a day everyone—but especially women—could live in this new, more interconnected world. Mid-flight, more than a decade earlier, she had written, “It is a pity that the vast majority of women are so situated that a ride in the air is as wild a dream to them as a trip to the moon.”

“I’ll go to the moon if they ask me,” Adams said in 1966—but no one was asking. She had flown, by her own estimate, some 200,000 miles on inaugural flights though the 1920s and 1930s. She had become a good luck charm of pilots and passengers alike in those early days. But World War II grounded her, and by the 1960s, the era of aviation adventure had largely passed. There was no longer any need for—to borrow the modern parlance—an influencer like Adams to convince the public of the benefits of flight. The world had entered what would become known as the “golden age” of air travel, when a plane ride was common enough to seem like a possibility to many Americans but was still imbued with the sense of the luxury and glamor Adams had known aboard the dirigibles of the 1930s. Soon enough air travel would lose that sheen as it became more and more accessible (and occasionally unpleasant).

Even in Tannersville, the small Pennsylvania town where Adams lived from 1932 to 1937—home base for most of her most famous trips—the “first flighter” became a footnote, says Jim Werkheiser, a Tannersville nonagenarian who has spent decades reconstructing Adams’s life, both in the air and on the ground. “She was a well-known world figure,” Werkheiser says, “but is now a stranger in her own town.”

Despite her omission from the early history of flight, Adams helped aviation become exactly what she had envisioned in 1928. “It is only a matter of time,” she wrote, “when regular air transportation service will be as commonplace as a bus ride.”

Harriet Quimby and Matilde Moisant were best friends and the first women licensed as pilots in the United States.
space exploration

After many a misadventure, his warplane is on display today.
aviation