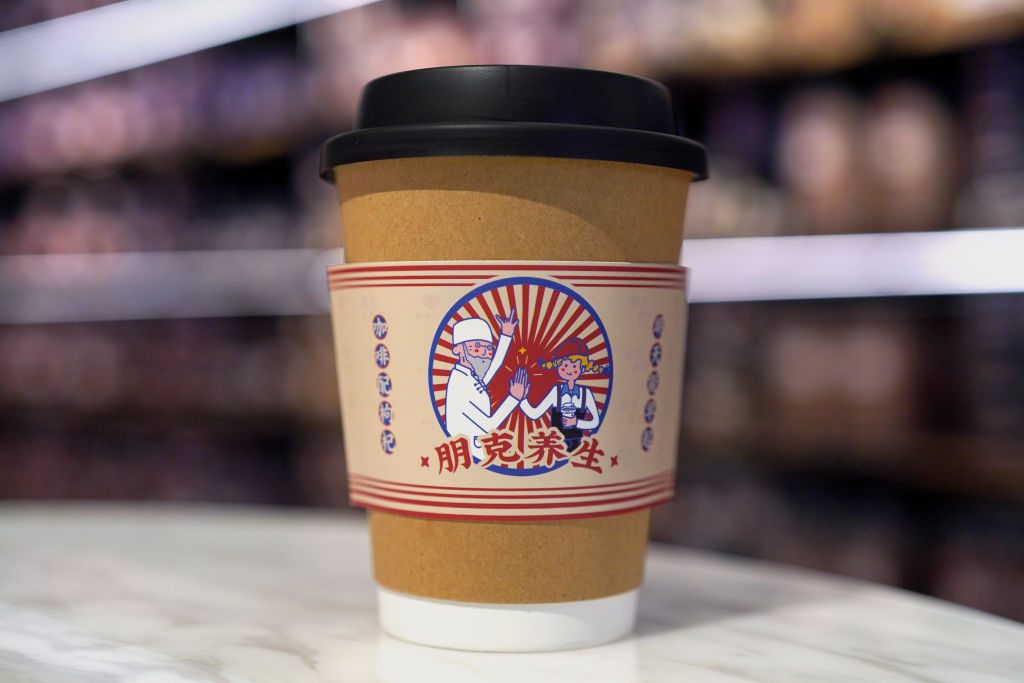 This cup, which reads "punk health," contains goji berry-infused coffee. The berries are held to be good for the liver, kidneys, and other organs. VCG/Getty Images
In This Story
Destination Guide

Goji berries in beer. Chinese medicinal herbs infused in coffee. Staying up all night, but eating a bowl of bird’s nest soup to feel better. You get the gist.

For the last couple of years, a seemingly oxymoronic concept has been adopted by a broad cross-section of young, urban people in China. “Punk health,” or péngkè yǎngshēng, means pairing a vice with a seemingly healthy ingredient.

“People born in the 80s and 90s are almost in their 40s and 30s now, but they also don’t want to follow the same conventional health advice as their parents, like drinking hot beverages or just eating goji berries,” explains Chen Bailing, a Chinese fitness blogger who has written about the concept before. “But they’re also realizing that they have to take care of their body, so this is their form of compromise.”

The term “punk health” first appeared on the Chinese internet in 2017 and reached its apex in 2019, with a slew of articles and videos describing the phenomenon. One news report, for example, featured a 22-year-old girl in China who slept at 3 a.m. every night, but put on five face masks every day to help soothe her increasingly tired skin.“It’s not only self-deprecating, but also a trendy attitude towards life,” writes one article. “I smoked a cigarette with my sister and quickly took a cough drop. We were harming ourselves while maintaining our health,” explains another.

Brands have been quick to cash in on the concept. Several wellness companies received an influx of financing from venture capital firms to jump on the punk-health bandwagon. The goal is to create a product to give customers a shortcut to an otherwise healthy and balanced lifestyle.

And it has proven to be wildly lucrative. One granola bar that was marketed as a meal (similar to Soylent, but solid form) made $3 million USD in monthly sales only half a year after it launched.

Many such products take cues from traditional Chinese medicine, but add a rebellious twist. There are energy drinks infused with dates or hawthorn, coffee with donkey gelatin (thought to help nourish the blood), and candy infused with melatonin to help insomniacs sleep. While many of these foods aren’t necessarily new or novel, they embody the concept in their marketing and sleek branding. The goal is to offset “bad behavior” by consuming something virtuously healthful.

One current commercial frontrunner is Ye Yu Cha, or Night with Tea. These are tea blends especially designed especially for hard-partying night owls. The tea bags come filled with healthful-sounding ingredients like ginseng, goji, tangerine peel, sea buckthorn, and licorice. The idea is that you drink the concoction after a long night out to balance out the effects of staying awake for too long. However, on top of each tea package, underneath the brand name, is advice to “sleep earlier tomorrow.”

But more than a collection of sleek products, punk health is a state of mind. “Another example is that you constantly stay up all night, but buy the most expensive eye cream to compensate,” Chen says. Or exercise during the day, yet binge on fried chicken right afterwards. Spend all day looking at your phone and feel bad about it, but then change the screen background to a forest to feel a little bit better. Eat a large serving of spicy hot pot, and drink a cup of chrysanthemum tea to ease the stomach. “There’s a contradiction to it, but it represents the type of contradiction that young people feel about their lives,” Chen says.

Punk health is ultimately a half-hearted attempt by young people to get a grasp on their health. It’s an achievable, relatable regimen for millennials and Gen Zers in China who aren’t old enough to seriously feel the effects of aging yet, but feel like they should start thinking about it soon. More insidiously, it’s also a reaction to the “996” work culture in China, in which employees are required to work from 9am to 9pm, 6 days a week. Younger workers are facing burnout and anxiety, and punk health is their way of dealing with it.

“Young people are afraid of death, but they can’t escape the pressure from work,” an interviewee told China Investment Network, who conducted a survey on the trend. “Since they can’t restrain the urge to eat junk food, they indulge in punk health.”

The term punk health is intended to be tongue-in-cheek, though Chen points out that, four years into its lifespan, its defiant appeal is fading. Instead of bolstering themselves with purchased punk-health remedies, young people are increasingly describing themselves as “salted fish” (xián yú) and “buddha youth” (fú qīngnián). The former is a metaphor for a dead fish, referring to a person with no ambitions. And the latter describes a disinterested generation that’s unfazed by worldly obligations.

“They see their parents’ generation, who worked hard for many decades to earn money. But when they retire, they have all sorts of health problems that can’t be solved with money,” says Chen. Taking life more casually and acknowledging the human body’s physical limits, then, may be the biggest rebellion of all.

The Curious Case of August Engelhardt, Leader of a Coconut-Obsessed Cult

"The sun, God, and the coconut were like Father, Son, and Holy Ghost."
food

Before Avocado Toast, There Was Snowflake Toast

Join us for a daily celebration of the world’s most wondrous, unexpected, even strange places.
ships

The old-fashioned way is also the carbon-neutral way.
Video • Wonder From Home