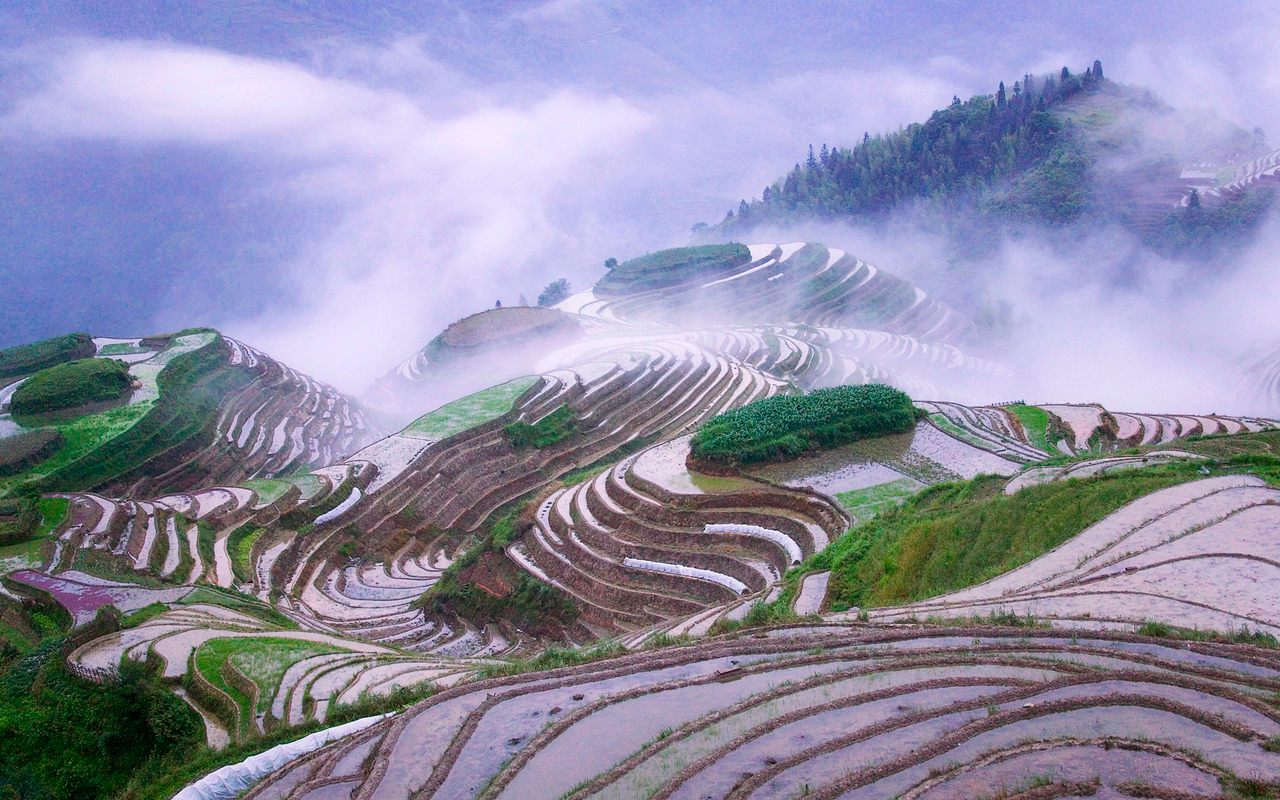 Rice terraces in China's Guangxi Province. miquitos/CC by 2.0
In This Story
Place

A complex and beautiful system of rice terraces covers a million acres over the mountains.
Destination Guide

In the 1960s, an excavation of Chinese tombs from the Eastern Han Dynasty, in what’s now Shanxi Province, unearthed a clay model of a rice paddy that held tiny clay fish. The miniatures, which were created between the years 25 and 220, depict the ancient practice of rice-fish farming, in which farmers stocked their flooded rice fields with carp, according to Rice-Fish Culture in China. It’s a symbiotic relationship. When grown together, the rice plants require fewer pesticides; the carp eat weeds and insect pests, while also providing natural fertilizer.

References to this kind of aquaculture date back to the oldest surviving collection of Chinese poetry, the Shijing, or Book of Odes, which was written around the 11th century BC. It notes that Chinese farmers reared carp in ponds during the period 1142 to 1135 BC. But the origins of this practice are murky, because fish bones are less easily fossilized than those of other, larger livestock. Now, a new study led by Tsuneo Nakajima of the Lake Biwa Museum in Japan, and published in Nature Ecology & Evolution, suggests the practice of rice-fish aquaculture actually began thousands of years earlier than previously believed—around 6200 BC.

The researchers had a hunch that these aquaculture systems originated a long time ago, because rice paddies have been around since 5000 BC, four millennia earlier than the first evidence of carp aquaculture. Some researchers guessed that the rice-and-fish system might have developed around that time, Mark Hudson, an archaeologist at the Max Planck Institute for the Science of Human History who co-authored the study, writes in an email. “Carp are a fish that can thrive in waters affected or controlled by humans,” he says.

One site showed particular promise for an investigation into the origins of fish-rice aquaculture: Jiahu, a settlement occupied from around 7000 to 5700 BC in the Yellow River Basin of Henan Province, in central China. By Neolithic standards, Jiahu was positively cosmopolitan. Archaeologists have unearthed many signs of a complex society, such as flute fragments carved from the wing bones of red-crowned cranes—some of the earliest examples of playable musical instruments, according to The Metropolitan Museum of Art. In other words, if any Neolithic Chinese culture were to have domesticated fish, it would probably be Jiahu.

To search for Jiahu’s ancient fish remains, the researchers excavated the site’s trash heaps using a mesh sieve, to filter them from the soil. “Bones from carp and other things that have been eaten are usually jumbled together in rubbish pits,” Hudson says. The researchers compared what they found at Jiahu to remains from other contemporary sites in China and Japan, as well as modern-day carp from a farm in Japan’s Matsukawa Village.

On land, most species of livestock are physically distinct from their wild counterparts. The skeletons of domesticated sheep, for example, tend to be proportionally smaller and older than those of their wild sheep. This skeletal skewing makes it easy for archaeologists to discern when humans began to rear a given species. But fish bones are much smaller and more fragile than sheep bones, making them far less likely to be preserved. “In fish, such skeletal changes are much less well-known, if indeed they exist,” Hudson says. Instead, the researchers had to work with the best-preserved part of the carp: their pharyngeal teeth, which are harder and thus more likely to survive than bone, he says.

At Jiahu, the researchers found a surprising abundance of teeth from the common carp. Despite the fish’s name, common carp aren’t quite as easy to find as crucian carp, which stay closer to shores and riverbanks throughout the entire year, making them an easier catch. Yet 75 percent of the 588 carp teeth that were recovered came from the common carp.

According to Hudson, it’s relatively easy to extrapolate a fish’s body length from the size of its teeth. When the researchers calculated the probable body lengths of the Jiahu bones, they found an unnatural pattern, which suggested the carp had been farmed. According to prior research of carp bones at other Paleolithic sites in China and Japan, the body lengths thrown out by hunter-gatherers generally formed a bell curve that peaked at 11.8 inches, the average size of a mature adult carp—the kind you’d want to catch and eat. Bones found in the oldest layers at the Jiahu site produced similar body length patterns.

But starting around 6200 BC at Jiahu, the archaeologists found two bell curves, one representing the adult fish and another representing smaller, younger fish. The researchers believe the simultaneous abundance of these two body lengths suggest these fish were not caught wild as adults, but harvested from a pond, meaning that immature fish were caught alongside full-grown ones. This distribution pattern of two common body lengths, adult and juvenile, appeared in excavations of more recent sites with a known history of aquaculture.

The researchers’ findings help to answer a larger question at the heart of early aquaculture: whether domesticated carp were moved from Europe to Asia, vice-versa, or neither, writes Jennifer Harland, an archaeologist at the University of the Highlands and Islands, in a comment in Nature. During the Roman Empire, carp were eaten but likely not domesticated in ponds until the 12th century, according to medieval historian Richard Hoffman in a 1995 study published in Guelph Ichthyology Reviews. Harland believes that the new findings at Neolithic Jiahu suggest the common carp was domesticated twice, once in Asia and once in Europe.

Though the researchers found ample carp teeth at Jiahu, they have not yet found traces of rice paddies. They hope to continue searching for traces of these fields to pinpoint when the rice-fish farming first emerged, as they believe this system—like the domestication of the carp—may be more ancient than previously thought. Today, rice-fish farms are found all across China. In the Ailao Mountains in Yunnan Province, for example, a spectacular mosaic of rice terraces cascade down the slopes and support a variety of carp, including crucian, silver, and, of course, common.

Found: An Elaborate Viking Graveyard at the End of a Fjord

Mark Twain once called the allium the “pride and joy of Bermuda.”
film locations

A new project emphasizes practical designs that may stave off desertification.
Video • Object of Intrigue

2:48
Want to see fewer ads? Become a Member.
From Around the Web
Atlas Obscura Trips
China: The Great Cuisines of the Middle Kingdom
View This Trip
Thanks for sharing!