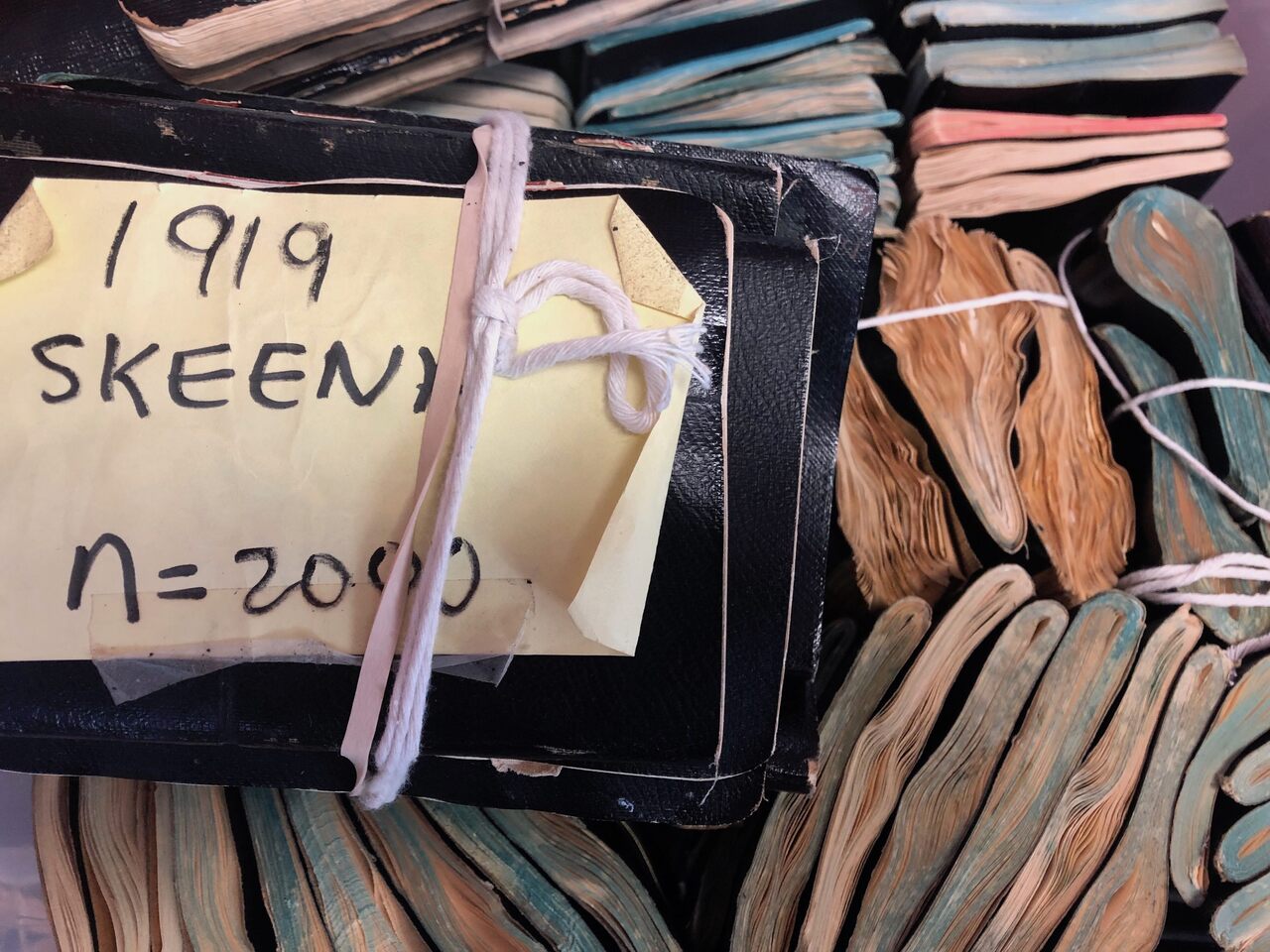 The notebooks had been hidden in a basement for decades. Courtesy of Michael Price
In This Story
Destination Guide

Skip McKinnell found the slim books in a Vancouver basement: stacks of field notes coated with salmon scales still stuck to the 100-year-old fiber with slime. Then affiliated with Canada’s Department of Fisheries and Oceans, McKinnell had read about the notebooks, which allegedly contained extensive data about and samples from British Columbia’s salmon population from the first decades of the 20th century. But even after scouring collections from British Columbia all the way to Washington D.C.’s Smithsonian Institute, McKinnell found the wrinkled pages elusive. That changed one day in 1996, when, at a colleagues’ suggestion, McKinnell searched the Pacific Salmon Commission’s Vancouver basement. There the notebooks were, overlooked but intact. When the notebooks were opened, papery fish scales sloughed off their brittle lined pages and fluttered like moth wings to the ground.

For more than 20 years, funding issues prevented scientists from taking advantage of that informational treasure trove. This year, however, a team of researchers, led by biology PhD student Michael Price of British Columbia’s Simon Fraser University, used the rare data to conduct one of the most historically in-depth available studies of Canada’s native salmon populations.

“The situation is more dire than we realize,” Price says. Local commercial and recreational fishers were already feeling the pinch, with fisheries pouring hundreds of thousands of dollars into farming salmon populations every year. But the team’s findings reveal just how vast this historical loss has been for one group in particular: First Nations Canadians.

First Nations people have a legal right to local salmon, and often rely on salmon for subsistence. “Salmon are this cultural keystone species,” says Holly Nesbitt, a PhD student in Forest and Conservation at the University of Montana, who has studied the effects of salmon depletion on indigenous food security in British Columbia. Price’s new study reveals just how much of this historical bounty Native communities have lost since the establishment of British Columbia’s commercial fisheries.

In conservation studies, in-depth data like those contained in the notebooks are a holy grail. That’s because accurate historical records for wild populations such as salmon are notoriously difficult to find. Available baseline data, used to estimate changes in population, are often colored by decades of human intervention. “For sockeye salmon, which are the most commercially important species, data only go back as far as 1960,” says Price. “That was 80 years after commercial fishing began in the Skeena.” This leads to a problem researchers call “shifting baselines.” By comparing current populations to populations that were already made scarce by modern industry, scientists come to a distorted conclusion about how large an effect economic activities like commercial fishing truly had on wild populations.

In contrast to this normally scant historical data, the information contained in those slime-covered field notebooks was astonishingly thorough. Originally commissioned by the British Columbia government as part of their efforts to monitor the province’s fisheries, the notebooks were the result of 35 years of painstaking data collection. From 1912 to 1948, resident biologists, led initially by fish expert Charles Gilbert, randomly sampled, weighed, measured, recorded the ages of, and shaved the scales off catches from canneries along the Skeena. For Price’s team, the sheer detail in the notebooks was breathtaking: Rows and rows of pencil and ink record the yearly yields from each cannery—a measure of the salmon population as a whole—alongside scale samples pasted right to the page with salmon slime.

While Gilbert likely couldn’t have imagined it, it was this hands-on sampling method that enabled Price’s team to undertake such a detailed study. Using traces of slime, the team conducted DNA analysis to identify which types of salmon those fisheries had been catching. Darlene Gillespie, a salmon expert, examined the rings in each individual scale—yearly growth patterns like tree rings, caused by variation in nutrition levels across seasons—to determine the ages of the sampled salmon. That, in turn, allowed Price’s team to paint a holistic picture of the historical population.

When people see inaccurately conservative estimates of salmon decline, says Price, “We don’t feel the urgency” of population depletion. Yet Canada’s First Nations people have been feeling the urgency of salmon overfishing for years. Economically and culturally reliant on subsistence salmon fishing, the First Nations people of the Skeena river system have a legal right to the fish under Canadian law. But with depleted populations, First Nations people are left unable to to assert this right—and, often, left hungry. Holly Nesbitt partly attributes this scarcity to geography: First Nations people who live further upriver have access to less salmon population diversity than commercial fisheries, which are located at the river mouths. But at root, says Price, scarcity is a result of the historical policy priorities of the British Columbia government. “Economic interest takes precedence over indigenous rights,” he says.

There is some hope: Indigenous-run organizations like the First Nations Fisheries Council and the Lower Fraser Fisheries Alliance have taken the lead to advocate for their legal right to sustainable salmon populations. In 2018, the Skeena Nations, a group of eight First Nations along the Skeena River, took a stand against recreational chinook fishing in the river. The British Columbia government has also recently been proactive, banning recreational sockeye fishing in the Skeena in 2019. But it’s going to take much more concerted efforts to restore natural salmon populations to the level scientists recorded when they began their fisheries study in 1912. That box of scale-filled, slime-stiff notebooks is a record of what is lost, but it’s also a promise. Now that scientists know so many fish once filled Canada’s rivers, stewards of the river can embark on the task of making Skeena salmon abundant once again.

Tristan da Cunha was first inhabited to keep an eye on Napoleon; now residents are looking out for lobsters.
food

For the Quinault Indian Nation, restoring their fisheries is a multi-generation project.
food

Critically endangered, and a much-sought delicacy, the animals are imperiled at every turn.
Video

This restaurant preserves and serves lesser-known and regional Nepali food.
Want to see fewer ads? Become a Member.
From Around the Web
THE GASTRO OBSCURA BOOK
Taste the World!
An eye-opening journey through the history, culture, and places of the culinary world. Order Now