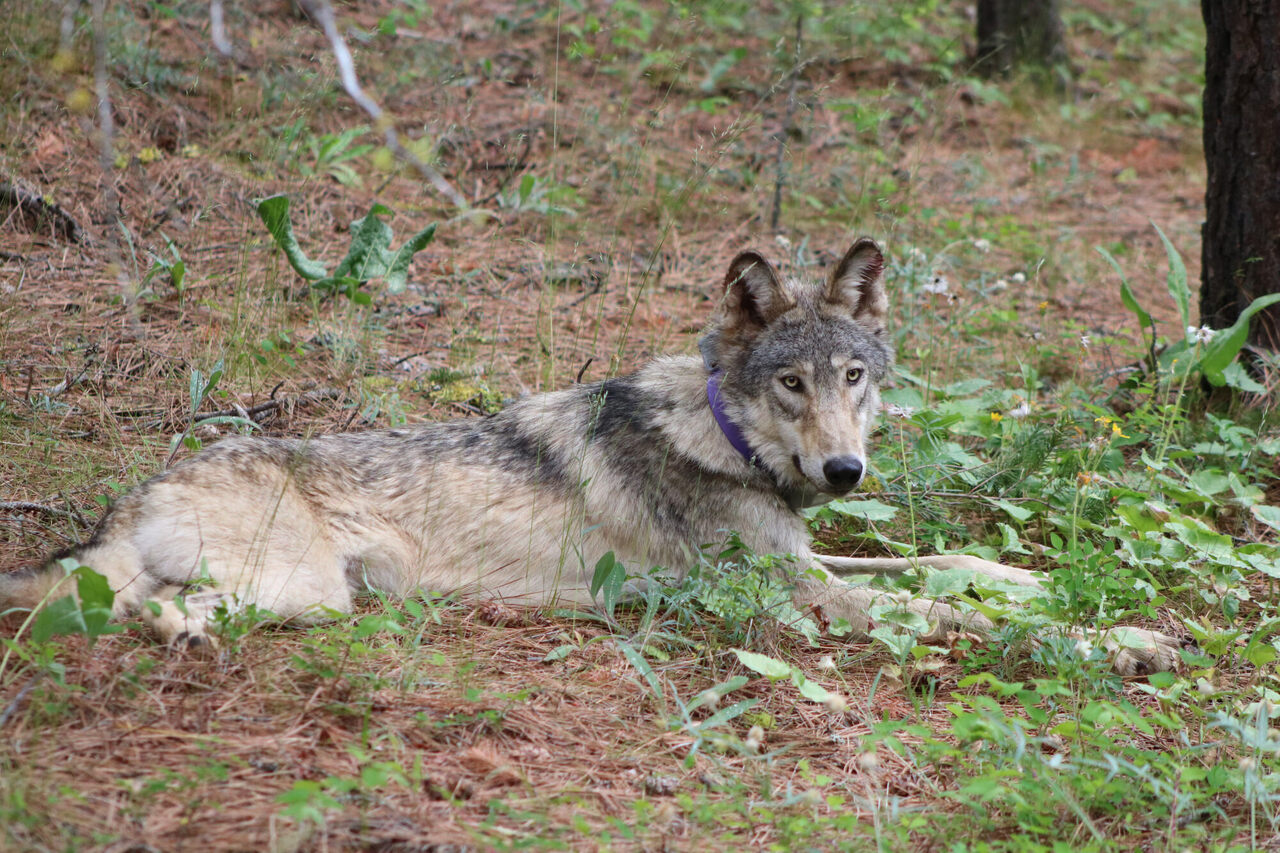 OR-93, the Oregon wolf that traveled to California in 2020. Austin James, Jr., Confederated Tribes of Warm Springs/Courtesy Center for Biological Diversity
In This Story
Destination Guide

A new gray wolf pack has established itself in northern California, retaking a part of the vast territory that the species used to inhabit. The fledgling Beckwourth pack has set down roots in Plumas County, near the California-Nevada border, the California Department of Fish and Wildlife (CDFW) reported in June. Its three members include LAS12F, a two-year-old female wolf born in California, and two others. Wildlife officials are tracking and analyzing the feces of wolves in the region in an effort to identify the lineage of these wolves. “Tracks of two wolves had been observed in the same general area in February,” CDFW said in a statement. “Field efforts are ongoing, and it is not yet known whether the pack is reproductive.”

The Beckwourth pack is only the third to establish itself in California in the last century. These wolves join two other groups of gray wolves in California, heartening biologists and environmental activists who have decried the rollback of state and federal protections for wolves across the western United States, undercutting their recovery after they were nearly hunted to extinction.

Earlier this year, two other young wolves forged an arduous, urine- and scat-scented trail into California. One young male, OR-93, made the longest tracked journey of any wolf over the last century, leaving his home range in Oregon, cutting through the spine of the Sierra Nevada, over northern California lava beds all the way down to California’s Central Valley, and then west to the coast. “He’s the Captain Magnificent of wolf travelers,” says Amaroq Weiss, a biologist at the environmental nonprofit Center for Biological Diversity. “This may be the most concentrated numbers of wolves we’ve seen in California,” Weiss adds. “It’s just incredible—the wolves have basically thumbed their nose at the feds by showing up here, and by continuing to show up here.”

In January, the Trump administration removed endangered species protections from gray wolves and in May, Idaho enacted a law allowing hunters to kill 90 percent of the state’s wolf population. Montana’s governor, who was cited for breaking state hunting regulations when he trapped and shot a wolf, signed a bill that reimburses wolf hunters for their expenses. And in South Dakota, wolves who wander across state lines have been classified as predatory animals that can be hunted and trapped.

In California, wolves remain listed as endangered under the state’s Endangered Species Act, and it is illegal to hunt to kill wolves. But their killing in nearby states—fueled by fears that growing wolf populations would attack livestock—has hindered the wolves’ efforts to breed and expand back into their historically vast territory across North America.

Researchers have found that killing gray wolves doesn’t protect cattle and can even backfire: killing one wolf who poses a threat to cattle can increase the odds that wolves will kill more cattle the next year. Biologists suspect that could be because wolf packs compensate for a death by reproducing more, birthing more pups that may feed on sheep and cows. Moreover, a growing body of research has found that wolves—who generally fear and avoid humans—tend to stay away from people and farms, especially in areas with an abundance of wild prey. Aerial surveys have also found that the long-held belief that growing wolf populations would drive down populations of deer and elk isn’t reflected in reality, though the presence of wolves does tend to drive skittish prey deeper into the woods.

Wildlife biologists still don’t know what, exactly, compels some wolves to break away from their packs and undertake epic journeys across the country to find new territory. What they do know is that wolves follow the paw steps of these trailblazers: sniffing out the scent-markings of other wolves to find new mates and establish new packs. “Wolves transcend whatever concept of beauty and wildness you might ever read in a book,” Weiss says. “When you see them in the wild—their grace, their power and their agility, both when they are chasing prey, and when they’re playing with each other—is just, holy smokes.”

“And that’s why we have to fight to protect them—for the sake of the whole public,” she says.

Discovering the trait may help scientists protect the tuatara, which has been around since the dinosaurs.
animals

The animals face threats from climate change, fishing, and a tourism boom, but their biggest advocate remains hopeful.
snakes

An endangered species is thriving at a once-blighted lot, but climate change and other challenges threaten its future.
islands

The bean-sized snail has persevered despite hundreds of related species going extinct in recent decades.
List