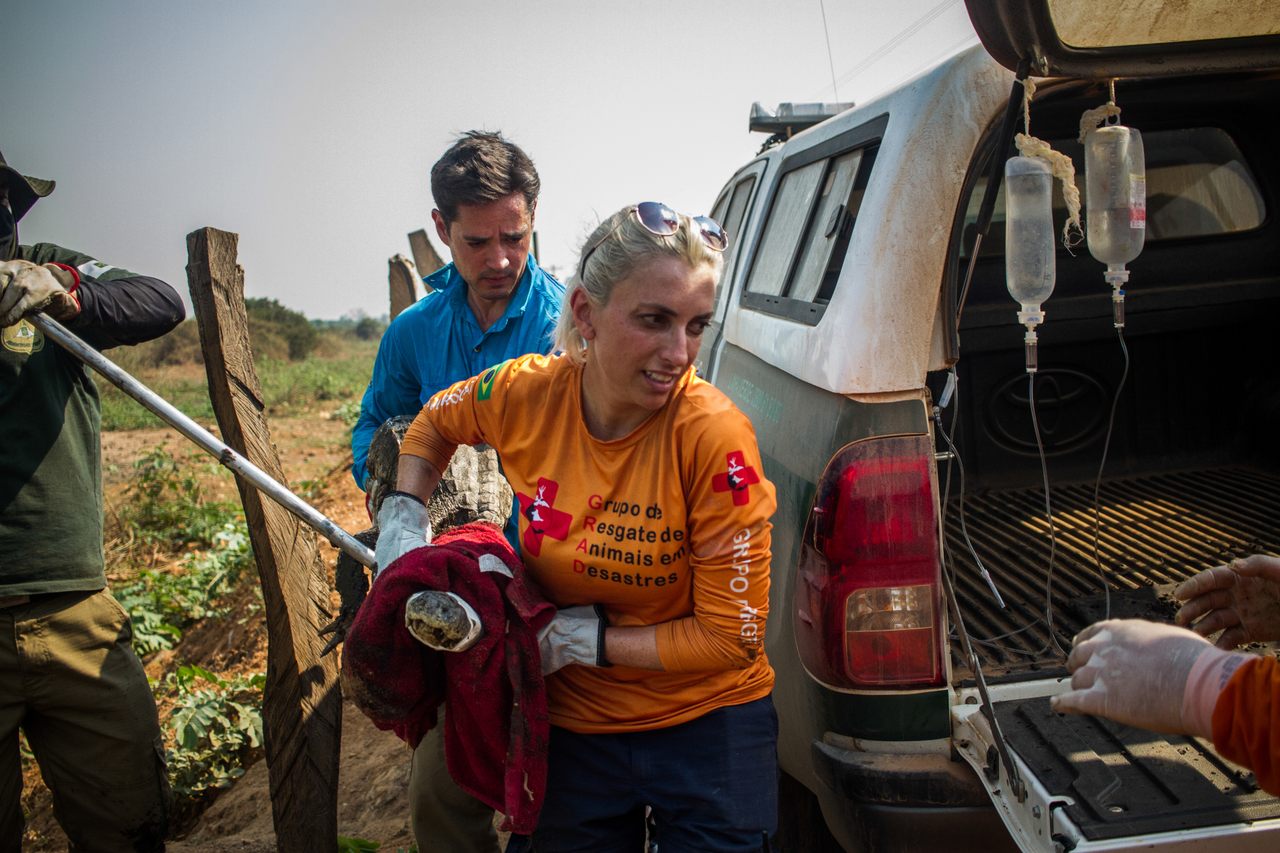 A debilitated caiman is carried by GRAD leader Carla Sassi, on a bridge in Poconé, State of Mato Grosso, Brazil. All photos: João Velozo
In This Story
Destination Guide

It’s 106 degrees Fahrenheit at nine o’clock in the morning in the Brazilian Pantanal, an expanse of more than 70,000 square miles and the world’s largest tropical wetlands. To any Brazilian, the image of the Pantanal is one of ever-green flooded plains, filled with wildlife and fed by rivers that seemed like they never would dry out. But the rivers did dry out. In the midst of the worst drought in 50 years, the wetlands in central-western Brazil have suffered an unusually high number of forest fires. In 2020, 11 million acres of the biome burned, and more than 16 million animals were killed in the Pantanal. Now, the smell of decomposition is heavy in the humid air with dead reptiles, rodents, and buffalos everywhere.

Beneath a concrete bridge, 200 caimans are stranded in a mud puddle that was once a river. These animals are still alive. From the bridge, veterinarian Carla Sassi gives orders and briefs a group of 10 rescuers and five environmental police officers about a rescue operation to take the 50 weakest animals and transport them 30 miles away to one of the few rivers that still has enough water to be habitable. The operation to move the caimans is the first of its kind in Brazil; animals affected by natural disasters are usually left to die.

Forty-one year old Sassi is also a fire brigadier, a firefighter, and the leader and a founding member of the GRAD (Group for Animal Rescue in Disasters), a volunteer group that specializes in providing medical aid to animals during the natural disasters that have hit Brazil over the last decade. Working in disaster response since 2011, Sassi is a trailblazer in veterinary medicine. For the last 10 years she and the other two founding members of GRAD have led the creation of Brazil’s first national plan for animal medicine in natural disasters. They have also developed a model for a veterinarian field hospital and are teaching a program for veterinarians in disaster response.

Since 2019, GRAD has been working in the Pantanal wetlands. What Sassi has seen here upsets and concerns her. “It perseveres against natural events, but against human interference? There will come a time when the Pantanal won’t make it,” she says. “Not just Pantanal, but also all other biomes. Nature is resilient, but…We’re getting to a point of no return.”

Atlas Obscura spoke with Sassi about what sparked her journey into animal rescue, and the challenges of working through the devastating 2021 fire season, which burned an additional 1.7 million acres of the Pantanal.

Was being a veterinarian always a dream?

For sure. I remember being eight and rescuing a bird, its body covered by ants. I ran home with it, took it to a sink. It was a swallow. The ants bit my hand but I was so desperate to save the bird. It died, of course, it was too wounded, but I remember this as a beginning.

What sparked you to help create a group like GRAD?

I saw a woman on television, surrounded by the wreckage of the flood [in Nova Friburgo in 2011] with neighbors throwing her a rope because her house was about to be taken away. She hesitated to go because she had a dog with her. She managed to tie herself up, but once she was safe, the flood reached up and dragged her dog away. When I saw that happening, it just clicked: Who helps the animals in these situations? My friends and I got a truck and [headed there] soon after. There, in Nova Friburgo, something changed for me. I wanted to become a professional in that field because no one was doing it in Brazil. After Nova Friburgo, I started studying with the Civil Defense and firefighters, who worked with human rescue techniques. I adapted these learnings to focus on animals. Animals are different. A person who is awake will normally cooperate with the rescuer, but animals are often stressed out and we need to give them sedatives, which is a very complicated task.

How did the group handle Brazil’s wildfires in 2021?

We mainly rescued animals wounded by the fire. For two weeks we tended to the wounded animals. We couldn’t move ahead of the fire because it’s too risky for the team and the animals, as they might be spooked into the fire itself. It’s very complex work. After the fire is gone, we do a wide [survey] on foot, an exhaustive one. We worked a lot with farm animals, mainly cattle, which were greatly affected, burned, isolated, and left to starve in the mud. They were many. Road kills are also frequent; the animals suffer a lot on the road. It was a huge work to move the caimans from [the bridge], for example, the first operation of its sort in Brazil. To do the work we rented a climatized van to transport the animals without inducing thermal stress. We also administered vitamins, fluids, and medicine so they would start to recover and distributed food, placing feeding points near water spots so animals can eat.

With all the tragedy you have seen, what motivates you to keep doing this difficult work?

In a disaster scenario, we know we’ll lose more than win. That’s the rule. So, each rescued life is a celebration, because death is there all the time. We fight against time, against a government that doesn’t care about animal life, against people who think other things are more important. With the fire, we work to keep it at bay, because if the fire reaches out, so will death. That’s a fact. When it’s a flood, we work hard to teach people how to take their animals with them in emergencies, so that no pets are left behind. We work a lot on that aspect, spreading awareness to promote change and then win more than we lose.

Lauded for her research on gentle giants of the sea, Andrea Marshall is using her fame to find hope for our troubled oceans.
nature

Tragedy set Sicelo Mbatha on a course to understand, and make peace with, the wild on its own terms.
Video • Wonder From Home