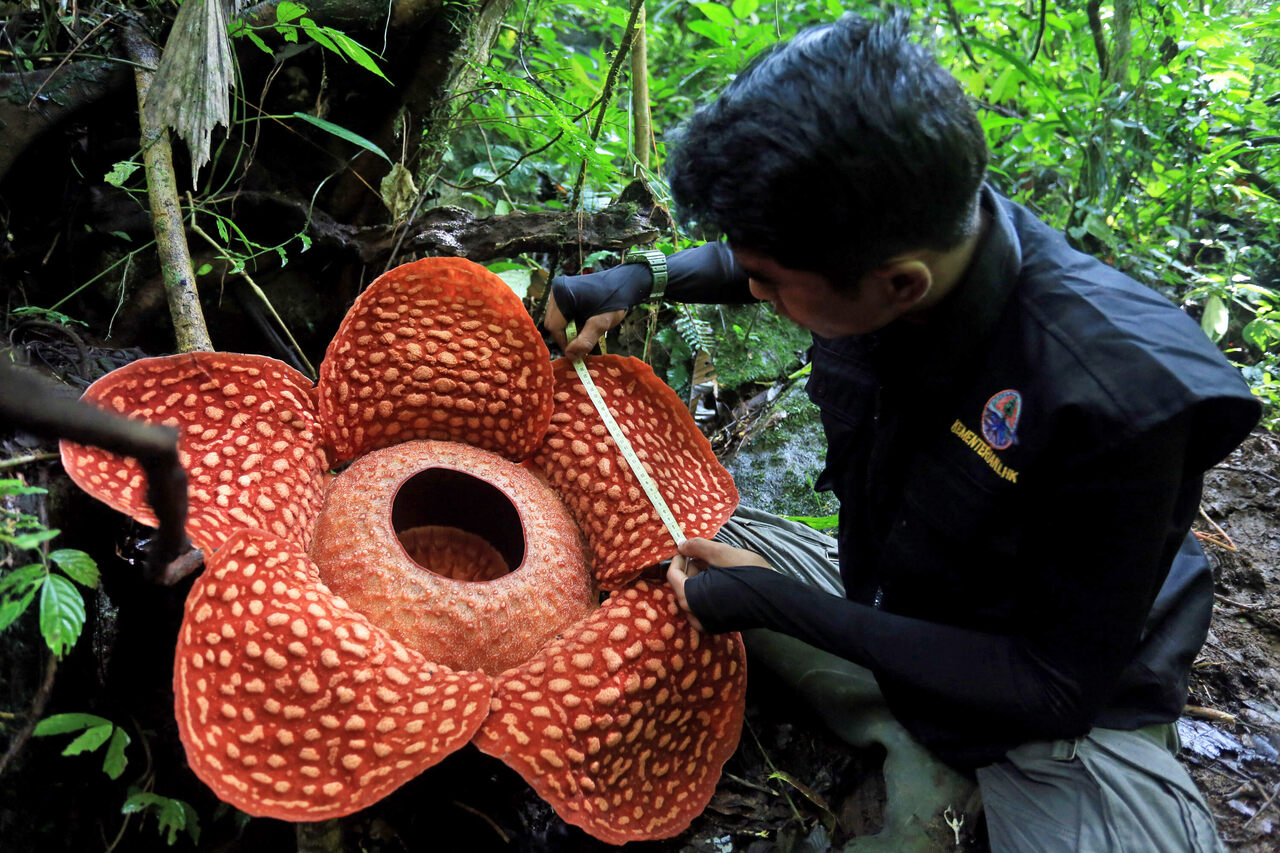 Somewhere in the forests of West Sumatra, Indonesia, on the last night of 2019, a noxious flower was unfurling its petals and letting a really big one rip. The flower in question was a Rafflesia tuan-mudae, often called the corpse lily for the fleshy fumes it emits when blooming. Rafflesia sightings are often noteworthy, drawing crowds as large as 200 to the remote stretches of jungle where they bloom. This particular Rafflesia was also historic: Its bloom, which reached a diameter of 43.7 inches, is the largest ever recorded for the species, according to West Sumatra’s Natural Resources and Conservation Center.

Aside from their unholy stench, flowers in the genus Rafflesia, which lack leaves and roots, aren’t ordinary flowers. They’re parasites, living inside the vines of the genus Tetrastigma. “Rafflesias attach to the body of another, and grow at the expense of that plant,” says Ross Koning, a biologist at Eastern Connecticut State University who manages the campus greenhouse. “They can’t flower until they’ve gotten enough energy from the host, so these plants flower very rarely, and you have to hunt them.” Rafflesia doesn’t just smell like rotting meat, it looks like it too. Its flopping crimson petals are the color of raw venison, adorned with the kind of white flecks you might find on a poisonous mushroom. But the blooms last just a week before they wither and die, Koning says. (Luckily, Rafflesia smells much better dead and rotting than alive.)

Species of Rafflesia are found throughout Southeast Asia, but Rafflesia tuan-mudae is endemic to the island of Borneo, according to a study in the Journal of Botany. In 2017, Indonesian conservationists documented another record-breaking bloom at the same site as this year’s flower—an earlier infestation of the same host plant that was just four inches shorter, according to CNN.

Rafflesia is often referred to as a corpse flower, but it is not the best-known corpse flower. That honor belongs to Amorphophallus titanum, which is endemic to Sumatra and produces the largest unbranched inflorescence in the world. Amorphophallus resembles an enormous green spike extruding from what appears to be a single petal, like an enormous, beet-colored calla lily. Unlike Rafflesia, the Amorphophallus is pretty easy to spot. It first bloomed outside Sumatra in 1889 at the Royal Botanic Gardens, Kew, in London. Since then, cultivated specimens have bloomed at least 287 times around the world, in large botanic gardens and smaller university greenhouses.

At Eastern Connecticut State University, Koning watches over Rhea, an Amorphophallus titanum specimen. Rhea bloomed for the first time in 2008, opening at around 5 p.m. and reaching full bloom at 10 p.m. “That’s when it makes your eyes burn,” Koning says. When he came home after Rhea bloomed, his wife refused to let him enter the house. “She said I had to take my clothes off,” he says. “The stench goes right through your clothing.” Since then, Rhea has bloomed on the regular. A few years ago, Rhea produced a fruit with bright red juice, which Koning did not know teemed with oxalic acid. Unable to stop himself, Koning put a drop of the juice on his tongue. “Oh, it was awful,” he says. “It was like you had thrown a million little needles in my mouth. I never should have done it.”

Botanic gardens keep Amorphophallus specimens because they’re easy to grow; they require a pot as large as a horse trough, Koning says, and some shade. At the Chicago Botanic Garden, botanist Tim Pollak grows his Amorphophallus, Alice, under a patio umbrella. “Like a celebrity,” Pollak says. But no botanic garden in the world has been able to keep any species of Rafflesia. Because the species is parasitic, the garden would need to first grow the Tetrastigma vine and then infect it with Rafflesia and hope things work out. “There are too many mysteries. What nutrients do you need to produce a happy vine, which in turn will produce a happy Rafflesia?” he says. “If you get one to bloom, you’ve made some history there.”

Fast-growing vines like Rafflesia’s host genus, Tetrastigma, can also be a menace to well-kept greenhouses. In his greenhouse in Connecticut, Koning only keeps the slow-growing vanilla vine. He’s learned his lesson, after having to cut out a sprawling thicket of passion vine that shot up into his ladders and scaffolding a few years back. Pollak watches over a Tetrastigma in Chicago, but it’s frequently manicured.

Though a botanic-garden-bound Rafflesia is likely years away, you can still see them in the wild in Gunung Gading National Park in Sarawak, Malaysia. The flowers grow near the camp’s headquarters and near the seventh waterfall, according to Republic World. The parasites have no set blooming season, but they most often appear November through January, according to the Sarawak Tourism Board. One Rafflesia at Gunung Gading is unusually rare, boasting six petals as opposed to the customary five.

If you ever spy a Rafflesia in the wild or an Amorphophallus in a garden, try and take a whiff. (Our advice: Bring a barf bag.) According to botanists, each individual corpse flower carries a unique smell. To Koning, Rhea smells like rotten sauerkraut. Spike, on the other hand, is far less pungent. Pollak says, “Alice smells like a hog farm on a sunny day.” He pauses, then elaborates. “Like manure, ammonia, and certainly dead carcass. Maybe like a dead mouse trapped in your kitchen sink, but definitely not dirty socks.”

What It's Like to Care for the Mighty 'Corpse Flower'

A 'Century Plant' in Chicago Is Having an Epic Growth Spurt

It's outgrown the greenhouse, and it's a big greenhouse.
botanical gardens

13 Beautiful Botanical Gardens Where It's Easy to Lose Yourself

Our readers shared some of their favorite collections of greenery in the world.
Video • Object of Intrigue

In botanic gardens, the lineage of a famously smelly plant is threatened. What can save it?
Read more
Thanks for sharing!