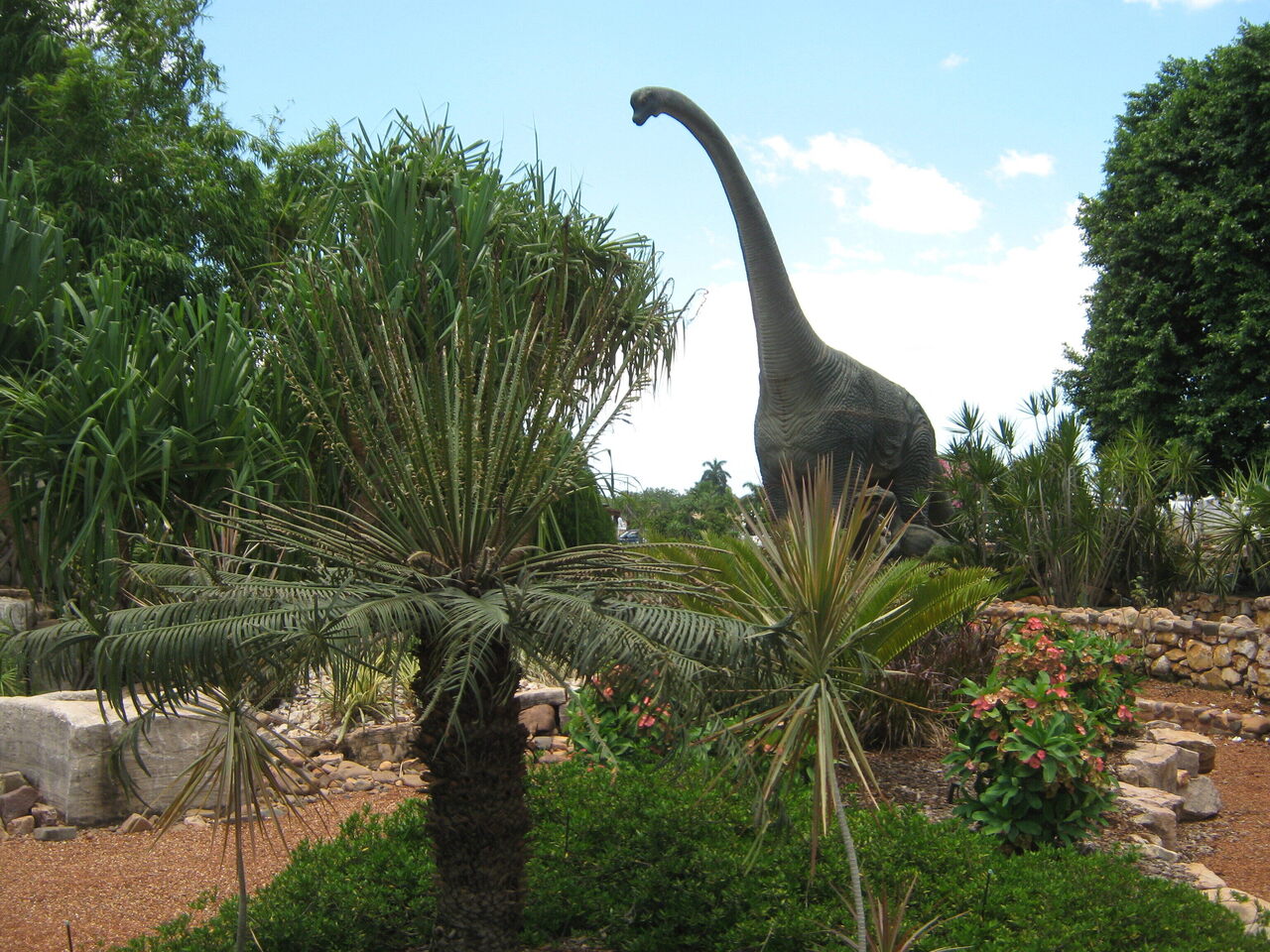 Big Kev, large and in charge. Simon Brown/CC by 2.0
In This Story
Destination Guide

For over a decade, a 60-foot brachiosaurus named Big Kev has stared down all those who drive by the Stuart Highway that runs through Darwin, the capital of Australia’s Northern Territory. He was one of Australia’s many “Big Things,” oversized roadside statues that also include the Big Mango in Queensland and the Big Dead Fish in Victoria. But as of yesterday, Big Kev is no more—at least for now.

Unlike most other dinosaurs, Big Kev is made of plexiglass and just 12 years old. According to NT News, Tom Finlay, the owner of Finlay’s Stone Mason, purchased Big Kev on special order from the Philippines in 2007 for $100,000—a small price to pay for a watchdog of prehistoric proportions. Finlay plopped Big Kev down in Palmerston, a satellite city of Darwin, and took precautions to ensure the dino wouldn’t topple over under inclement weather, hiring a structural engineer to secure his enormous feet into the red soil and cyclone-proof the whole thing.

But when the hardware giant Bunnings announced a $58-million plan to relocate a store to Finlay’s site, Big Kev’s future seemed grim. It’s hard to build a brand spanking new hardware store when there’s a near-to-life-size dinosaur in the way. The community, all big fans of Big Kev, began to fret. “We are considering the future of Big Kev as part of our development application and will update the Palmerston community once a decision has been made,” a Bunnings representative told NT News.

Before Big Kev could be moved, he first had to be disassembled. Per his name, Big Kev is a rather big boy. And like historic Japanese houses and beached whales, Big Kev was simply too big to move in one piece. It’s no easy thing, logistically or emotionally, to dismantle a 60-foot-tall plexiglass dinosaur. So Rory Milner, a site manager, came in specifically to supervise the process and ensure no harm came to Kev.

To dismantle a brachiosaurus, you have to start with the neck. The first crane summoned to dismantle the dinosaur proved too small for the job, so Milner called in a cherry picker to lop off Kev’s head, according to ABC Darwin. Milner planned to dissect Big Kev in eight parts: neck, head, body, tail, leg, leg, leg, and leg. The entire process was scheduled to take four hours, during which time ABC Darwin posted a video titled “Inside Big Kev,” a cinematic exposé of the dino’s hollow guts.

But Big Kev shouldn’t be in pieces for too long. Once the new Bunnings hardware store goes up, the dinosaur will emerge from his warehouse hibernation and be reconstructed somewhere on the site, Milner said. Kev isn’t the only one of Finlay’s statues to have survived a brush with death. On January 4, 2019, a white bolt of lightning struck down Finlay’s hand-carved statue of Venus de Milo, according to ABC News. The statue almost entirely disintegrated in the strike, save for its 66-pound breasts.

Australia is also no stranger to the long-distance dinosaur transport. In 1994, when the Australian Reptile Park decided to move to a new location, there was no question that Ploddy the yellow diplodocus would be coming along. The park held a parade for Ploddy two years later, escorting her on a semi-trailer around half a mile down the main street of Gosford. Over 10,000 people were in attendance.

In Big Kev’s absence, the Darwin City Council, which also oversees Palmerston, may make moves to erect a new Big Thing to boost tourism. As luck would have it, the city is currently blessed with $400,000 unspent funds allocated to public art. Councilmember Sherry Cullen said a “tasteful novelty architecture structure” could be the “facelift” the city needs, ABC reports. The council is reportedly split between whether this new landmark should be big, like Kev or the Mango, or small, such as a swing. Lord Mayor of Darwin Kon Vatskalis suggested the construction of a “big D,” which did not attract a response from his fellow council members. At this time, Big Kev could not be reached for comment.

* Correction: This post previously stated Big Kev was a brontosaurus. Big Kev is a brachiosaurus.

It depends on whether a natural process could explain them.
art

A restoration project has given a once-iconic sculpture a new lease on life.
geology

New research says the megaliths may have been dragged to the site with the help of lard.
dinosaurs

Paleontologists Are Still Digging Into the Origins of the 'Chinese Pompeii'

What we know (and what we don't) about the Jehol Biota.
List

Researchers believe the sailors were commemorating their voyages.
Read more
Thanks for sharing!