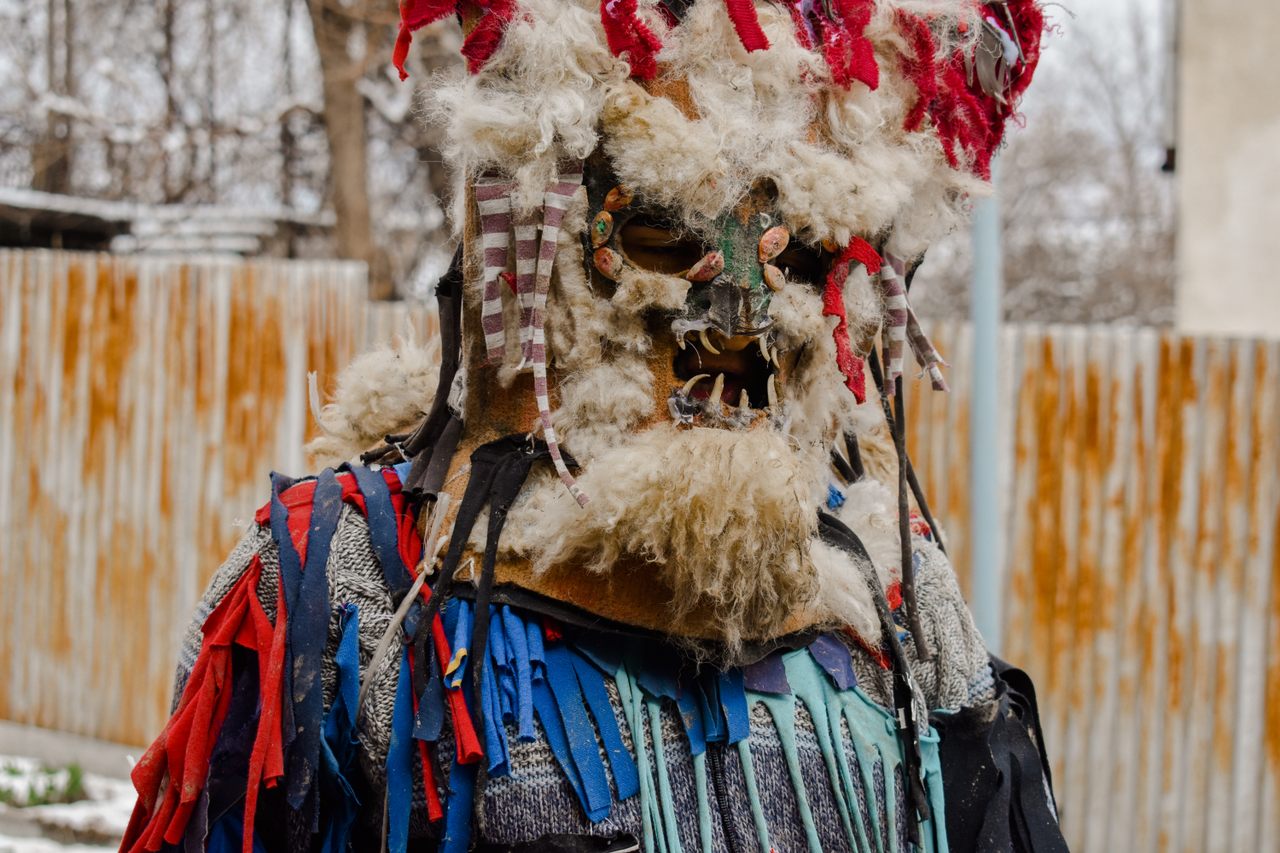 In a handful of villages in eastern Georgia, the ancient spring festival of Berikaoba kicks off with a procession of fearsome, masked berikas. Melanie Hamilton
In This Story
Place

A lively circle of dancers in the Georgian capital commemorates an ancient rite of spring.
Destination Guide

The gang of masked figures came barreling down Didi Chailuri’s main street just shy of 11 a.m. on a March morning. Mud-streaked, screaming, and armed with whips, they brought chaos to the narrow streets of this otherwise sleepy village of about 1,200 people in Georgia’s eastern Kakheti region. But the berikas, as they are known, were not there to stir up fear. Their arrival marked the start of the ancient festival of Berikaoba. The tradition “can be traced to the beginning of (Georgia’s) early farming culture,” says Manana Khizanishvili, curator of Collections of History and Ethnography at the Georgian National Museum in Tbilisi. While its origins have been lost to time, Berikaoba may have started 8,000 years ago. It lives on now, in a small corner of the country, largely thanks to the will of a single woman.

As the berikas continued down the street, shrieking and lashing the pavement with their whips, villagers offered them gifts of eggs, bread, and wine. The offerings, they believe, will increase their chance of having a fruitful spring and avoiding misfortune. In return, the berikas dole out a special greeting, caressing spectators’ faces with their muddy hands. Howling, splashing through puddles, dancing with liters of homemade wine, the berikas—local men in homemade costumes—evoke the energy of a world emerging from the long, cold winter.

“Thousands of years ago, the procession began from a pagan temple,” says Eka Veshapidze, the local Berikaoba aficionado. “And if townsfolk couldn’t provide food or wine, the berikas would run inside the villager’s house, roll around on the floor and effectively curse the family. Afterwards, they might steal a chicken from the yard. Even if it was the last one.”

She adds with a laugh, “We don’t do that anymore. Now we start the procession from our church and have exchanged family curses for toasts of gratitude to the community. We are much more civilized now.”

On this early spring day, the boisterous parade leads to an open field where a small arena awaits. It’s the site of a chidaoba match, an ancient form of wrestling so unique to Georgia that it has earned UNESCO status as intangible cultural heritage. During Berikaoba, the match marks the end of the berikas’ procession and the start of feasting and other events. As most of the villagers watch two burly men wrestle across rust-orange sawdust, vying for the prize of a sheep, others continue to work. Veshapidze stands to the side, near an open fire, skillfully tearing off palm-sized chunks from a massive mound of dough, enough to feed the entire village. She places each in a traditional clay pan to be toasted over the fire, transforming into kada, a slightly crunchy, buttery, sweet bread. The special occasion treat is a favorite of Berikaoba festival-goers, and the woman making it is arguably the reason the festival itself continues.

After Christianity was established in Georgia in the fourth century, many of the region’s pagan traditions, including Berikaoba, began to disappear, either rooted out by the Church or simply forgotten. By the late 20th century, only a few villages in Kakheti, a region mostly known for hilltop monasteries and family wineries, continued to celebrate the ancient rite of spring.

Some 30 years ago, Veshapidze didn’t know much about Berikaoba, other than it was an “ancient folk parade,” she says. Only after she met and married Gela Veshapidze, a local police officer, and moved to Didi Chailuri—one of just three villages that still celebrate Berikaoba—did she witness the berikas in person.

“I remember hearing the screams and watching with horror as the berikas made their way through the village,” she says of the event. Her initial shock quickly faded into something close to disappointment. “Basically, they paraded here for a short time and then the entire village would go to (neighboring) Patara Chailuri for the rest of the festival,” Veshapidze says. “I thought, soon they won’t even do this anymore and it will just be gone.”

As a history teacher, the idea of a tradition that had died out everywhere but a handful of villages fascinated her. She began to research Berikaoba, and understand how deep its roots in Georgian culture were. In the decades since that first encounter, Veshapidze has made it a personal mission to preserve and grow Berikaoba celebrations in Didi Chailuri.

She teaches the history of the festival in her classes, and recruits local students to publicize the event, including creating social media campaigns. Under Veshapidze’s watchful eye, the celebrations have expanded to include wine tastings—a savvy move that, like the other campaigns she coordinates, promotes the village to the outside world. And she has brought back what was once a pillar of the Berikaoba tradition.

Before his wife arrived, says Gela Veshapidze, “It was just the berikas running around and improvising some acts to be funny or mischievous. She truly revived the tradition of folk theater within Berikaoba.” Eka Veshapidze’s research into the ancient festival’s past revealed a number of performances that reflected the political and social realities of their time. One popular Berikaoba play, for example, is known as “The Arab and The Bride.” The plot is simple, but steeped in pagan and political allegory: A Georgian groom at the altar is murdered by an Arab—evoking the invaders Georgia has endured over centuries, including from the Middle East—who steals his bride and, symbolically, fertility. The berikas revive the groom so that he can take back his bride, thus restoring fertility within the village.

“Every year when we celebrate, people not from here will say what a weird thing it is we do,” Veshapidze says. “But I would like to tell them that it’s not some ugly, evil thing. We are not pagan. We are very proudly Christian. But we must preserve our cultural heritage and this tradition is part of that.”

She thinks of Berikaoba as a statue. “For every person who forgets, or abandons this tradition, it is another chip in the statue. And if that continues, then one day there will be nothing left. Not even a plaque.”

The historian behind an online database of eccentric traditions has already visited more than 550 events.
festivals

Every January, This City in Ecuador Fills With Dancing Devils

Diablada de Píllaro is a rebellious but festive answer to a much older tradition begun by Spanish colonizers.
festivals

In Ghana, the New Year Starts With a Fancy Dress Masquerade

Once a colonial tradition, a creative festival has been elevated to new heights.
monks

One of the many traditional dances at the annual Jambay Lhakhang Drup involves performers in masks—and nothing else.
Video • Object of Intrigue