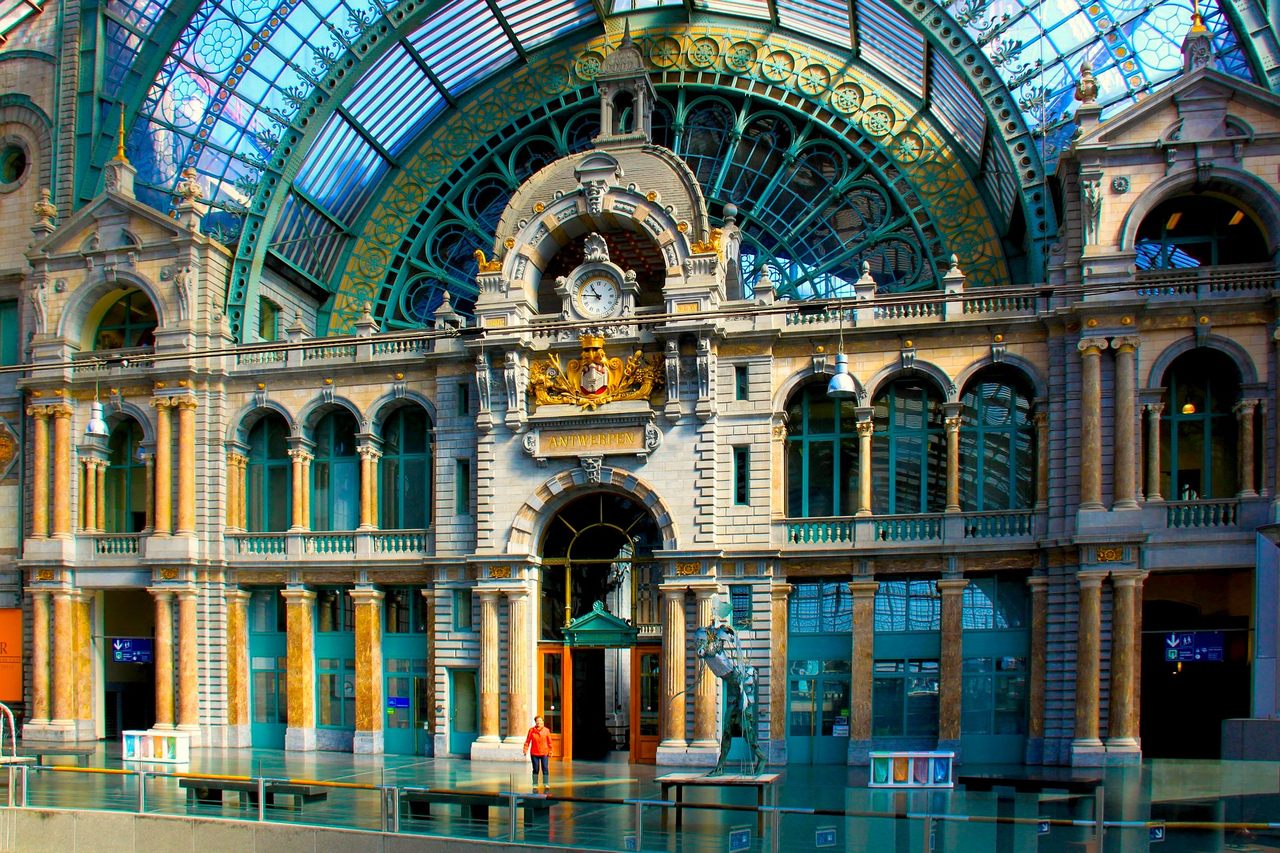 Antwerp Central Station is much more than just another place to catch the train. Funki50/Public Domain
In This Story
Place

This shining multicolored metro station deep under Naples is said to be the most beautiful in Europe.
Place

Train travel rules. In addition to being a wonderfully civilized way to get from here to there, the stations and structures that support railways are often incredible. From ultra-modern, almost futuristic transit hubs to gorgeous historic stations that have been lovingly maintained, all over the world you can find train stations that serve as destinations unto themselves. We recently asked Atlas Obscura readers in our Community Forums to tell us about the most incredible train stations they’d ever encountered, and they came back with suggestions that made us want to book a ticket straight away.

Check out some of our favorite responses below, and if you have an inspiring train station of your own that you’d like to share, head over to our forums and keep the conversation going! Is there such a thing as train-station-spotting?

“Love that you chose Bangkok railway station! I had a six-hour wait there back in 2016, and was not bored for a second watching the people, monks, trains, architecture…” — NJP

“Not only a great transportation nexus (underground, regional trains, sleek Eurostar carriages!), but a vaulting, inspiring piece of Edwardian iron, brought back from the dead a few decades ago like the rest of its neighborhood. It’s attached to a beautiful hotel, some of whose rooms look out onto the Eurostar platforms. Right next door is King’s Cross, where you can see the Hogwarts Express platform. And St. Pancras has witty, memorable art: a bronze man holding his hat while gazing upward, a pink neon love letter overhead, and best of all, a giant couple embracing, epitomizing the bittersweet sense of goodbye and hello that train stations evoke.” — SpiderHugger

“It’s such a beautiful train station! Definitely, the best way to arrive in Antwerp! I took these pictures when arriving in the city last year.” — andreiacalhau

“So many stations I haven’t been to yet, but I fell in love with Atocha Station in Madrid.” — explodingirl

“I found the station in Hua Hin, Thailand to be like stepping back in time. I don’t recall the year that it was built, but I would guess possibly in the 1920s.” — jimminton

“The stations of Naples underground are all decorated by pieces of art, or are pieces of art themselves. Look at the Toledo Station as an example.” — diegotonini

“I was struck by the vast space in the Kyoto, Japan station. When you walk inside, you’re awestruck by the size.” — alinagrafik

“In 2014 I visited Moscow and was amazed by the beauty of the train stations. If only the rest of the world could put so much effort and detail into the designs and upkeep of these places for the public to enjoy!” — justineph

“Cincinnati’s Union Terminal is certainly a great example of the art deco form and one of my favorite buildings anywhere.” — sofarsogood261

“During my first trip to Europe, I started in Italy and rode trains from Florence to Milan and then to the Netherlands. The train station in Milan was breathtakingly beautiful—marble floors, marble walls, HUGE marble columns at the entrance. I was fortunate to have several hours to explore both the train station and the nearby area. A must-do stop if you’re ever in Italy.” — laurawith150globes

“Call me biased, but my hometown station is absolutely adorable. Dunedin Railway Station was built during the city’s heyday as New Zealand’s wealthiest, and fastest-growing city. In an eclectic, revived Flemish renaissance style, the station is constructed of dark basalt with lighter Oamaru stone facings, giving it the distinctive light and dark pattern. The foyer itself is an absolute delight. Although tiny by world standards, this is, in my opinion, an absolute gem and needs to be on everyone’s list of fab stations.” — gedmaybury23

“I love train travel and am generally pretty impressed by train stations, but I’ll mention the peak-tourist station, Jungfraujoch, the highest station in Europe, with its windows on the Alps. What a terrifying thing to construct.” — onoma

“In terms of beauty, I was impressed with Lisbon’s Estação do Oriente as well as its artful metro.” — onoma

“My favorite rail station is definitely York Station. Located in-between London and Edinburgh on the east coast mainline, it’s not well known. It has the nation’s museum of rail and has excellent architecture as well.” — Tibz_Traveller

“Might not be the greatest one, but Estação da Luz, in São Paulo (my hometown) is definitely nice. It was inspired by King’s Cross, and in a relatively young country such as Brazil, you don’t see many antique constructions like this one.” — elokyrmse

When Royalty, Scientists, and Gardeners All Wanted Fake Fruit

Ekiben offers a taste of the country's regional delicacies.
architecture

Found: A Historic Trolley Hidden Inside a House

When Trenton's streetcars came to a halt in the 1930s, one literally found a home.
subterranean

This photographer took on Berlin's entire U-Bahn network, one station at a time.
architecture

Photos From The Lost Penn Station, Where Commuting Was Infinitely More Beautiful