What Secrets Lurk Within a Human-Sized Dome of Bat Guano? - Atlas Obscura
Want to see fewer ads? Become a Member. 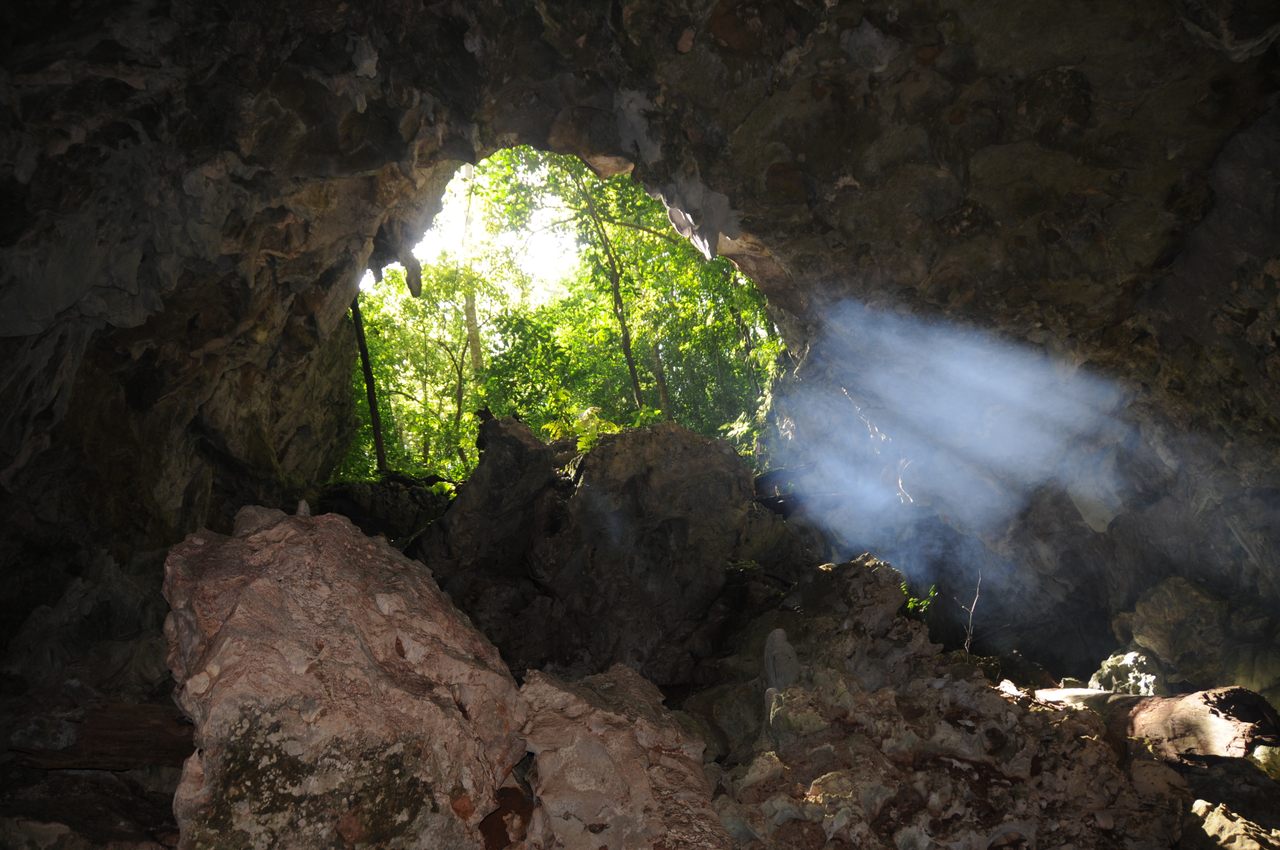 The cave is full of guano. Courtesy Chris Grooms
In This Story
Destination Guide

Geologists know that you can learn a lot about the past from rocks or cores of ice or sediment: Every layer is a chapter of Earth’s story. In an outcrop, eruptions, coolings, and collisions can all be memorialized, in the order they happened. Ice cores reveal clues about past climates, and hold evidence of the rise of industrialization and the nuclear age. The fossils entombed in these time capsules point to some of the creatures that trundled, slithered, or swam across it, and what they ate along the way. This process of tracing deposits over time is known as stratigraphy. And it turns out it’s a great way to study big mounds of poop.

That’s what Lauren Gallant, a biologist at the University of Ottawa in Canada, found when she and a handful of colleagues sliced up a deposit of bat poop piled high in a Jamaican cave.

Humans dubbed this crevice, in the parish of Trelawny, Home Away From Home, but bats have claimed it as theirs for thousands of years. Five thousand or so of the creatures, spanning several species, roost there now, zooming in and out to feed and urinate on researchers camped close to the rocky mouth. There’s no way to know exactly how many bats ever took wing inside the cave, but it’s a lot, and the smell is proof of how long it has been their domain—and toilet.

The cave’s humidity approaches 100 percent, and it’s so suffused with ammonia that researchers must wear a breathing apparatus when venturing inside. Because the bats have long used the cave as a cesspit—and no nightsoil men have unburdened it—heaps of guano have accumulated over several millennia. Even getting close to these deposits is a feat: Researchers must rappel into the cave, tools in hand. Gallant didn’t make the trip down, but she has heard some unsavory stories. The feces-filled cave is “warm and sticky,” she says. “I can’t imagine it was much fun.”

The scientists who journeyed in set up at the tallest deposit and used trays to carve thin slabs out of the mound, resulting in samples representing more than four feet of the feces mountain. The core was striped with various hues of orange and brown, lighter at the top and darker at the bottom. The top layers were liquidy, but when Gallant’s team freeze dried the sample back at the lab, they turned fluffy. The bottom layers—the oldest ones—were denser and stickier. Dried, they recalled a “finer-grain sand, as opposed to fluffy guano dust that static-clings to everything while you’re moving it around,” Gallant says.

The work was a smelly hassle, but well worth it. Scientists can learn a lot from poop. Researchers excavate old human latrines to study historic diets and microbiomes, and during the COVID-19 pandemic have surveilled sewage to look for outbreaks. Feces, especially from animals, can also help scientists reconstruct long-gone landscapes. In April, researchers writing in the journal Nature Plants described how the fossilized, pollen-studded poop from a prehistoric beetle, Pelretes vivificus, helped sketch out the relationships between ancient insects and the early flowering plants of the Cretaceous.

Since different species of bats eat various types of food, from insects and tiny mammals to nectar, fruits, and blood, Gallant’s team suspected that the guano could help them suss out the diets of bats that had occupied the cave over the last 4,300 years. They also collected samples from living creatures that flew into mist nets they had hung in Belize: little brown pellets or colorful fruity deuces, with seeds suspended in a clear, mucusy gel. The samples from living species were “our check and balance, really,” Gallant says.

The researchers studied the old Jamaican pile in narrow slivers, analyzing it for stable carbon and nitrogen isotopes and compounds known as sterols and stanols, found in animals and plants. All offer clues about diets: The poop dropped by bats that feed on fruit has different concentrations of these isotopes and compounds than the feces from bats that hoover up insects. The team concluded that fruit-eating bats were the cave’s primary poopers between 1000 B.C. and 500 B.C., and then again between 700 and 1900.

In a paper about their research, recently published in the journal JGR Biogeosciences, Gallant and company lay out two possible explanations for those spikes in fruity poop. Either the cave was home to more fruit-eating bats during those periods, or insect-eating bats expanded their palates and were also gobbling fruit. “There is evidence that those periods were warm and dry, favoring fruits over insects,” Gallant says.

Given that there isn’t much other research about Jamaica’s loads of guano, this paper will be useful, according to Alexandra Tsalickis, a graduate student at Clemson University who has also studied guano cores but wasn’t involved in this research. The carbon and nitrogen data can also be harvested by scientists pursuing paleoclimate research, Tsalickis writes in an email. “Fresh guano should be collected in Jamaica to compare to the Jamaican core,” Tsalickis adds.

Getting more specific might entail looking for DNA in the guano—if any survived—or looking for dietary markers such as fatty acids or even insect parts. “I think it would involve just kind of throwing even more variables at it to see if you can infer any more information about composition,” Gallant says. Tsalickis encourages the team to look at deuterium, a hydrogen isotope, to learn more about how moisture fluctuated over time. “One guano core can lead to many other scientific questions and research opportunities,” says Tsalickis. “This is the beauty of bat guano research.”

Jo the deer offered researchers a look into migrations and how long it takes deer to visit a forest after a fire.
forests

The Hoopa Valley Tribe’s wildlife division maintains some of the most detailed documentation of fishers in North America.
Video • AO Docs