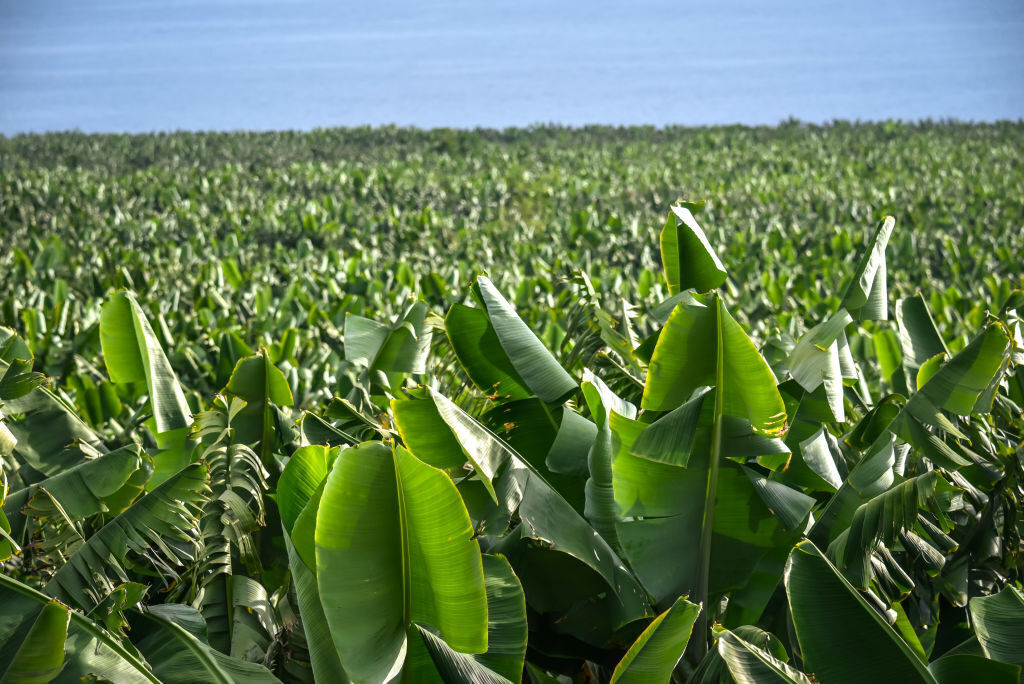 California’s deadly, damaging wildfires worsen by the year. The state’s naturally dry landscapes, parched by a changing climate, have turned into tinderboxes. A stray match or lightning strike has the capacity to incinerate forests, fields, and neighborhoods. Last year saw a summer and fall of choking smoke and blood-red skies over huge portions of the state.

To avoid fiery disaster, local governments often clear away dried brush from the hillsides and fields surrounding homes and streets. But one professor has a rather bananas idea: Barath Raghavan thinks growing groves of banana trees around towns and cities could help halt these now-yearly tragedies.

Raghavan, it has to be said, does not teach horticulture or a related subject. Instead, he’s a computer scientist at the University of Southern California. He’s worked on networks and systems for institutions as large as Google and as small as startups. But his other love is gardening. He’s a member of the California Rare Fruit Growers organization, and he currently grows 150 different edible plants in his yard, as well as the yards of his friends, family, extended family, and in any public patch of land he can find.

A decade ago, Raghavan combined his interests by researching how computing could make agriculture more sustainable. But he first hit on the idea of using banana trees as a firebreak two years ago, during an October fire whose name he doesn’t even remember, since they happen so constantly these days. (It was likely the devastating Kincade Fire.) After corresponding with Michael Kantar, an agricultural and plant breeding professor at University of Hawai’i at Manoa, Raghavan hashed out a theory: that banana forests in fire-vulnerable areas could serve as a green buffer against the flames.

Banana trees, Raghavan explains, are special. For one, they aren’t wood. In fact, they aren’t even trees; they’re herbs, albeit herbs that can grow 25 feet tall. With juicy, sap-filled stems rather than trunks, they are vastly more fire-resistant than grass or trees. The fire resistance extends to other parts of the plant as well. “If you go on YouTube and you search for banana leaves, you’ll find videos of people taking a banana leaf and putting it straight over their gas burner,” Raghavan says. “The leaf will wilt, but it usually doesn’t catch on fire.”

Raghavan has theorized that groves of banana trees, irrigated with recycled water, could shield fire-imperiled communities just long enough for firefighters to get a handle on a blaze. The California wildfires of the last few years were hot enough to turn even fire-resistant bananas to ash, but, Raghavan points out, it would take a long time for even a wildfire to sear through a dense banana grove. “Eventually, once the temperature gets high enough, anything will burn because it’ll completely desiccate,” Raghavan says. “But it won’t be a source of fuel, is the key thing.”

To hear Raghavan describe it, it’s a plan with practically no downsides. Planting protective bananas could slow down fires, pay for itself with the banana sales, and thrill local residents. Bananas, after all, are “sort of a charismatic species,” he says. “It’s the panda, the polar bear of the plant world or the fruit world.”

To prove this would work, Raghavan built a computer simulation based on the destructive Tubbs wildfire of 2017. Raghavan plugged in different figures, from how far the banana grove should be situated from a community to how many meters deep it should be for maximum protection. For a fire the size and speed of the Tubbs blaze, an excellent “banana buffer” would be an orchard 300 meters, or 984 feet, deep. “You wouldn’t completely stop [the fire] because eventually enough embers would get thrown over,” he says. But slowing the fire would give firefighters more time for containment and rescue efforts.

The next step, he says, is testing the model on some real bananas. Growing and then burning a grove of bananas, he says, will take place in Hawai’i, where permitting is easier. Once the test gets going, though, it shouldn’t take long for the bananas to reach maturity. “The return on investment is pretty quick, which is one of the big selling points of bananas,” Raghavan notes, imagining how municipalities could sell or distribute the actual bananas. But most importantly, he says, “the firebreak potential is almost immediate.”

No government entity has reached out about protecting their municipalities with “banana buffers” just yet, but Raghavan doesn’t mind, because he wants the data in hand to make his case first. It has been tried before, though. Los Angeles’s “Banana Man,” Doug Richardson, who previously grew the only significant banana orchards in Southern California, once surrounded a customer’s property with 1,500 banana trees to protect it from potential fires.

Raghavan acknowledges that his dream of banana-based firebreaks might strike people, especially fire-fighting professionals, as downright crazy. There are stumbling blocks: the availability of water, the maintenance of the orchards, the potential for undergrowth to burn. But Raghavan is blunt. “It’s like, well, nothing else is working. We’ve got to try some crazy things.”

The Unsung Ranger Behind the U.S. Forest Service's Iconic Signs

The recipe for "Flying Jacob" was the improvised creation of an air-freight worker.
food

When New Yorkers Were Menaced by Banana Peels

They slipped and fell. Really!
islands

One Man’s Quiet Quest to Collect Every Local Banana

In American Samoa, some delicious varieties are getting harder to find.
Video • Wonder From Home

An eatery within a Bay Area Buddhist temple pulls off all your favorite Vietnamese classics without the meat.
Los Angeles, California

The Internet Age began with a transmission from this biker bar.
Want to see fewer ads? Become a Member.
From Around the Web
Travel With Atlas Obscura
Are you a curious traveler?
Join local experts in 50+ destinations for a once-in-a-lifetime journey.
View Our Trips
Thanks for sharing!