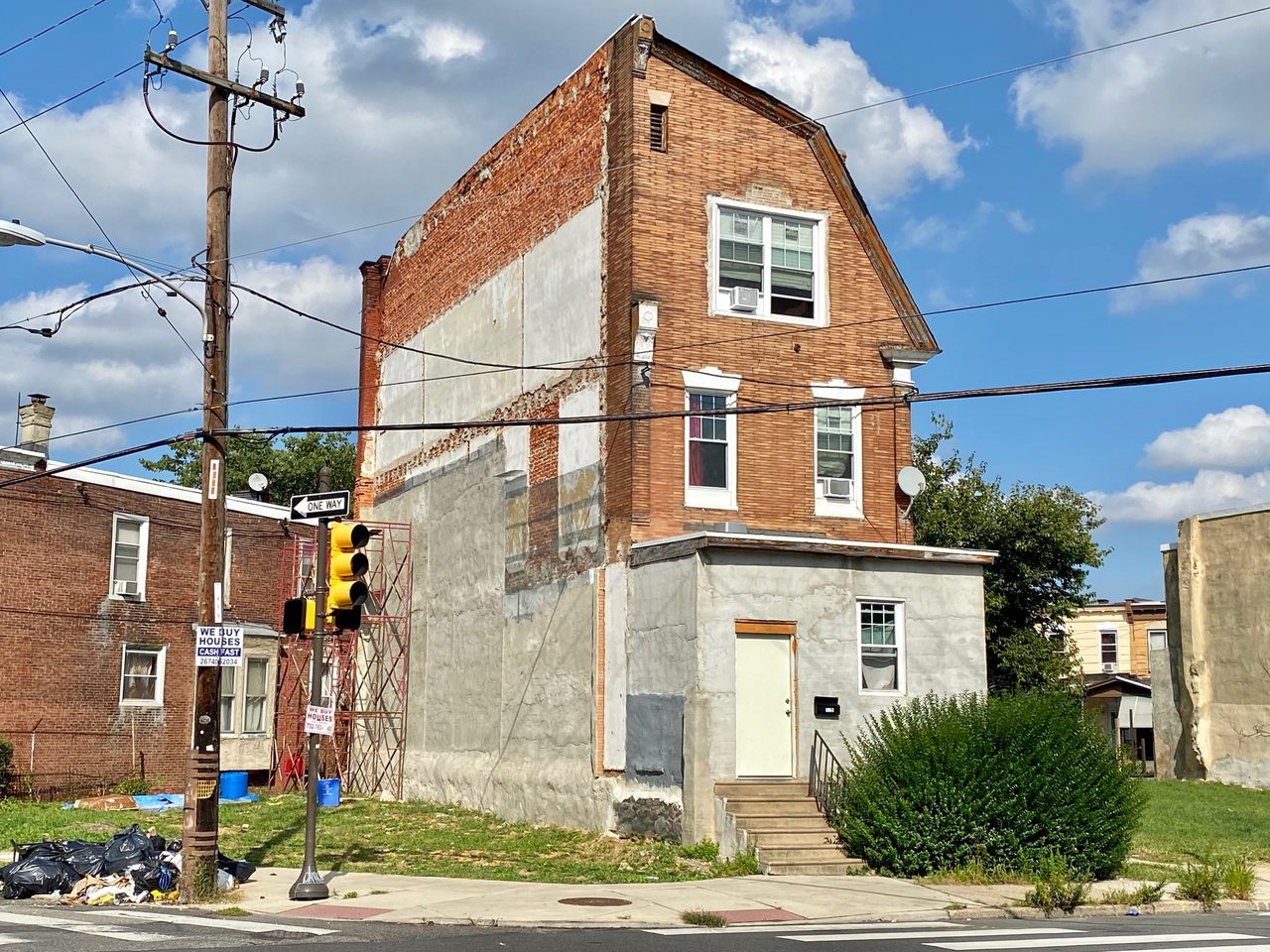 This Philadelphia building still tells the story of its former neighbor. Michael Bixler, Building Ghosts
In This Story
Destination Guide

Molly Lester was walking around north Philadelphia a few years ago when she saw a ghost. The specter was haunting the alabaster remains of 1513 North Second Street, a former townhouse. Lester took a picture, the first of what has become a spirited collection of Philly building ghosts—the imprints of demolished rowhouses that linger on their neighboring buildings’ exterior walls.

This particular apparition included a white plaster outline where there had once been three floors of rooms, stairs, and built-in closets. As an architectural historian and preservation planner, Lester usually studies buildings that are still around—but she was intrigued by this shadowy stencil. She wanted to mentally reconstruct this invisible house and learn more about the people who once slept under its now-obliterated roof.

“Building ghosts are a fascinating way to get a sense of an interior life of a place that, when it’s standing, you really don’t get to see,” says Lester, who imagines the private dramas that once unfolded behind walls that are now public-facing.

These apparitions can be ephemeral. When Lester returned to visit this particular phantom a year later, it had vanished, covered by a new single-family home. So she began keeping track of ones she came across, and recently launched a more structured, citywide effort. Using a grant awarded in spring 2020 by the Sachs Program for Arts Innovation at the University of Pennsylvania, Lester and her co-ghostbuster, photographer and journalist Michael Bixler, recently took a census of all the building ghosts visible in Philadelphia during a four-month period from September 2020 to early January 2021.

Bixler photographed the buildings and Lester mapped them out, and will research the structures using paper records including deeds, city directories, and census information, plus the archive of photos on Google Street View, where it’s often possible to toggle between several years of images. And she plans to take oral histories from neighbors who might remember the people who lived in the lot down the block. The finished inventory will be published as a website in spring 2021, and maybe later, as a book.

After wrapping up their ghost hunting a couple weeks ago, Bixler and Lester tallied over 200 ghosts and photographed 137. The duo found most of them on their own, with Lester driving block by rowhouse block. They also received occasional tips from their architecture-loving circle of friends and strangers on Instagram.

Some of the buildings have been especially visually memorable, retaining what Bixler calls “traces of life”—lasting personal touches like moldings and colored paint from a demolished home visible on the exterior wall of the rowhouse next door. “One home in North Philadelphia still had vibrant, lime green wallpaper from the 1960s,” he recalls. “And a poster of rapper Sean ‘Puff Daddy’ Combs still hanging.”

Others stand out because of their history. One of Lester’s favorites is an ornate ghost at 1935 West Diamond Street, designed by prominent 19th-century Philadelphia architect Willis G. Hale. Some of the original tilework is still stuck onto what used to be the foyer. “What can we still learn from this ghost and from his design, and how people adapted it over time, that you wouldn’t be able to see otherwise?” asks Lester. The building on which the ghost is imprinted is the only one left on this block of 10 Victorian homes that Hale designed, constructed around 1887. The ghost provides extra clues about the other nine that have since disappeared.

Lester also asks why Philly has so many of these. Building ghosts show up in many cities that have historically had lots of rowhouses or attached buildings. Many northeastern and midwestern American cities have them, including New York, Boston, Baltimore, and Chicago. Donald Friedman, an architectural preservation consultant who cofounded New York-based Old Structures Engineering, explains that masonry-walled rowhouses were a 19th-century phenomenon and became much less common after around 1910.

Philadelphia has been a rowhouse city since its 17th-century beginnings, so it had a long time to rack up the kind of attached housing stock that leaves building ghosts behind. But where they surface, and how long they stick around, is another story altogether. Some ghosts, like the one Lester first saw in north Philly, are covered up quickly in gentrifying neighborhoods undergoing rapid change. Others are stuccoed and covered with murals, and still others hover for years or decades in neighborhoods that haven’t seen new construction in a while. In that way, these architectural relics reveal hints of civic investment and divestment, redlining and erasure. “It’s a loaded question, in either scenario,” Lester says. “As we map them and learn more about them, we will hopefully understand more about the relationship between building ghosts and these larger themes.”

Beyond the development of shiny new townhouses, there are other reasons why building ghosts are being exorcised from the cityscape, and why current buildings won’t haunt future residents in quite the same way. Most American states have adopted the International Building Code that was introduced in 2000, which mandates a gap of a couple inches between adjacent buildings to prevent the pounding of neighboring structures with different frequencies during an earthquake. “It only applies to new buildings,” Friedman notes, “but it eliminates the conditions that could create ghosts on these buildings in the future.”

As building ghosts disappear from the urban environment, Lester finds them even more precious. She has looked at her hometown differently since spotting that architectural apparition years ago at 1513 North Second Street. Now, she discovers new things with each one. “Once people start to notice them, it really becomes a fun way to experience a city,” she says. “It makes you think about what you’re not seeing, what was there before.”

The Enduring Haute Couture of a 466-Year Old Kimono House

During the winter months, the iconic French site casts a perfect shadow on a bay full of history—and quicksand.
abandoned

Built from recycled materials by an eccentric con artist in the 1930s, the curious creation was demolished—and then reborn.
islands

A rich local history has long been overshadowed by a few months under a Russian flag.
architecture

An architect has worked to save Aliano's unusual facial features, thought to ward off the "evil eye."
Video • AO Docs