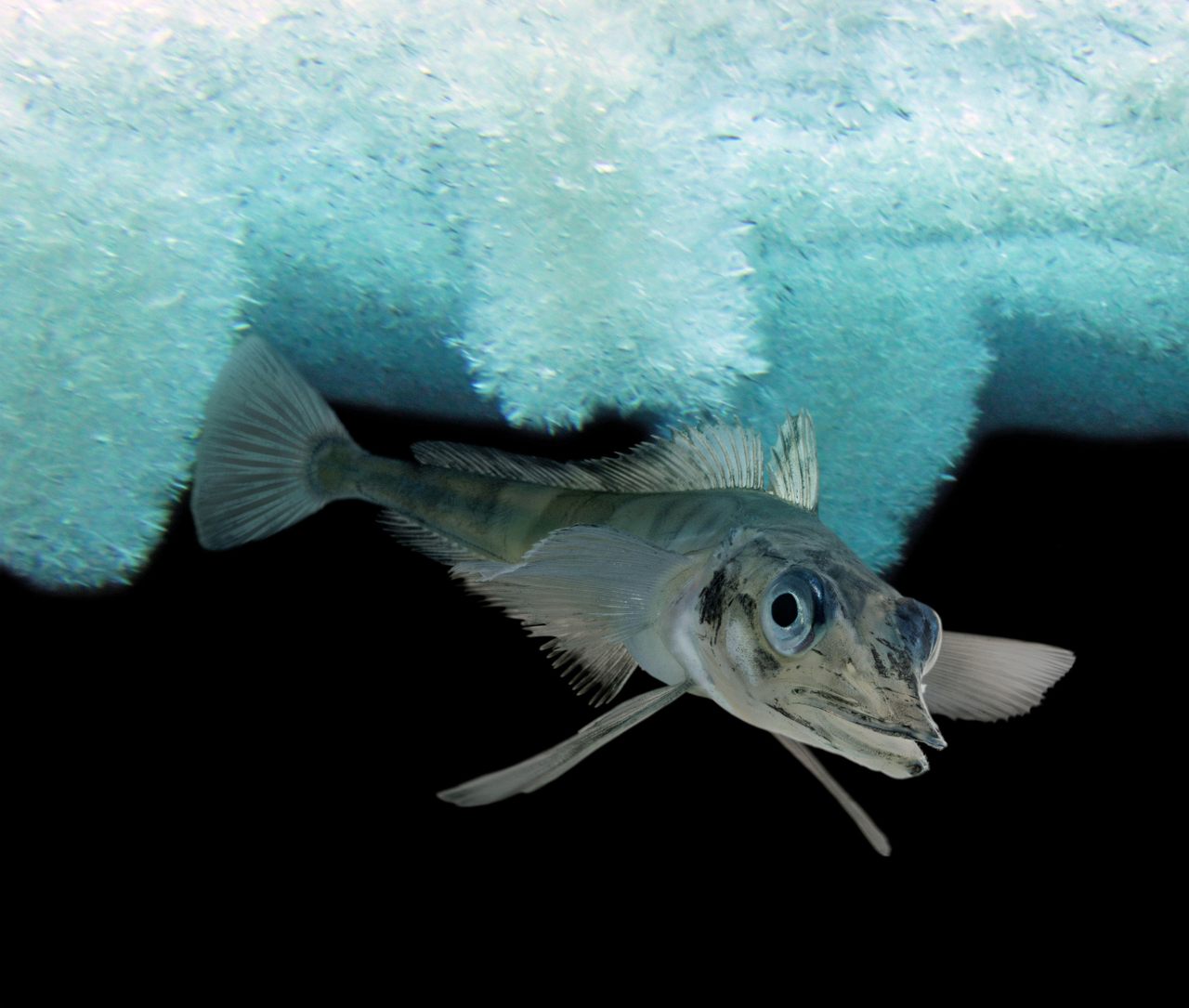 In Antarctica, the aptly-named icefish survives extreme cold thanks to an unusual suite of anatomical oddities. Pally/Alamy
In This Story
Destination Guide

This story is excerpted and adapted from Bill Schutt’s PUMP: A Natural History of the Heart, published in September 2021 by Algonquin Books of Chapel Hill. All rights reserved.

Winter is coming, and when it arrives, most organisms can’t simply throw down the snow shovel and head for their warm homes. Many have evolved unique mechanisms to deal with exposure to cold temperatures and the stresses that accompany them. For warm-blooded species, including those that do wield snow shovels, the body compensates for low external temperatures by working to hold internal temperatures relatively steady. Normally, our body temperature is maintained at around 98.6 degrees Fahrenheit. Primarily, this occurs as an indirect result of metabolic processes like digestion and muscle contraction, since each produces heat as a byproduct of its chemical reactions.

Something very similar occurs when you turn on your car engine. Gasoline contains chemical bond energy. When mixed with air and ignited in a small space (one of your car’s cylinders), a controlled explosion results and the chemical bond energy is converted into the mechanical energy that spins your tires. Since no energy conversion is 100 percent efficient, some energy is lost during the process, here in the form of heat. You can demonstrate this yourself by asking someone you don’t like to place a hand on your car engine a few minutes after starting it. What they feel is the energy that has been lost during the conversion from chemical to mechanical energy. You can explain this to them once they stop screaming at you.

In the body, as heat is released, mostly during muscle contraction, it radiates out of the tissues where the reactions take place and into the adjacent thin-walled capillaries, warming them and the blood within. The warm blood flows back to the heart and is circulated throughout the body. As that happens, the heat leaves the blood and moves into the cooler surrounding tissues.

But what keeps the temperature of the human body constant? Why don’t our bodies cool down when we step outside on a cold morning? The reasons relate to a section of the brain called the hypothalamus. The hypothalamus is the command center for the autonomic nervous system, the portion of your nervous system that regulates most bodily functions without your conscious input. Those include the maintenance of the body’s internal environment, including body temperature.

Upon receiving nerve impulses from temperature receptors in the skin, the hypothalamus acts as a sort of thermostat to keep the body temperature stable. Detecting frigid temperatures, the hypothalamus initiates the previously described shunting away of blood from the peripheral structures like the fingers and toes. It also reduces blood flow to the skin, where superficial blood vessels allow heat to be quickly lost to the environment. Additionally, the hypothalamus sets up a series of involuntary heat-releasing muscle contractions, better known as shivering.

Interestingly, some temperature receptors in the skin “learn” to ignore inconsequential stimuli, which explains why stepping into a hot shower might be painful at first, but then becomes comfortable. The phenomenon is known as thermal adaptation. Something similar occurs on a tactile level when you put on socks. Initially, the brain receives signals from touch and pressure receptors in the skin of the feet and ankles, and you feel your socks being pulled on. Very soon, though, the nervous system begins to ignore these unimportant tactile stimuli, allowing you to concentrate on more important things, like making sure that you’ve put on socks that match. Sensory adaptation can also be related to smells or sounds. Fortunately, this process has its limits. For instance, the nervous system doesn’t adapt to stimuli that can be harmful, like putting on a sock with a burr inside or increasing blood pressure.

The ability to internally maintain stable body temperature is known as endothermy, and those that exhibit it, like mammals and birds, are endotherms. This ability differentiates them from ectotherms, like fish, amphibians, and most reptiles. These so-called cold-blooded creatures require externally supplied energy (usually from the rays of the sun) to keep their bodies at a temperature at which tissues and organs can function properly.

Regardless of how consistent body temperature is maintained, it’s important that it be maintained. The myriad chemical reactions (that is, metabolic processes) taking place in the body can occur only when things like temperature are held within a very specific range. So how do ectotherms deal with the cold, specifically temperatures that would normally freeze their bodies and the liquids like blood found within them? For nearly all of them, the answer is hemoglobin.

Hemoglobin is an iron-containing molecule whose primary function is to pick up oxygen in the lungs or gills, then transport it and drop it off in the tissues. And, yes, a byproduct of this oxygen/hemoglobin interaction is the distinctive red color of vertebrate blood. But for those of you who might be wondering if there’s an exception to the red-blooded vertebrate rule, the answer is also yes, and that blood belongs to the Antarctic icefish (family Channichthyidae). Known to 19th-century whalers long before researchers snagged one in 1928, icefish are the only known vertebrates that lack hemoglobin as adults. Because of this, their blood is nearly clear.

I first heard about these unique creatures during my three-semester tenure as an undergraduate marine science major at Southampton College on Long Island. Howard Reisman, my ichthyology professor there, taught me that icefish blood not only lacked hemoglobin, but it also contained a unique array of antifreeze proteins that allowed the fish to survive in temperatures that would normally freeze a body solid. Similar to the antifreeze in a car radiator, these substances function by chemically lowering the temperature at which freezing occurs. In the icefish, the antifreeze proteins restrict the growth of ice crystals in tissues, including blood, and in hollow structures like the heart and blood vessels. This opens some exciting avenues to medical researchers, who are experimenting with using antifreeze proteins to prevent damage to tissues and organs that are stored on ice before their use in transplants and related procedures.

Interestingly, this characteristic led a European food company to patent a strain of yeast that had been genetically modified to produce the very same antifreeze proteins found in icefish blood. In an amusing twist on the original function, the company currently uses the stuff to prevent crystals from forming in ice cream. More specifically, the edible antifreeze spares frozen dessert munchers from having to deal with the crunchy ice that can form when ice cream’s tiny crystals melt and then refreeze into larger, less palatable crystals. The antifreeze proteins work by latching on to the surface of the smaller crystals, thereby preventing them from clustering together into jumbo chunks.

Admittedly, my primary interest in icefish blood had nothing to do with improving mouthfeel for ice cream lovers. Instead, I wanted to know how icefish were able to evolve this weird bit of biology and still obtain enough oxygen to survive. According to University of Alaska Fairbanks icefish expert Kristin O’Brien, the explanation involves their habitat and a related quirk of physics, as well as their anatomy and behavior.

Icefish inhabit the deep waters of the Southern Ocean, also known as the Antarctic Ocean, since it encircles that particular continent. There are relatively few fish species living there and even fewer predators (mostly seals and penguins). Because of this, icefish face little or no competition for the krill, small fish, and crabs they feed upon. They are also ambush predators, which means that their movement consists of short and infrequent bursts of speed. Without much in the way of extended physical activity, their bodies require less oxygen.

The cold water itself offers the hemoglobin-free icefish an additional benefit: it holds more oxygen than warm water. This is because molecules in cold water move more slowly than in warm water. When the molecules move faster, it is easier for oxygen to break free from the H2O molecule and escape. As a result, cold water ends up hanging on to more oxygen, which is useful for the organisms that require it.

Research suggests that the very first hemoglobin-free icefish ancestors were the result of a mistake—a genetic mutation that occurred sometime around five million years ago. Fortunately, because of their oxygen-rich environment, this mutation didn’t immediately doom the ancient fish to extinction. According to O’Brien, what it did do is force an extensive remodeling of the icefish cardiovascular system. This evolutionary tweakage resulted in the fish having four times the blood volume and three times the blood vessel diameter of a similarly sized red-blooded fish, as well as a heart more than five times larger than one might expect. This means that although icefish blood pressure and heart rates are low, the volume of blood that leaves the heart with each contraction is high. Additionally, once the blood reaches muscles and organs, extremely dense capillary beds help improve the efficiency of gas exchange. Finally, in one innovative evolutionary twist, icefish have no scales covering their bodies, and so oxygen uptake occurs not just through the gills but also directly through the skin.

So, yes, originally, perhaps icefish ancestors were lucky to have lived where they did. Now, though, they have successfully compensated for the species’ lack of hemoglobin—the vital oxygen carrier found in the blood of pretty much every other vertebrate in existence.

A creepy form of parasitism is one of evolution's favorite strategies, and scientists are starting to figure out how it works.
temples

The evolutionary marvel mates in love trains, can swim in the ocean, and even uses jazz hands as a defensive tactic.
science

Scientists observing a pod in the wild think the animals may choose specific species for a skin care wellness routine.
Video • Object of Intrigue