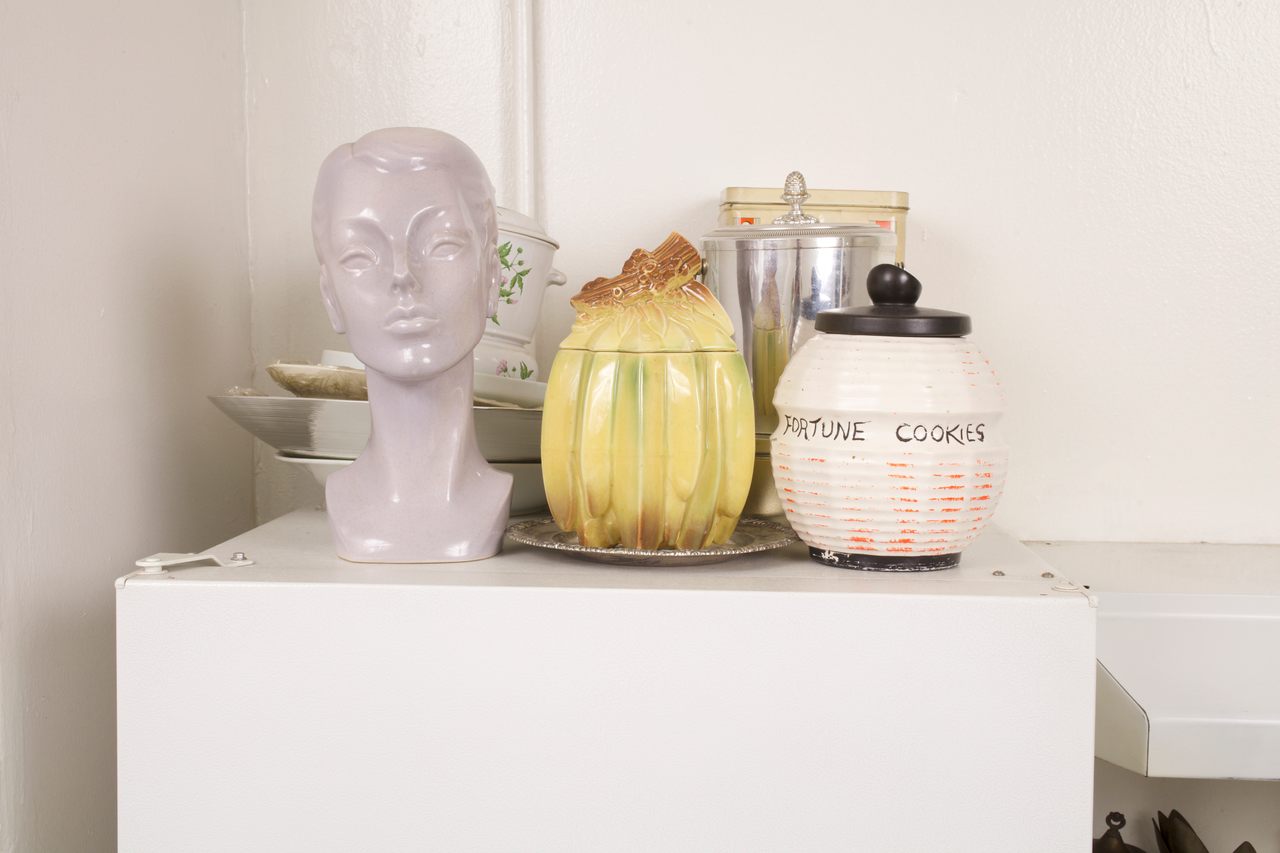 These two jars are a tiny fragment of Warhol's huge collection. André Grossman © The Estate of Christo V. Javacheff
In This Story
Destination Guide

Who stole the cookies from the cookie jar? Not Andy Warhol. While he wasn’t a cookie thief, the pop artist shamelessly burglarized supermarket aisles with his eyes, using the logos for Campbell’s soup, Coca-Cola, and Brillo pads as inspiration for his iconic paintings. And he had a thing for cookie jars, too. Warhol loved spending Sundays at New York’s flea markets, buying the kitschiest ones.

“Cookie jars are, after all, a form of Pop Art in themselves,” Wally Amos, Warhol’s friend and founder of Famous Amos cookies, once noted in an interview. He also remembered that Warhol “was particularly fond of the funny figural pieces.” Over Warhol’s lifetime, he collected 175 ceramic cookie jars, shaped like everything from clocks to Humpty Dumpty. “Having grown up as the child of poor immigrants in Pittsburgh during the Great Depression, he may have associated these objects with an idealized middle class that was well beyond his family’s means,” adds Lydia Yee, a curator at London’s Whitechapel Gallery who organized a 2015 exhibition of unusual collections belonging to artists.

This week, two of Warhol’s collectible jars are up for sale at Sotheby’s Paris, as part of an estate auction for the contemporary artist duo, Christo and Jeanne-Claude. The last time these ceramics were on the market was in 1988, as part of a 10-day sale of Warhol bric-a-brac at Sotheby’s New York that sold everything from the artist’s salt shakers to his watches. His cookie jar collection alone sold for a record-breaking $247,830, far exceeding estimates that it would sell for $7,000, total. Gedalio Grinberg, chairman of the Movado watch company, bid aggressively for most of the jars, while Stuart Pivar, an art collector and friend of Warhol, paid $11,550 for a few.

This spectacular profit was widely covered by the press, with many dumbfounded that the late Warhol’s fame could make even his cookie jars a hot item. No articles mentioned, though, that one of the cookie-jar buyers was the artist Jeanne-Claude. She returned home with two jars: one shaped like a bunch of bananas and the other molded like a Chinese lantern, labeled FORTUNE COOKIES.

“Christo never told me the reason why she was so keen to have them, but I guess he’s never really known!” says Lorenza Giovanelli, Christo and Jeanne-Claude’s studio manager. She notes that Jeanne-Claude did seem to have a fascination for serial collections, and that the artist pair shared interests with Warhol, such as his love of humble packaging. However, Christo and Jeanne-Claude’s projects tended towards the grand. They were best known for installations that swathed architectural landmarks in fabric—like the Pont Neuf in Paris and the Berlin Reichstag. Their last wrapped monument, a posthumous project, will be the Parisian Arc de Triomphe in September 2021.

At the couple’s SoHo home and studio, these vintage containers spent decades perched atop the fridge between a sculpted portrait bust and oversized serveware. Warhol allegedly stashed money in his jars, but it’s unclear if Christo and Jeanne-Claude ever filled these jars with maslenki (jam-filled cookies from his native Bulgaria) or macarons (from her native France). Since Jeanne-Claude passed away in 2009 and Christo in 2020, the cookie jars are now for sale once more.

In the end, maybe they were just sculptural objects to Christo and Jeanne-Claude. If so, they’d be in good company among other Americana aficionados, such as the members of the McCoy Pottery Collectors’ Society. Both the banana jar and the fortune cookie jar bear the trademark for the J.W. McCoy Pottery Company, which doesn’t guarantee their authenticity. The company began producing coveted ceramics at the start of the 20th century, and the antiques market is full of imitation McCoy tchotchkes, with articles the company never designed or sold bearing their logo.

So are they the real McCoy, and would Warhol have cared if they weren’t? The pop artist who made his fortune riffing off commercial branding probably cared little if his jars were fake. And if you’re willing to adopt a Warholian approach, you can get a questionable McCoy specimen on eBay for a bargain. The opening bids for Warhol’s jars at Sotheby’s start at 300€ each. Online offers for the banana-shaped jar have already climbed to 2,600€. Meanwhile, on eBay, $24.99 buys a dead ringer for the fortune cookie jar, but with some chips and wear. If you do buy it, feel free to steal some cookie jar provenance and say it belonged to Warhol, then Christo and Jeanne-Claude.

Not a gummy bear was spared during the Great Borough Bake-Off.
food

Some of these gingerbread cookies take months to make.
art

A series of gift guides for the curiosity-seekers in your life.
art