How an Ancient Himalayan Forest Wound Up at the Bottom of the Indian Ocean - Atlas Obscura
Want to see fewer ads? Become a Member. 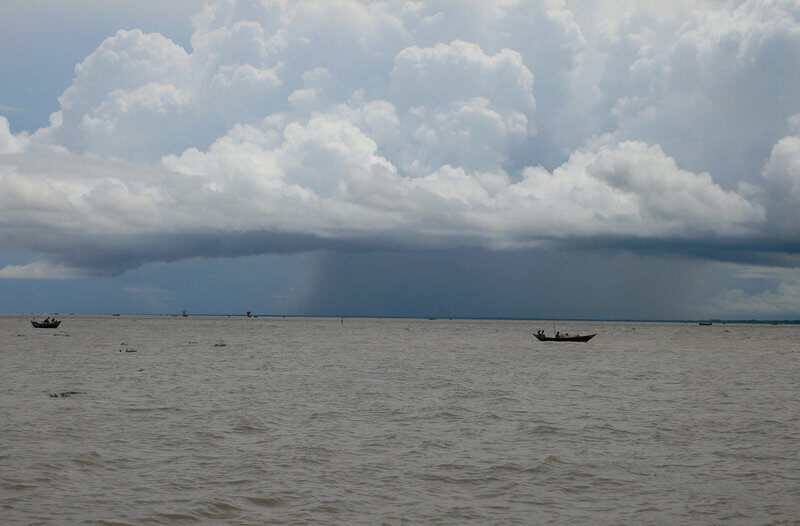 A monsoonal storm brews over the Bay of Bengal. Christian France-Lanord/Université de Lorraine

Approximately 50,000 years ago, scientists believe a coniferous forest in the Himalayas was uprooted by some catastrophic natural event—perhaps a colossal glacial melt or earthquake—and traveled miles down a mountainside toward the sea. Over a matter of weeks, the trees were likely obliterated by rocks and boulders, passing through modern-day Nepal and Bangladesh before settling at the bottom of the Bay of Bengal. It was quite a journey for a log.

Though it seems unimaginable for high-altitude trees to wind up under the ocean, an international group of researchers studying sediments in the Bay of Bengal have charted this prehistoric forest’s journey in a new study, published October 21 in Proceedings of the National Academy of Sciences. “People have seen wood being transported to the sea by rivers, and we’ve known it was a possibility, but did not know it could happen at this scale,” says Sarah Feakins, an earth scientist at the University of Southern California and co-author of the study. “We were not expecting it at all.”

The bottom of the Bay of Bengal is home to the Bengal Fan, which is around 1,900 miles long and 890 miles wide—the largest underwater accumulation of sediments in the world. Each year, the fan traps more than a billion tons of sediment flowing out of the Himalayan Mountains through the Ganges and Brahmaputra Rivers. “It’s been accumulating sediments for the last 40 million years,” says Christian France-Lanord, a geochemist at the French National Centre for Scientific Research. “It’s a fantastic archive for exploring deeper and deeper in time.”

France-Lanord decided he wanted to study Bengal Fan sediments way back in the early 1990s, in order to better understand the relationship between tectonics and climate change—how things like monsoons and erosion can affect global climate patterns. But at the time, no other scientists had plans to drill in the Bay of Bengal, and scientific drilling vessels do not often sail for just one researcher. 20 years passed before there were enough projects in the Bay of Bengal for France-Lanord to finally board the R/V Joides Resolution and take cores from its silty, sludgy bottom.

The researchers drilled at seven sites at the center of the fan. No one expected to find any intact organic matter. “They call it ooze because it just oozes through your fingers,” Feakins says. But in the ooze of the second core, they found the sludge peppered with small fragments that contained recognizable fibers. “It was a bit of a surprise to see these planks of wood, clearly of organic matter,” France-Lanord says. “There was so much wood.”

The wood had blackened and compressed over time, but there was no denying its vegetal origin. And when Hyejung Lee, a graduate student at the University of Southern California, sieved the sediments and studied its chemical isotopes, she found something even more surprising. Though the majority of the wood came from broad-leafed angiosperm trees, which would have grown by the coast, there were also distinct layers of chips that came from gymnosperms, or conifers. In the Himalayas today, conifers grow at high altitudes, nearly 10,000 feet above sea level. According to Feakins, conifers of 50,000 years ago would have grown in a very similar altitude. The researchers also found distinct carbon and hydrogen isotopes that identified the conifer chips as having grown at high altitudes, Feakins says.

“It could have been an earthquake or ice age release, something triggered a huge amount of material from the mountains,” Feakins says. “But it had to happen quickly because that wood is very pristine.” Though the researchers have no way of measuring the speed of the coniferous journey downriver, Feakins estimates it happened in a matter of weeks. “They didn’t sit around for a long time or they would have rotted.”

“I think it’s a very compelling interpretation of the findings,” says Bernhard Peucker-Ehrenbrink, a geochemist at Woods Hole Oceanographic Institution who was not involved with the study. Peucker-Ehrenbrink points out that this is not the first woody debris uncovered in offshore sediments, but its sheer quantity and quality is remarkable. “When I first heard of these layers, I thought of lake outburst floods in the Himalayas,” he says. “The river network then routes the ensuing debris to the coast, where the material is routed through submarine canyons into the deeper areas of the Bengal Fan.”

According to Feakins, these wood chips suggest that rivers functioned as a prehistoric pathway for carbon sequestration. “If a tree falls down in the forest, it starts to rot and decay,” she says. “But if it’s uprooted, transported down a river, and buried at sea, it doesn’t have time to decay.” For over 19 million years, rivers were responsible for exporting significant amounts of carbon following natural disasters such as monsoons and unusually large glacial melts. And the sheer amount of wood the researchers found suggests that there may be 50 percent more carbon buried in the fan than previously thought.

This kind of shuttling is no longer as easily possible down the Ganges or Brahmaputra, as dams and other structures have stanched much of its prehistorically powerful flow. “Natural ecosystems used to perform this service,” Feakins says. “But as we modify our rivers this affects the way that rivers move material.” According to Peucker-Ehrenbrink, if any catastrophic events were to happen now, he suspects the resulting debris would contain traces of human life, as well as wood.

The researchers hope to take cores from other sedimentary fans across the world to see if ancient forests lurk in those oozes, and if more of the world’s seafloor actually holds a secret vault of long-buried carbon. In her lifetime, Feakins doesn’t expect to see an event as rare and catastrophic as the one that buried the conifers 50,000 years ago. “We’d have to get really lucky for an event to happen while we were around, but obviously it would be catastrophic,” she says, pausing. “So actually we’d hope not to be around.”

1:32
Want to see fewer ads? Become a Member.
From Around the Web
Travel With Atlas Obscura
Are you a curious traveler?
Join local experts in 50+ destinations for a once-in-a-lifetime journey.
View Our Trips
Thanks for sharing!